Why are you talking to yourself?

Today's post is by Elmar Unnsteinsson (University College Dublin). Here Unnsteinsson asks why we talk to ourselves. 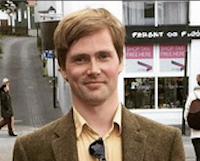 The other day I saw someone enjoying a walk while deeply engaged in conversation but I couldn’t see the other person. The ledge between us was too high. When I turned the corner I saw that the person was alone and actually talking to no one. Well, no one else I should say. It’s unremarkable that I had assumed that there was a pair of people, dancing conversational tango, but, it does raise the question why we think of conversation as, essentially, a multi-player game?
As a matter of fact, many of us thoroughly enjoy having conversations. We seek them out to achieve catharsis, form strong social bonds of trust and friendship, learn surprising new things, and obviously the list could be endless. So, it never even occurs to us to ask why we would spend our time talking to others. We couldn’t even list half of the good reasons to do so. Why is it then so surprising to us that people might get exactly the same types of enjoyment and benefit from talking to themselves? More poignantly, why is there such a strong social norm against self-talk, such that we experience shame and embarrassment when caught in the act?

In an article I recently published open access in Mind and Language, called ‘The Social Epistemology of Introspection,’ I try to show that talking to oneself and talking to others are much more alike than people have usually assumed. A little more precisely, I argue that the cognitive mechanisms, motivational profiles, and normal functions associated with each kind of action are essentially the same.
When we introspect our own emotions or attitudes we basically tell ourselves what we feel or believe, for reasons that are similar to the reasons why we would tell such things to others. But we also rely on the normal operation of a mechanism designed for communication; roughly, the mechanism underlying our capacity to intentionally produce cognitive effects in minded creatures.

There is reason to suppose that we can derive enjoyment and benefit merely from the skillful exercise of this singular capacity; just like the poet or public speaker we can seek the pleasures of communicative acts for their own sake. And so, it should not be surprising that people might like to talk to themselves. More surprisingly, perhaps, we should also expect various epistemic or practical benefits from self-talk, which would mirror the benefits of conversing with others. So, for example, by posing a question to myself directly in a communicative act, I may unearth an answer which otherwise might remain hidden from consciousness.

This does have other, more troubling consequences, however. Any malignant purpose we are afraid others might have in talking to us, we are just as likely to have ourselves in the privacy of our own minds. Thus, social epistemology has been too focused on various doxastic or epistemic effects of informational interactions between agents, to the detriment of studying the very same effects as they manifest themselves in reasoning and cognition themselves.
Perhaps, this is just the pernicious social norm against self-talk working its way into the work of the scientist. If we were more enlightened as a society about the potential pleasures of self-talk, we would presumably do more of it. In turn, we might also be more interested in exploring the non-pathological aspects of engaging in this – in this imagined world – common and unremarkable activity. It never occurs to us to ask why chess players would bother playing chess to themselves. And why would we not train or just enjoy the exercise one of our most cherished capacities, namely the capacity to converse?