The 2016 edition of the Arts and Science Festival at the University of Birmingham, whose theme was memory and forgetting, took place between 14th and 20th March. The festival showcased research and collaboration at the University through talks, exhibitions, performances, workshops and screenings. Project PERFECT and the Costs and Benefits of Optimism project hosted a lunchtime event open to the public, Tricked by Memory, organised and chaired by Lisa Bortolotti.

The talk by Magdalena Antrobus (pictured below) was entitled: "Sometimes I get lucky and forget. Depression, memory and negativity bias". First, she explored the relation between depression and the way we remember things. Magdalena discussed the phenomenon of depressive realism and asked whether suffering from low mood may enhance the accuracy of our memories. Second, she presented evidence suggesting that in severe forms of depression people remember their past in an overly negative way: they concentrate on painful experiences and ruminate their failures. This may affect both their well-being and their knowledge, leading to psychological and epistemic costs. Finally, Magdalena asked whether, in the light of the evidence she presented, memory loss in depression might be seen as adaptive. 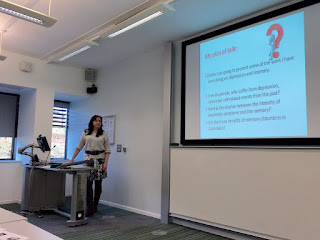 Anneli Jefferson (pictured below) presented a talk with the title: "Distorting the past to serve our present needs". She argued that when we forget and misremember events, such inaccurate memories are not just glitches in the system. They serve the purpose of enhancing our self-image in a number of ways, enabling us to make sense of our past and to feel better about ourselves. Anneli considered several examples (such as memories about a past relationship) and asked whether we should think of the overall effect of inaccurate memories as harmful because they foster a mistaken view of ourselves and our past, or as beneficial because of the confidence they lend us. 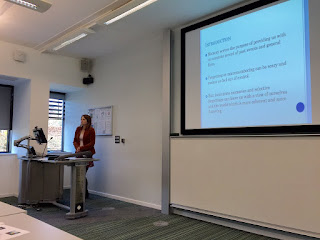 The last talk of the series was by Kathy Puddifoot (pictured below): "Tricked by memory or tricks of memory? Memory distortions as tricks of the mind". Kathy described some of the inaccuracies of our memory, including the fact that we tend to remember the rough gist of what happened to us but misremember the details. For instance, we might remember meeting our friend last week, but it was three weeks ago. We might think that we were lost in a supermarket as children when it was really our sibling who was left behind. In such cases, we are tricked by our memory. But Kathy also showed how these cases can also be understood as highlighting tricks of our memory, that is, ways in which memory enables us to navigate our environment successfully. This involves understanding that memory is about recalling events from the past but also about making predictions about the future. 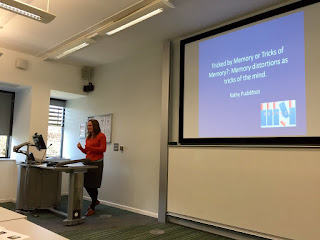 The session closed with the three speakers taking questions and comments from the floor. Judging from the active engagement of the audience and their generous feedback on the event, the talks were a success and invited further reflection on the strengths and limitations of human memory. 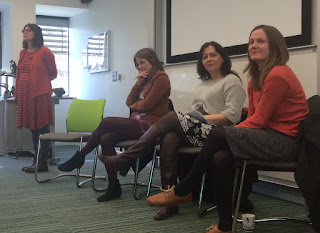