This post is by Ema Sullivan-Bissett, Lecturer in Philosophy at the University of Birmingham, and previous Research Fellow on Project PERFECT. 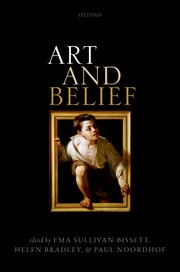 Together with Helen Bradley and Paul Noordhof, I have edited a collection Art and Belief, recently published with Oxford University Press. The volume consists of twelve new essays at the intersection of philosophy of mind and art.

Our appreciation of artworks raises substantial challenges for our understanding of the cognitive attitudes involved, specifically, beliefs and related attitudes. Some of our beliefs concern the quality of the work in question. Others will derive from the content of the work, reflecting the commonly held view of art as a source of truth and knowledge. Both kinds of belief bring challenges for orthodox understandings of belief.

The volume is divided into four sections which explore a variety of questions on art and the nature of belief.

Can we form justified beliefs upon author testimony? Kathleen Stock (‘Fiction, Testimony, Belief, and History’) argues that authors of fiction can pass on matters of empirical fact, and that there are no special problems with the testimony of authors of fiction.

Also optimistic about testimony in fiction is Eva-Maria Konrad (‘Signposts of Factuality: On Genuine Assertions in Fictional Literature’), who argues that a fictional text can consist of both fictional and factual discourse, with the latter being reliable sources of knowledge.

In contrast, Anna Ichino and Gregory Currie (‘Truth and Trust in Fiction’), conceive of testimony as the highest point on what they call the expression spectrum, and argue that the expression of belief in fiction is usually below such a point, and as such fiction falls short of being a case of genuine testimony.

If a work is one of fiction, it might be thought that it has no epistemic role to play. The second section of the book includes authors arguing for broadly positive conclusions about the epistemic value of fiction. James O. Young (‘Literary Fiction and True Beliefs’) claims that justified beliefs can be gained from fiction in virtue of its ability to present to readers perspectives on the world which they can adopt.

Allan Hazlett (‘Imagination that Amounts to Knowledge from Fiction’), argues for a new process of knowledge acquisition resulting from engaging in fiction. Taking fictions as invitations to imagine, he argues that imaginings engendered by fiction can amount to knowledge, regardless of whether this is consistent with the idea that a necessary condition on knowledge is belief.

Lucy O’Brien (‘The Novel as a Source for Self-Knowledge’) closes this section of the book, arguing that although it is difficult for novels to transmit truths to readers directly, they can provoke in their readers reactions which constitute evidence for beliefs about the self.

Studies of fictional persuasion seem to show that subjects’ real world beliefs change when they engage with fiction, but the beliefs gained are unstable, unjustified, and unreliable. These features might suggest that attitudes gained from fictional persuasion speak to (or perhaps against) the claim that beliefs are aimed at truth. Lisa Bortolotti and I (‘Fictional Persuasion, Transparency, and the Aim of Belief’) argue that a biological account of the connection between belief and truth is unthreatened by the findings from fictional persuasion, but that teleological accounts of the aim of belief (those in which the believer herself aims at truth in forming beliefs) are untenable in light of such findings.

In his paper (‘Fictional Persuasion and the Nature of Belief’), Asbjørn Steglich-Petersen focuses primarily on arguing for the compatibility of fictional persuasion with truth as the biological function for belief. In addition, he responds to mine and Lisa’s argument against the teleological account. Finally, Wesley Buckwalter and Katherine Tullman (‘The Genuine Attitude View of Fictional Belief’) argue for a doxastic reading of attitudes from fiction. They offer several objections to the non-doxastic view based on behavioural outputs of attitudes from fiction, the functional role of belief, and neuroscientific evidence.

In the final section of the book, two authors explore the relationship between art and testimony, specifically, addressing the question of whether testimony is a legitimate source of aesthetic judgement. Jon Robson (‘Against Aesthetic Exceptionalism’) argues against a position which has it that aesthetic judgements are beliefs, and that these judgements cannot legitimately be formed on the basis of aesthetic testimony because they are subject to additional norms. He argues that pessimism about aesthetic testimony is untenable since it is in tension with various accounts of the nature of belief, and drives an unjustified line between aesthetic beliefs and other beliefs.

Daniel Whiting (‘Don’t Take My Word for It: On Beliefs, Affects, Reasons, Values, Rationality, and Aesthetic Testimony’) closes this section, and the volume, arguing that it is not possible to acquire aesthetic knowledge (or even rational aesthetic belief) from testimony alone. In arguing for this view, Whiting considers the way in which belief in the value of a work is supposed to serve as a causal and rational basis for affective responses to it.

Issues regarding the proper classification of mental states, how this relates to the role they play, as well as the way in which they are ideally generated, are ones of interest to philosophers of art and philosophers of mind. The interaction of philosophers working in aesthetics and mind is apt to lead to developments on these issues. Our hope is that this volume makes attractive such continuing interaction.