The Copenhagen 2017 School in Phenomenology and Philosophy of Mind 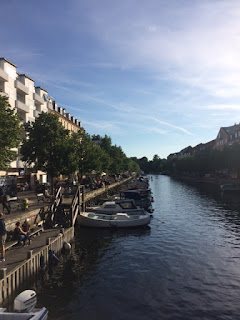 The Copenhagen Summer School in Phenomenology and Philosophy of Mind is an annual event organized by the Center of Subjectivity Research . It aims to provide essential insights into central themes within the philosophy of mind, viewed from a phenomenological perspective. The general topics covered this year were intentionality, experience, reflection, perception, attention, self-awareness, rationality, normativity and methodology.

Over a period of 5 days, the schedule included keynote lectures, PhD presentations, discussion groups and seminars. The late afternoons and evenings were dedicated to different social events (such as visits to the city, a harbour tour) which allowed for opportunities to exchange ideas amongst researchers. In this post, I give a detailed summary of the main points made by the keynote speakers. 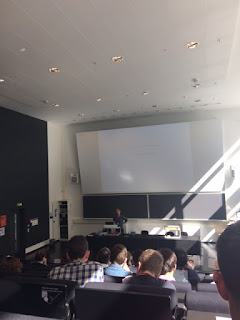 The idea of embodiment that Overgaard argued for is that in which at least some mental states extend all the way to the perceptible surface behaviour. In his view, a joyous smile on someone’s face is part of the mental state of joy in so far as it may carry information about the emotion. According to an intuitively plausible view that he labels the ‘Dependency Thesis’, SPT depends in specific ways on Embodiment. But he considers that in the context of the mindreading debate the Dependency Thesis is false. 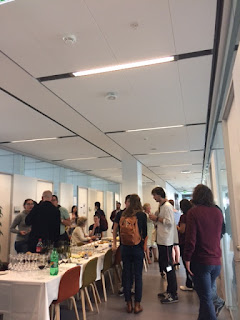 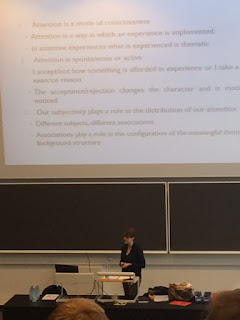 On the second day Hanne Jacobs gave a talk on Attention, Reason and Subjectivity. According to Jacobs, Husserl’s account is worth considering when trying to understand what we do when we make up our own (embodied, personal, and socially embedded) minds. Based on Husserl’s phenomenology, she proposed that attention is a mode of consciousness in which we exercise reason.

She argued against contemporary authors who defend the idea that Husserl’s phenomenology proposes that there is a non-discursive form of rationality present in pre-predicative perception. She proposed instead that Husserl ties the activity of reason to the capacity for reflection in at least one significant sense. That in which, when we are attentive to something and take something to be in certain way and not other, we are also pre-reflectively aware of the reasons that there are are for and against our taking something to be in such specific way.


She argued that Husserl’s account of intentionality suggests that attention is the actualization of our capacity for rationality. Lastly she proposed that this account of attention and its relation to the exercise of reason and our subjectivity can contribute to some additional discussions on topics which are at the intersection of philosophy of mind and epistemology such as epistemic agency and interpersonal disagreement. 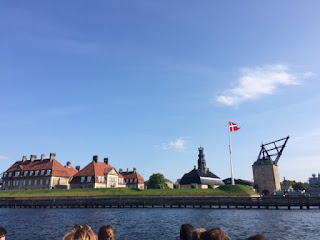 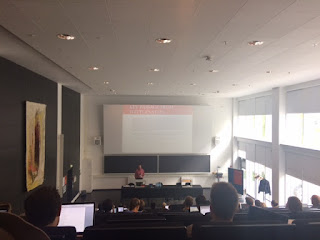 On the third day David Cerbone talked about Ground, Background, and Rough Ground in Phenomenology. Cerbone’s talk proposed to understand the idea that all experience involves a background. He started by considering Hubert Dreyfus’s reading of the Heiddegerian notion of background understanding of being. In this view the notion of background helps us understand how the everyday practices, skills and distinctions in which we are socialized provide the conditions to pick out specific objects and not others, to understand ourselves as subjects and to make sense of the world and our lives.

But these practices can function only if they remain in the background. Trying to put what lies in the background in belief-like propositional form would be to distort it. To Cerbone, Dreyfus’s emphasis on the inaccessibility of the background raises questions about the viability of phenomenology and our possibility of reflectively criticizing our basic ways of making sense of things. 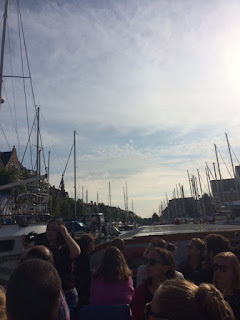 Drawing upon ideas from the later Wittgenstein, Cerbone challenged this conception of  background and proposed what he called a deflationary conception instead. In this deflationary conception there is no ‘there’ in terms of the background and therefore no infinite task of explaining ‘it’. There is thus nothing inherently mysterious about the notion of background. What there is instead is just our acting and talking any moment of which takes place – and makes the sense it does – against an indefinitely appearing background.

Drawing on what Wittgenstein calls at Investigations § 242 agreement in “judgments”, Cerbone proposed to consider the ethical dimensions of speech. That is, making sense to one another is itself an infinite task whose accomplishment depends upon a shared background. The background in his view is that which is shared, and presupposed. It is not something fixed or determined but it can be critically assessed. And what lies in the background can be less problematic to understand, and can in this way become itself a part of the foreground. Finally Cerbone argued that phenomenology might in this way be understood positively as addressing how particular ways of making sense depend upon others being taken for granted or assumed; recognizing and addressing these assumptions is part of the ongoing ethical challenge of making sense of and to one another. 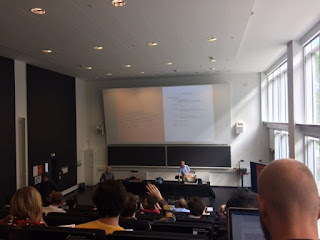 On the fourth day Rudolf Bernet gave a talk about Philosophy and Literature – Literature and Philosophy. Bernet explored how language and the imagination of possibilities can shape our personal identity and the meaning of real facts. He argued that the unrealized personal potentioalities can be unfolded by fictions and narratives and that this can make way for a real change in their lives. What makes this possible, Bernet argued, is that narratives and literary pieces offer the possibility of distancing us from our own selves and thus refine our emotional sensibility. Bernet started his talk by pointing that just like memories, pure phantasies are intentional acts. But unlike memories, pure phantasies implicate the reproduction of an unreal or fictive ‘quasi-perception’.

To Bernet, this opens the possibility of a division of the imagining subject into a ‘real-ego’ and a ‘phantasy-ego’.When we consider how imagination relates to the objects of a possibly actual experience, the opposition between what is real and what is unreal in phantasy loses significance. Imagined unreal objects can be perceived and thus become real objects of actual perception. But this is only possible when acts of phantasy fulfill specific objective and subjective conditions. That is when we can one speak of a ‘real possibility’. On the other side, he argued, since these objects of phantasy do not really exist, they can offer an insight into the essential constituents or ‘essence’ of a certain type of objects and of their intentional experience.


In reply to the question of what is the relation between essences and imagination? Bernet explained that to Husserl, essences have a reality of their own, which he calls ‘irreal’. That is, these are essential and necessary conditions of the possibility for both empirical and ideal objects. And these are different from the merely imaginary ideal possibilities that are unreal or opposed to a real possibility. Bernet argued that according to Husserl what we know about the real world does not come only from our empirical intuitive experience of real facts. Real facts depend on both empirical and ideal conditions of possibility. So, real and ideal conditions of possibility do not exclude each other. On the contrary, Bernet quoted: “What is really possible must also be ideally possible.”(Hua XX/1, pp. 178-179) 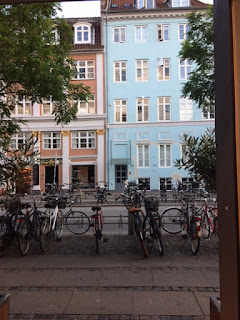 Dan Zahavi presented The Minimal Self Revisited on the last day. Zahavi first gave an overview of the main ideas and motivations behind the introduction of a minimalist notion of self. In this view of the self, episodes characterized by a subjective what-it-is-likeness, or phenomenally conscious episodes, are not just episodes that take place in a subject without the subject’s awareness. Zahavi also argued that in this view selfhood is a built-in feature of our experiential life.

As for every possible experience we might have, regardless of whatever it is like for me to have the experience, it is for me that it is like that to have the experience. The experiences I am living through present themselves differently to me than to anybody else. These episodes are like something for the subject and in this sense they are necessarily pre-reflectively self-conscious. This what-it-islike-ness is what-it-is-like-for-me-ness. And this for-me-ness refers to the first-personal presence of experience which is an integral part of experiential life. It does not denote a specific experiential content and it is not something that exists independently or separately from the stream of consciousness. And this first-personal presence, this for-me-ness, amounts to a primitive and minimal form of selfhood. 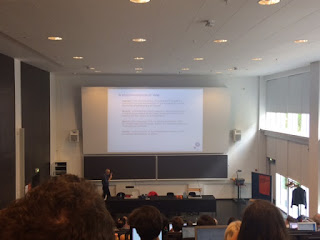 Secondly, Zahavi addressed a number of criticisms and challenges that the notion of minimal self has had to face. One of the objections relates to the need for making a distinction between subjectivity and selfhood. And that subjectivity is only a necessary and not a sufficient condition for selfhood. To Zahavi the dispute is about whether it is better to distinguish between subjecthood and selfhood rather than between different levels of selfhood. And this to him is a terminological dispute. 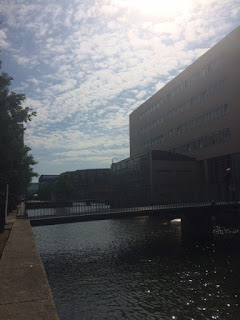 These were very interesting 5 days.