Why can’t we think of mental disorders as being mental?

I’ve recently taken up a new post as Senior Clinical Research Fellow in the Department of Psychiatry at the University of Oxford, but prior to that was Associate Clinical Professor of Psychiatry at Warwick University and Lecturer at the Institute of Psychiatry, King’s College London, and it was during a Journal Club at the IoP where I first met Lisa Bortolotti and we began our collaboration.

A month ago I was delighted to take part in a public philosophy event at the European Institute of the LSE, as part of their Consilience series, devoted to mental illness.  The format was that, together with two colleagues, Tim Thornton and Bonnie Evans, we were asked to talk about the nature of mental illness prior to the chair, Kristina Musholt, opening the discussion to the floor.

The event came slightly prior to the publication of the DSM 5 and I opened by starting with the definition of mental disorder, which is:
‘a behavioral or psychological syndrome or pattern that reflects an underlying psychobiological dysfunction. Consequences of which are clinically significant distress or disability that must not be merely expectable response to common stressors and losses, a culturally sanctioned response to a particular event, or a result of social deviance or conflicts with society’ (APA, 2013).
In papers, Lisa and I have explored ways in which mental disorders have been conceptualized (Broome 2006; Bortolotti and Broome 2009; Broome and Bortolotti 2010), including pragmatic and instrumental conceptions, biological realist conceptions as well as eliminativist positions. After briefly reviewing these, I summarized the empirical data we had from psychiatrists themselves demonstrating the heterogeneity of their views regarding mental disorders (Harland et al., 2009).  Against this background, I then tried to defend the view that we can have an idea of disorder in the realm of the mental without being dualists and without having to feel pressure to reduce or translate this conception wholly into neuroscience, and drew on issues of normativity, both epistemic and moral, that have been suggested to be integral to the definition of key features of psychopathology, such as delusions and personality disorder.


In parallel, and with colleagues at the Maudsley Philosophy Group, we have tried to archive and re-introduce to contemporary psychiatry ‘thick’ detailed descriptions of mental disorder that may expand the ways philosophers can think of the normative elements that may describe mental disorder most accurately, and  are in turn, the elements that make such mental states disordered.  For example, a type of interpersonal interaction in personality disorder, a manner of reason-giving and justification in delusions. 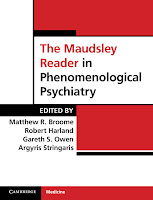 This culminated in the publication of The Maudsley Reader in Phenomenological Psychiatry, a book that collects many important phenomenological accounts of mental disorder including schizophrenia, mania, depression, and obsessive-compulsive disorder. 2013 also marks the centenary of the publication of Karl Jaspers’ General Psychopathology and many of these themes will be explored more fully in a one-day conference celebrating this publication at the Royal Society of Medicine in October 2013.