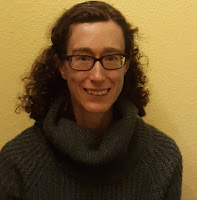 The Meaning of Travel

Today's blog is by Emily Thomas, Associate Professor of Philosophy at Durham University, and Honorary Fellow at ACU’s Dianoia Institute of Philosophy. She is the author of Absolute Time: Rifts in Early Modern British Metaphysics (OUP, 2018) and The Meaning of Travel: Philosophers Abroad (OUP, 2020). She tweets @emilytwrites.

The Meaning of Travel has been reviewed in The Spectator, and Literary Review. Emily has written about the connections between travel and philosophy in The Conversation, and about the philosophy of walking for OUP's blog. She has been interviewed about the book on BBC Radio 4’s Start the Week, and BBC Radio 3’s Free Thinking.

The book explores their history. For example, it explains how philosophers became interested in travel around the Age of Discovery. It looks at what Descartes thought travel could do for us; and the role that travel played in the debates about philosophy of science between Francis Bacon, the Royal Society, and Margaret Cavendish. It explores the effect that Henry More’s theory of space, and Henry Thoreau’s Walden, had on mountain tourism and wilderness travel.

The book also looks to some of philosophical issues facing travel today. For example, it asks whether ‘last chance to see’ travel, to ‘doomed’ places like glaciers and coral reefs, is ethical. It argues that ‘travel’, and ‘philosophy’, are male concepts: this helps us to understand the under-representation of women in these fields, and the way women travellers have traditionally been treated. The final chapter looks forwards and upwards - to space travel.

This is a popular book, and the writing is quite different to my previous, scholarly book on early modern metaphysics. It’s loosely assembled around a travelogue, a trip I took to Alaska. That means it’s written in the first person, and I am much more in the book than I’m accustomed to. It was a lot of fun to write, partly because it offered the opportunity to collect ideas I found amusing.

For example, Plato’s Republic has the following pieces of advice for the (male) traveller. On returning home, Plato writes he must report to a council of state where, if the traveller has become ‘appreciably better’, he will be rewarded with higher recognition. However, if the traveller has ‘returned corrupted’, he must talk to no one ‘young or old’. If he later meddles in some educational or legal question, ‘he must die’.

In this post, I discuss the relationship among confabulation, choice blindness, and self knowledge. That is the theme in a new open access paper by Ema Sullivan-Bissett and myself, published in Synthese, as part of a special issue entitled: "Knowing the Unknown: Philosophical Perspectives on Ignorance".


When subject to the choice-blindness effect, an agent gives reasons for making choice B, moments after making the alternative choice A. Choice blindness has been studied by the Choice Blindness Lab in Lund in a variety of contexts, from consumer choice and aesthetic judgement to moral and political attitudes. Below you see an image of the set up of one of the studies where people were shown photos of strangers and asked to choose the most attractive face.

Choice blindness is often described as a form of confabulation. When people confabulate they tell a story that they believe to be correct, but the story is not grounded in the evidence. That is because people are not aware of some of the causal factors responsible for their choice. Clearly, there are important similarities between confabulation and choice blindness, and both phenomena have been discussed in the philosophical literature to argue for the limitations of self-knowledge claims.


However, we believe that the phenomena of confabulation and choice blindness are significantly different. In confabulation Anna chooses chocolate ice-cream because her sister did, but when she is asked about her choice, she explains it by appealing to different reasons, e.g., that chocolate is her favourite ice-cream flavour. There is no doubt that Anna is aware of what her choice was, but what she gets wrong is the causal process leading to her choice. Anna confabulates reasons for her choice.

In choice blindness Anna is asked by her mum whether she wants vanilla ice-cream or chocolate ice-cream and she says: “Chocolate”. Her mum mishears her and replies: “Vanilla is an excellent choice, my dear. Why did you choose it?” Anna answers that vanilla is a more delicate flavour than chocolate. Now, it is not clear whether Anna knows what her choice was, because she seems to consent to her mum’s incorrect choice attribution and, further, provides reasons for a choice that is different from the choice she explicitly made.

In the second scenario, to say that Anna confabulates reasons for her choice does not sound right. Rather, there are two ways in which we can describe what happens to Anna. She either attributes to herself (and gives reasons for) a choice she did not make, ignoring what her ‘real’ choice was (choice error); or she makes two different choices in quick succession, and she only gives reasons for the latter (choice change).

Not only is the challenge to self-knowledge different in the two scenarios—as confabulation does not threaten the correctness of one’s choice attribution but simply the groundedness of the explanation provided for it—but it is also unclear in what respect choice blindness involves confabulating reasons.

How To Be Trustworthy

This post is Katherine Hawley, Professor of Philosophy at the University of St Andrews. Here she introduces her new book, How To Be Trustworthy (OUP 2019). 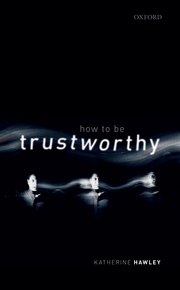 I set out to write a book about trust, that powerful attitude we sometimes adopt towards other people, towards social institutions, sometimes even towards inanimate objects. But instead I ended up writing a book about trustworthiness, and about the ways in which tough circumstances can make it difficult for us to be trustworthy, no matter how well-intentioned we are. I was led from trust to trustworthiness by thinking about situations where trust is absent, and about what can happen when trust is misplaced.


When we think about misplaced trust, we often think first about deception or inadequacy: our trust is misplaced if we direct it towards dishonest manipulators, or towards well-meaning types who nevertheless cannot live up to our expectations. Either way, when we’re faced with untrustworthy people, distrust rather than trust helps protect us from harm, whether emotional or practical.

But in other situations our trust is misplaced not because it is directed towards someone who is untrustworthy, but because that trust is an unwelcome, uninvited imposition into the lives of others. Unwanted trust can be a burden. Even when people have the capacity to live up to our expectations, doing so can distort their own priorities, big or small. But when people resist the pressure of unwanted trust, that often means that we regard them – unfairly! – as untrustworthy. In such situations, our trust is misplaced, but we shouldn’t be distrusting either: we should refrain from both trust and distrust.

In How To Be Trustworthy, I argue that trustworthiness requires us to avoid unfufilled commitments and broken promises. But where others misunderstand a person’s commitments, they may mistakenly regard her as untrustworthy for not acting as they expect. In my view this really is a mistake: being trustworthy does not mean living up to other people’s expectations even when they are unreasonable. But such mistakes are common, and are not easy to correct, especially when the mistaken person wields more social power. 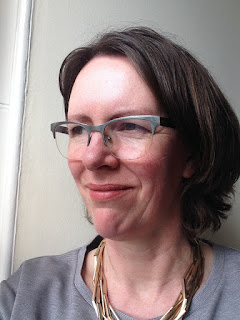 There is no straightforward resolution to this problem, no recipe for being trustworthy. One option is to be clear and careful to a fault about exactly which commitments we’re taking on, and which we reject. But that kind of fastidiousness is tedious for all concerned; it doesn’t make for relaxed working relationships, friendships, or neighbourly good cheer. Another option is just to go with the flow, trying to conform to others’ expectations whether they are reasonable or not. But that will soon lead to disaster, as we try to jump in several different directions at once, with no time left to cultivate our own interests and projects.

Instead, we must muddle along in the middle, trying to say a clear ‘no’ when that’s important, yet acknowledging that we cannot always control what commitments we incur, nor micro-manage other people’s opinions of us. That’s life. But whilst I explore this middle ground in the book, I also illustrate the many ways in which this balancing act is made easier for people who live in stable, supportive social environments, for people with predictably good health, and for people who are materially comfortable. When you have insurance – literal or figurative – it is easier both to control your commitments and to cope with unwanted trust. Being trustworthy is not a simple matter of ‘good character’, it is a practical challenge for all of us, and especially those whose lives are difficult through no fault of their own.