Philosophy for Girls: An Invitation to the Life of Thought

Today's post is by Melissa M. Shew and Kimberly K. Garchar. They present their new book, Philosophy for Girls: An Invitation to the Life of Thought (OUP 2020). 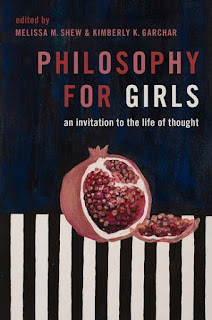 Despite social and institutional improvements, women and girls are routinely discouraged from full participation in intellectual and civic life. Kamala Harris’s recent refrain of “I’m speaking, I’m speaking” in a debate against Vice President Mike Pence evidences the ongoing challenge that women face in having their voices--and therefore their ideas--truly heard.

This disrespect of women’s intellectual expertise occurs in nearly all aspects of our lives, so academic philosophy is no different. The chronic erasure of women’s voices in content, meager representation in philosophy syllabi, persistence of all-male panels in philosophy, and dominance in faculty meetings evidence the gender disparity in education.

This gap is harmful not just to women who are unable to fulfill their philosophical potential as a result of biases and stereotypes but also to the field of philosophy itself insofar as the philosophical potential of women remains untapped. Some of the best work remains unexplored and unpublished. More fundamentally, girls do not see their experiences represented, analyzed, and addressed in academic philosophy, and young women are not culturally encouraged to think philosophically about their lives.

This revolutionary book aims to address this gender disparity, both in academic philosophy and the wider world. It invites and encourages girls and young women to think broadly, creatively, and critically about a host of enduring questions from the nature of autonomy and identity to ways to respond to an unjust world. Philosophy for Girls empowers young people intellectually and encourages them to find the joys of hard thinking; readers are thereby encouraged to pursue an examined life and live philosophically. We insist that girls have a right to intellectual conversations from which they have largely been excluded.

The collected volume of vibrant and clear but simultaneously rigorous essays by women philosophers evidences that women are indeed outstanding philosophers and that young women have a great capacity for philosophical thinking. The book cites nearly only women, and each chapter opens with an anecdote about a girl or woman from mythology, science, literature, or history.

Particular pathways for intellectual exploration are outlined in the book’s Introduction, with the hope and expectation that those pathways will become readers’ own pathways and that they will enter into conversation with others about topics in the book. This book, then, serves as an overdue correction to the hundreds of anthologies that supposedly represent the life of thought, but that nonetheless remain almost exclusively male-dominated. Consequently, this book serves as a small contribution to larger movements of equity and inclusion in intellectual life as a whole so that all are affirmed in their capacities as knowers.

The book thus has both epistemic and ethical goals: We want girls to embrace their existence as thinking agents and make the world better in the process. Simultaneously, we aim to provide avenues for young women to enter the field of philosophy through the work of women scholars and prose that explicitly includes young women in its enduring questions.

In light of the current climate for women in the profession as well as in our world, this book is a significant contribution to girls’ philosophical inquiry, both formally and informally. As such, this book is timely and urgent though it grapples with enduring questions of the human condition.

From Bad Thinkers to Vice Epistemology

This post is by Ian James Kidd, Heather Battaly, and Quassim Cassam. They present their new book, Vice Epistemology, which was published by Routledge five days ago. 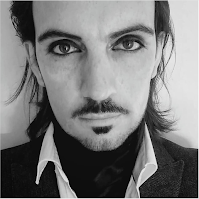 Ian Kidd
Study of the human epistemic failings has been a staple theme of philosophy since antiquity. Ancient Greek, Indian, and Chinese philosophers were all concerned with ignorance, stupidity, and prejudiced and biased ways of thinking – ones opposed to such high-fidelity philosophical goods as wisdom, certain knowledge, or rationality. Attempted amelioration of those epistemic failings has been an aim of ethics, logic, and the more overtly ‘therapeutic’ forms of philosophical practice, too. Obviously, our world remains populated by human beings with very many epistemic failings, a glum fact reiterated by contemporary research in empirical psychology, philosophy of mind and epistemology. Such work offers a whole range of conceptual tools for the study of those failings and one of the newest is that of an epistemic vice. 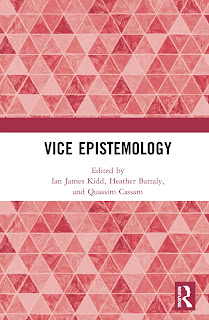 Vice Epistemology
Epistemic vices are character traits that make us bad thinkers. Usually we think of vices and virtues in relation to ethics. The vices include cruelty and dishonesty and selfishness – failings of character that make us bad people and which are corrected by the cultivation of virtues and other excellences of character, like compassion and honesty. But we shouldn’t confine ‘vices’ to moral failings of character. We speak of vices of the mind, too, like arrogance, dogmatism, and closed-mindedness (“He’s so arrogant!”, “She’s so dogmatic!”). Alongside those examples, there are also less-obvious epistemic vices, with names like ‘epistemic insouciance’ and ‘epistemic self-indulgence’. 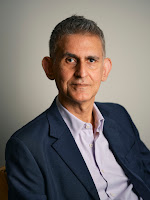 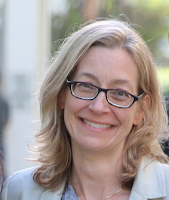 Heather Battaly
Second, the identification and analysis of specific vices, whether the familiar ones, like dogmatism, or the more esoteric ones, like epistemic hubris. After all, there’s no good reason to suppose that we have a clear view of all of the epistemic vices to which we are prone, given the historical contingency of our inherited conceptual resources.
A third sort of work is what might be called applied vice epistemology – the effort to put these conceptual tools to work in the world. An obvious reason we’re interested in epistemic vices is because they play a role in the social and political world. We’re sadly living through a golden age for arrogance, dogmatism, and insouciance about the truth. It’s no coincidence that contemporary vice epistemology takes so many of its case studies from modern politics. But epistemic vices are also relevant to more abstract issues in ethics, epistemology, and psychology, too. Whatever ones’ own interests, our hope as vice epistemologists is to better understand our stubborn and entrenched epistemic failings.
Posted by Lisa Bortolotti at 08:00 No comments:

The Concept of Loneliness

This post originally appeared as a Birmingham Perspective on the University of Birmingham website, authored by Valeria Motta. In the post, Valeria summarises her view of loneliness on which she was also recently interviewed by Radical Philosophy's host, Beth Matthews (podcast available, part 1 and part 2), for Melbourne 3CR Community Radio. 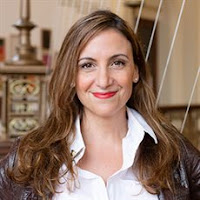 Research has provided different definitions of loneliness. Some have focused on the multifaceted nature of loneliness - addressing the interaction between specific behaviours (different forms of inhibited sociability), emotions (feeling unloved or unwanted) and thoughts of negative and self-depreciating nature. While other research has focused on cognitive aspects (e.g. the discrepancy between the relationships we wish we had and those we perceive we have). In such definitions, loneliness is also regarded as a subjective experience. However, the this subjective aspect is often described as something ‘private’, which obscures the experiential features that are essential to understanding loneliness.

A common thread that runs through all the current definitions is the tendency to focus on social distress. This originated with awareness that social relations play a fundamental role in psychological well-being. It has led mental health researchers to integrate work on loneliness and social support. However, the social disruption of loneliness is just one aspect of the experience. Sociality or being around others is affected in many dysfunctions such as depression and social anxiety. Therefore, excessive focus on social relations when we define loneliness does not allow us to investigate the particularities of the experience and to distinguish loneliness from other experiences that are as socially disruptive.

My research is about loneliness and solitude, but I am not just interested in people’s experiences of these phenomena. I am also interested in understanding the phenomena at a conceptual level. And for this I’ve been carrying out research interviews with groups of people who have different perspectives on those phenomena. What makes my research different from other people’s research on loneliness is that it is a combination of philosophical argument and phenomenological-psychological investigation.

In the analysis I discovered how seemingly different descriptions were pointing at some characteristics that could be structural of those experiences. I discovered interesting things. Loneliness includes experiential abnormalities that may result in, or be provoked by, different alterations in our experience of time, or even by fluctuations in the intensity, quality and meaning of loneliness, according to context. Another important aspect to note about the experience of loneliness is that the different forms of contact that a person has with her physical environment may have consequences for how she interacts with the social environment, for whether this evolves into a social disruption problem.

Further research needs to disclose the mechanisms involved in our capacity to adapt to different environments, and analysis on whether such a capacity allows for social adaptation.

Social disruption is not the sole ground for research on loneliness: there may be other more fundamental aspects at the onset of the experience. Understanding absences and other aspects of loneliness experiences seem likely to be important features. We need definitions of loneliness that address a wide array of life events and of disturbances in the subjective structure. Exploring the issues raised here would have implications for our terminology and our future research on types of loneliness. And these would in turn allow for the design of new treatments and interventions. 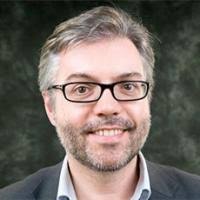 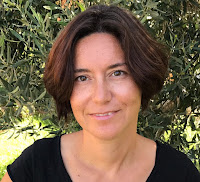 Lisa Bortolotti
Acknowledging and further examining the causal contribution of affective instability to paranoia is not incompatible with the main models of delusion formation currently discussed in the empirical and philosophical literature.
It has also significant implications for prevention and treatment. For instance, instability of mood would need to be addressed in the attempt to prevent psychotic episodes. People at risk of psychosis would need to be supported in implementing lifestyle changes that are conducive to an improvement in emotional regulation, such as sleeping better.
Posted by Lisa Bortolotti at 08:00 No comments: