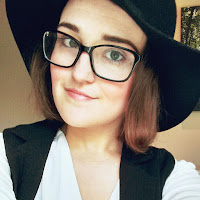 Today's post is by Sophie (pictured above), a Journalism student who has health anxiety, social anxiety and OCD. Sophie writes several blogs, and is on Twitter. The post you can read here is an extract from a longer post previously published in The Musings of a Journalism Student on 19th July 2015. We repost it on our blog with her permission, for our series of posts by experts-by-experience.

I recently watched a documentary called Kids in Crisis which featured young children and teenagers who had mental health problems. These children had a formal diagnosis. I’ve also had a family member recently diagnosed with reactive depression, who is merely a young person themselves. That is a strong diagnosis to place on someone so young.

Many clinicians are reluctant to place such a permanent diagnosis on young people but alas many young people do have a formal diagnosis. A label that will stick to them for life. If you’ve been reading my blog for a while you’ll know that I was recently diagnosed with anxiety and OCD, if you haven’t well now you know! I’m always going to have these disorders. They are part of me, but they do not make up my identity as such. They aren’t a positive label to have. Being labelled with a mental health problem isn’t good at all. But we can use it to our advantage. Something not many people see.

I know that I’ve been experiencing my current symptoms since the age of 14, but I never thought anything of it. I used to collect bottle tops, worry if I lost something to the point where I’d have a panic attack and so much more. I had low confidence too. I thought this was normal. I thought I had Asperger’s Syndrome at one point after researching, but ignored it, mainly because of the stigma attached to learning difficulties.

I never let the stuff that was going on in my head show. At least I tried not to. It was difficult but I made it through until I was triggered by an event in college which made things spiral. This is when the stigma hit me head on. I felt judged from that point onwards at the age of 19. Stigma from everywhere I turned. That’s why I didn’t get a formal diagnosis till now.

Concerned parents take their children to the doctors and they get a mental health diagnosis. Some doctors take the chance and wait until the child is older. Young people have more agency in this decision. They can decide whether to approach the health sector. They can’t easily be forced unless they are compelled to do so by the Mental Health Act. Yet no one has a choice whether stigma hits them. At all.

Stigma is all around us. We have seen it in the media recently. There is a real lack of understanding around mental health problems. People think that OCD is just about wanting to clean or having things in order. There are different types of OCD. There are different types of anxiety, different types of depression. Mental health problems affect us in different ways and people don’t see that. We are placed into a strict box that I personally find it hard to get out of. I don’t have a problem with cleaning, in fact I probably have one of the messiest rooms ever! I don’t just worry about everything. I worry about specific things. People don’t understand.

I feel lucky that I’ve been able to do some things in life before my formal diagnosis. I had the choice. My anxiety and OCD has just been placed on my record. I chose to have it on there. Children don’t have that option unless they are deemed able to understand the consequences. The consequences of what is going on in their mind. I’ve been able to hold down jobs, been able to go to college and start university.

I also want to point out the fact that being diagnosed with a mental health problem or problems is not a sign of weakness. It shows that you have strength to recognise your feelings and have been able to recognise that the thoughts or symptoms are not “normal” for you. Everyone has a different normal, remember that. It is only society that places the line between normal and abnormal.
Posted by Lisa Bortolotti at 14:27