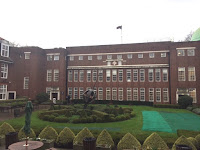 On 4th and 5th February project PERFECT hosted their first major event, PERFECT 2016, a two day workshop on False but Useful Beliefs. The workshop was held in the Herringham Hall at Regent’s Conferences and Events (pictured above) in London. In this post I give a brief overview of the ten papers presented at the workshop.

Anandi Hattiangadi (Stockholm), pictured above, opened the workshop with a paper entitled: ‘Radical Interpretation and Implicit Cognition’. Anandi considered the prospects for the possibility of Lewisian radical interpretation which requires an entailment from the physical truths about some subject to intentional truths about her. In light of recent work in experimental psychology, in particular, work on heuristics which lead to irrational actions from the point of view of decision theory, she concluded that radical interpretation is impossible. In discussion time, there was an opportunity for Anandi to clarify the nature of intentional realism, and to explain whether all forms of irrationality are criticisable.

Next was Lubomira Radoilska (Kent) who asked whether false and epistemically unwarranted beliefs can be non-accidentally conducive to agential success. Lubomira was interested in beliefs which contribute to the overall success of an agent (for example, unrealistic optimism about one's prospect of success). She argued that such beliefs are not conducive to success in virtue of their falsity, but in virtue of their being practical, that is, of their self-fulfilling dimension. In her Q&A, Lubomira was asked whether her view could account for degrees of credence and was asked to consider different cases of false and unwarranted beliefs that are conducive to success.

Jesse Summers (Duke) outlined the advantages of some ways of rationalising our decisions or actions in his paper ‘Post Hoc Ergo Propter Hoc: Some Benefits of Rationalization’. He had as the background for the talk Robert Audi’s view on rationalization, and discussed its costs and benefits in some detail: rationalisation can interfere with praise and blame, and with self-understanding, but it answers a need for consistency and meaningfulness. When it came to Jesse's discussion time, he was asked to defend his definition of rationalisation, and was asked whether there are better explanations available to the agent who rationalises.

Leading nicely on from Jesse’s paper, the first of three speakers from project PERFECT was Lisa Bortolotti (Birmingham), pictured above, with her paper ‘The Epistemic Innocence of Self-enhancing beliefs’. Lisa’s focus was on systematic tendencies to form excessively positive beliefs about oneself. Lisa characterised the epistemic contribution of self-enhancing beliefs in terms of their supporting epistemic functionality. She appealed to the notion of epistemic innocence to tell a richer story about the psychological and epistemic costs and benefits of positive illusions. Lisa was pressed on whether there is only a correlation or a causal relation between positive illusions and subjective wellbeing, and whether different accounts of epistemic normatively can endorse epistemic innocence.

Opening day two of the workshop was Neil Van Leeuwen (Georgia State/Antwerp), pictured above, with his paper ‘Props in the Clouds: On The Role of Agent-like Stimuli in Religious Practice’. Neil considered the Agency Indicator Based Belief view of religious cognition, which holds that humans are set up to be sensitive to the presence of agents, and people with religious cognition are hypersensitive, resulting in belief in supernatural entities. He raised three objections to this approach and argued for his preferred view according to which agent-like stimuli plays a prop-like role in a game of make-believe (as described by Kendall Walton, 1990). In Q&A, Neil was asked about whether some religious attitudes can be regarded as doxastic states, and clarified in what situations people tend of interpret their experience as evidence for the existence of god.

Next up was our final talk from the project team: Kathy Puddifoot (Birmingham) on ‘The Illusory Nature of the Ethical/Epistemic Dilemma over Stereotyping’. Kathy set up a dilemma raised by stereotyping: whilst moral considerations push in favour of treating people as equally likely to possess certain traits, epistemic considerations might incline us to reflect social inequities in our judgements of the likelihood of a given person possessing a given trait. She appealed to psychological research on stereotyping to argue that often the moral and epistemic perspectives give us the same advice: avoid stereotyping.

David Kovacs (Cornell) gave his talk ‘False but Useful Beliefs about Ordinary Objects’. He assumed at the outset that our common-sense beliefs about ordinary objects are false, and as a proponent of a revisionary ontology, took himself to bear the burden of explaining why many people hold beliefs which are incompatible with such an ontology. His so-called ‘unapologetic solution’ involved an evolutionary account of our false ontological beliefs, and the assigning of a positive epistemic status to these beliefs even though they are false.

The penultimate talk of the workshop was given by Kate Nolfi (Vermont) with her paper ‘Epistemically Faultless False Beliefs’. She began from the idea that false beliefs, just in virtue of their falsity, necessarily fall short, since there is a substantive normative relationship which holds between belief and truth. She argued for an alternative view according to which what it takes for some mental attitude to be a belief is its having a specific action-enabling job. This view had the consequence that falsity does not always entail an epistemic imperfection.

Closing the workshop was David Papineau (King’s College London), pictured above, who asked whether functional falsity refutes teleosemantics. For the teleosemanticist the biological function of representations is to guide behavior, and the truth conditions of representational states are given in terms of what those states are supposed to do. Cases of functional falsity present a problem for teleosemantics, since beliefs are functioning as they should by being false. David argued that though such cases are ones in which the resulting beliefs have a non-truth tracking function (e.g. encouraging fearlessness), they also nevertheless retain the function of tracking truth. He argued that the system which generates these false but useful beliefs does not fall under the remit of the teleosemantics programme.

We think the workshop was a very productive one, and we again thank all of our speakers and delegates for participating in the event and contributing such interesting talks and stimulating questions in discussion time.