On 14th November there was an interesting conference at the Royal Society of Medicine on the effects of social media on mental health.

Mary Aiken (University of College Dublin) discussed the Cyber Effect, her book which addresses the risks of social media on young people (cover below). Cyber space is a space and we need to consider the impact of it on vulnerable populations such as teens. We need to factor in developmental aspects (at what age should parents let children have a smartphone?). We need to recognise the continuous evolution of behaviour and as experts we need to drive policy initiatives and develop guidelines for parents and educators. 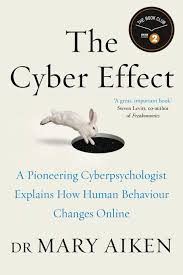 Jon Goldin (Great Ormond Street Hospital) talked about the risks and benefits of social media for young people. Children like using social media for different reasons: they use it for communication, to express themselves, to gain confidence, for popularity, for entertainment, to develop a sense of belonging, to receive information. Social media is risky for adolescents: it may cause a lack of sleep; due to anonymity, it encourages bad behaviour such as cyberbullying; it may facilitate gambling; and it can be used to research suicide methodology. 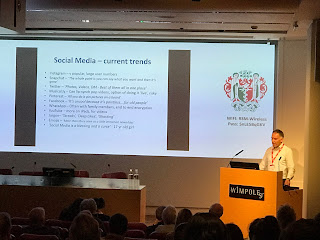 The worrying data suggest a correlation between social media use and mental health issues. There can be advantages to the use of social media such as ready availability of information, but the reasons to worry are greater than the reasons to be optimistic unless measures are taken to regulate the use of social media. One worry concerns anorexia nervosa: whereas some sources offer support there are sites inviting people to be anorexic and offering tips to avoid food. Another worry concerns child protection such as preventing grooming and sexting.

The next talk was about support for gender dysphoria, and was presented by Jan Sampson from the organisation called Mermaids UK (logo below). Jan talked about the stories of Jackie, a trans girl who was severely abused in high school and made seven suicide attempts. Jan was very clear that social media can be positive and negative: positives include allowing people to get support and information, negatives include the fact that online abuse makes it the case that there is no safe space for the person who is the victim of abuse. 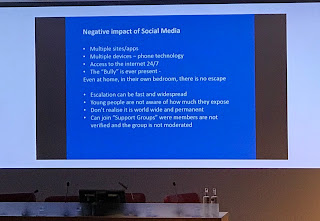 The next two talks were about grooming. Heather Carr (picture below) from Child Exploitation and Online Protection described the process offenders and children go through when they come into contact. The first stage of grooming is to gain trust and friendship trying to find areas of common interest and showing empathy. Then the offender will conduct a risk assessment, checking who is around the child. The following step is to ask the child to share things and once the child shares content, the offender will blackmail the child. "If you tell someone, or if you don't do what I tell you, then I will share those embarrassing  images of yourself". 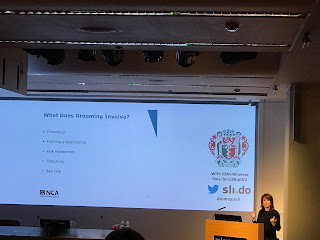 Young people may want to be liked and understood and may have a natural sexual curiosity. So they are especially vulnerable to offenders who flatter, send gifts, and help them online by giving them tips on a gaming platform or "likes" to their online content. The impact of online sexual abuse is very significant: it causes shame, guilt, fear, anxiety, mistrust; it makes children feel deceived, engage in self-harm; and may also turn into later relationship difficulties.

Simone Benhayon (picture below) from All Rise Say No to Cyber Abuse shared her own experience of being abused online as a teenager and as an adult. She wanted to know more about the phenomenon and she discovered that online abuse is not confined to young people but can affect anybody. She argued that abuse is abuse, whether online or offline, and that it is not the medium that is responsible for the harm done, but it is the people who abuse. Of course social media can be part of the problem, but the need is to educate adults to interact with each other differently. The key is not to take away social media from children but to show them how to relate to social media and to treat each other with decency and respect. 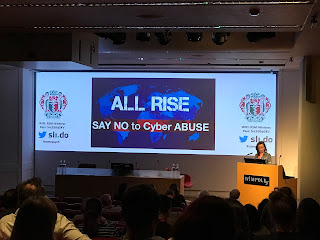