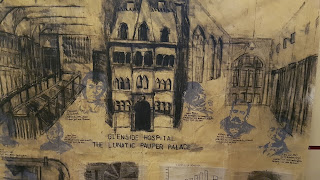 There’s a lovely little church in Blackberry Hill, Bristol, nestled in the grounds of what was once the old psychiatric hospital. Step inside, and you’ll find a curious assemblage of artefacts, writings, recordings, drawings, and sculptures, telling the stories of the many mental health patients and practitioners of Bristol’s past. Welcome to Glenside Hospital Museum, which I’ll tell you a bit about now, before encouraging you to take a look for yourself if you’re ever over that way. (In terms of the content, I do discuss patient accounts of treatments, some that are quite upsetting.) 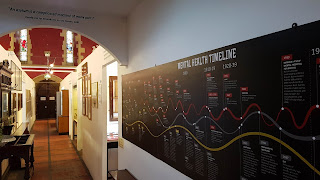 At the start of the exhibition, we see the shift from dominant attitudes in 1600s Britain of seeing mental illness and distress as a punishment from the Christian god, or a mark of demonic possession, to the idea that the afflicted are sufferers for whom there might be a cure, and the birth of modern psychiatry as a medical field in the 1800s. You can peruse a detailed timeline developed by the museum’s volunteer researchers, chronicling treatments, philosophical theories of mental health, significant public events, and the attitudes of those in power across the ages. 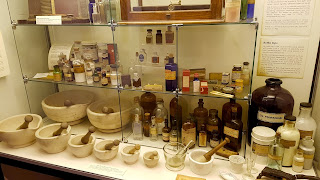 The museum has quite an array of historical artefacts: anatomical models for teaching, such as the brain of wound cotton; old medicine bottles and records of treatment advice (for instance, for preventing a faint, you would once have been advised to imbibe a ‘tot’ of brandy – this author does not endorse this advice, not least because I am rather uncertain as to how many millimetres are in a ‘tot’… is it at the patient’s discretion?); early ECC scanners and ECT machines, as well as something called a ‘violet ray’, a device used to administer high frequency, low current blasts of electricity to the body, which was used in effort to relieve various symptoms of mental disquiet as well as physical ailments such as asthma…though it’s not clear that it was very successful… 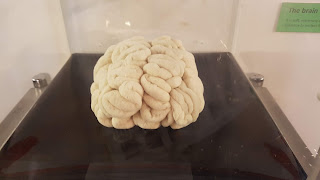 I was particularly moved by the emphasis on the experiences of the individuals involved in the hospital over the years. I listened to a clip from a sound archive in which Mary Cox, a medical secretary in the 1970s, had no choice but to take her sick dog to work one day – the patients so enjoyed petting and spending time with the dog (which he enjoyed as well!) that he became a regular visitor.

In an excerpt from the museum’s oral archive, Clive tells his story about undergoing a leucotomy (also known as a lobotomy, a barbaric procedure in which parts of the brain are physically destroyed) in the 1960s: “It was a horrible time for me because I couldn’t do anything after that operation. I had to learn how to do things all over again and I was ill for a long time.” Clive discussed how he didn’t blame his parents, who signed off on the procedure, as well as how he wished to meet others who had had the same operation to try to reach a better understanding of his experiences. We don’t know if that wish was ever granted. 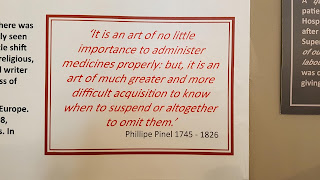 I particularly enjoyed the exhibition of drawings by Denis Reed, former artist, lecturer, and patient of Bristol Mental Hospital in the 1950s. His sketches show a series of lively interactions, the savouring of cigarettes – an important currency for patients, as well as the listlessness of other aspects of life on the men’s ward. 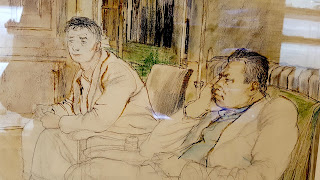 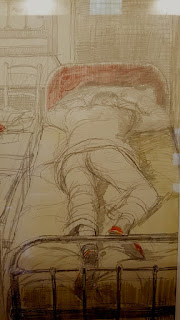 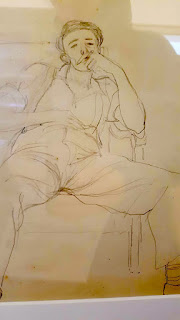 Currently, you can also see “We Had Names: patients of The Bristol Lunatic Asylum” an exhibition by contemporary artist Anwyl Cooper-Willis. Among my favourite pieces was the wall of sketches of individuals, based on 1890s admission photographs, and drawn on ECG paper. 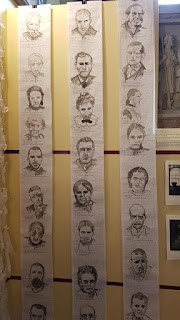 Glenside Hospital Museum is free to visit (a £2 donation is suggested), has full disabled access, and is open at 10am – 12:30pm on Wednesdays and Saturdays. You can find more access info here.