The Mismeasure of the Self

Today's post is by Alessandra Tanesini (University of Cardiff) and it is a presentation of Tanesini's latest book, The Mismeasure of the Self: A Study in Vice Epistemology (Oxford University Press 2021). 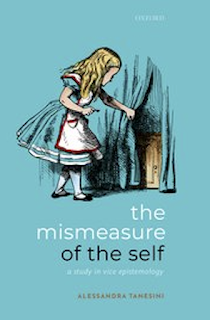 The book is dedicated to the study of eight epistemic vices: four vices of superiority and four of inferiority. The vices of superiority are characteristic of people who feel superior, entitled, and have an inflated opinion of themselves. Those of inferiority are typical of individuals who feel inferior, undeserving and are full of self-doubt.
The book focuses on superbia, arrogance, vanity and narcissism as examples of vices of superiority, and on servility, self-abasement, timidity and fatalism as illustrations of those of inferiority. Each of these vices is shown to be rooted in faulty self-evaluations. People who suffer from these vices do not have the measure of their own strengths and limitations. Because their self-assessments are motivated by needs that are at variance with the desire to be accurate, they result in evaluations that are disconnected from reality.

The philosophical analyses of these vices developed in the book are informed by findings in the social psychology of attitudes. Virtue theorists have usually looked at personality psychology and especially at theories of the so-called cognitive-affective personality system to individuate the empirical bases of virtuous (and vicious) dispositions. In the book I take a different approach to argue that the epistemic vices with which I am concerned are underpinned by what psychologists call ‘attitudes’.
An attitude is a summary evaluation of an object; it consists in associations of varying strengths between one or more positive or negative valences and a representation of the object of the attitude. Hence, for example, superbia of the intellect comprises a bundle of dispositions that are based on clusters of attitudes that are summary evaluations of aspects of the self, such as mathematical ability, reasoning prowess, and so forth. These attitudes, however, are not motivated by the need to know the self, but by the desire to self-enhance. Hence, the person who suffers from superbia fails to have the measure of their true abilities.

Having developed accounts of each of the eight vices listed above, the book offers a detailed examination of their negative epistemic and moral consequences. It shows that these vices cause numerous harms to their possessors, to other epistemic agents, and to epistemic communities as a whole. Given the impact of epistemic vices on the lives of individuals and on the functioning of the societies to which they belong, ameliorative interventions are of paramount importance.
In order to develop a positive proposal for improvement, the book first argues that individuals are responsible for their vices only in some limited sense. Since these vices are aspects of their character, they are attributable to those who have them who are, therefore, rightly disesteemed. However, people are not answerable for their vices since these impair their judgment. Nevertheless, since vices reflect the poor quality of individuals’ concerns, it can be appropriate to hold people accountable for their vices.

That said, although individuals are blameworthy for their vices, others often lack the required standing to blame them. In addition, there are reasons to believe that blaming people for their vices is often counterproductive. Instead, the book proposes that value affirmation techniques, also developed in social psychology, can be efficacious in ameliorating vicious dispositions. These techniques are instrumental to rendering individuals’ self-esteem more secure and to reduce the defensiveness and the tendencies to excessive self-doubt characteristic of many of the vices of superiority and inferiority discussed in the book.
Posted by Lisa Bortolotti at 08:00