The Moral Roots of Quarantine: Interview with Nevia Dolcini

Nevia Dolcini: The outbreak of COVID-19 pandemic prompted a series of unprecedented events worldwide. As an Italian living in Macau, I first witnessed the effects of the Wuhan outbreak, and I later experienced the first wave and consequent lockdown in Italy. I was bewildered by my observations of the wide-ranging public reactions to the same emergency.

For instance, while masks in Macau were accepted since the first day into the pandemic, in Italy their efficacy was questioned at length. Interestingly, the pandemic discourses across East and West were highly ‘moralized’. These observations inspired the project “The Moral Roots of Quarantine”, funded by the Macau S.A.R. Government Higher Education Fund, which sets out to carry on a comparative investigation of the measures taken by legislators in different countries and the moral justifications provided in their support, as well as the role of shared moral beliefs in shaping the public responses.

LB: So, one of the objectives of the project was to compare various aspects of the quarantine measures imposed during the pandemic in different countries. Can you offer an example of the differences you observed?

ND: In the first phase, while in Europe the compliance with the mandated anti-pandemic measures was monitored in traditional ways (e.g., roadblocks and checkpoints), China combined more traditional with innovative measures, such as contact-tracing apps. A stark difference was noticeable in terms of the community response: the call to download contact tracing apps was coldly received in many Western countries under the concern of potential threats to personal privacy, yet they were more positively accepted in China, where these apps were regarded as a tool for protecting families and the community.

LB: What were the main findings of the project?

ND: We found that the global status of an emergency might not be sufficient to justify a homogeneous response to it. The effectiveness of a measure depends on multiple factors, including the socio-cultural context in which it is implemented as well as the communicative strategies employed. The latter aspect has been given special attention in our work: the effectiveness of the anti-pandemic public discourse depends greatly on the capacity of the public communication to leverage on the community-wide accepted ‘moral outlook’ (e.g., the case of the contact-tracing apps).

Interestingly, we also found that the communication of extraordinarily restrictive measures has often exploited stereotypes and common views that are potentially hurtful to specific groups of the population, in particular women, health-workers, and immigrants.

LB: What impact do you expect the project to have on current and future responses to health threats such as COVID-19?

ND: While it is beyond the scope of this project to assess the scientific value and efficacy of the responses to the pandemic, our aim is to highlight the contribution that the humanities and the social sciences can bring to the table in times of crisis. With this aim in mind, in December 2021, we held an interdisciplinary conference participated by researchers from various countries.

One thing that has emerged is that, for instance, the same preventive measure, e.g., lockdowns as the extreme form of social distancing, while generally backed up by scientific research, have had different outcomes depending on the social, geo-demographic, and cultural context in which they have been enforced. As argued by Alex Broadbent, while lockdowns may be effective in rich countries, they have shown to offer no protection to people living in circumstances in which the risk posed by COVID 19 is lower than other threats to life, so that lockdowns have in fact increased those other risks. This is only one of the many examples of the contribution that non-medical disciplines could bring to the table. 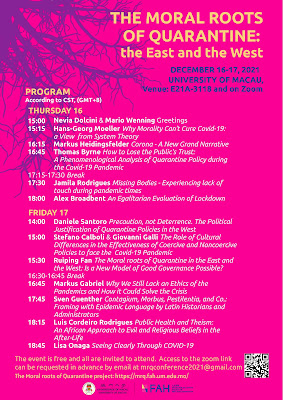 LB: As part of the project, you created an interdisciplinary network of researchers worldwide. What were the disciplines involved and why was this range of expertise needed?

ND: Beside various branches of philosophy, other disciplines include anthropology, the cognitive sciences, economics, political theory, communication studies, and history. While the study of general cognitive tendencies is a fundamental tool to understand (and possibly predict) the public reaction to given measures, a more comprehensive study of a population – contextualized in its socio-cultural background – may help to shape the public discourse more effectively, and therefore to enhance the chances for a successful intervention.
Posted by Lisa Bortolotti at 08:00