Remembering from the outside?

Currently I am a PhD student under the supervision of John Sutton at the ARC Centre of Excellence in Cognition and its Disorders, Macquarie University.

One of John’s research projects, and the topic of my PhD, is a philosophical investigation of visual perspective in autobiographical memory, and we recently gave a talk on this subject at the Philosophy of Memory Workshop in Adelaide.


When remembering past experiences, one can remember the event from one’s original point of view, maintaining the same visual perspective on the scene with which one experienced the event. Many people, however, report sometimes seeing themselves in the remembered scene, from an external or third-person perspective. Following Nigro and Neisser’s seminal paper these are known within psychology as memories from field and observer perspectives respectively.
Despite a burgeoning number of empirical investigations within cognitive psychology on the topic of visual perspective in memory (see, for example, Rice and Rubin 2009), some philosophers make no room for observer perspectives within their accounts of memory, and others explicitly deny that observer perspectives could be genuine memories. In our talk John and I explored some challenges to that view by looking at how a number of philosophers treat, or fail to treat, the observer perspective.

We argued further that at the heart of many of the instances in which observer perspectives are denied or neglected lies an overly preservationist conception of memory. Such a conception holds that memory must preserve the same content as the original perceptual experience, such that the visual content of the present memory must be precisely the same as the content of the past perception. We argued instead that autobiographical memory is a constructive process in which perspective is malleable, and open to the context of retrieval. 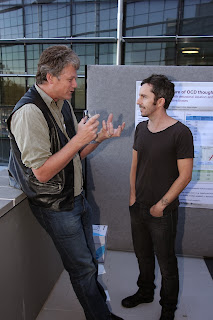 It is important to note, nonetheless, that such construction and malleability in autobiographical remembering does not necessarily entail inaccuracy or invention. We argued that even though memory is constructive, the relation between the present memory and the past experience must involve, firstly, sufficient similarity of content, and secondly, appropriate causal connections. We hold that observer perspectives can meet these criteria. Memories can be constructed, worked over, and infused with what one now knows, thinks, or feels, for example, but this is true just as much for the field perspective as the observer perspective.

John and I received many helpful and insightful questions and comments on the talk, leaving us with plenty to ponder for future work on visual perspective in memory, and we would like to thank all those involved in the workshop, especially Jordi Fernandez and Suzy Bliss.
Posted by Christopher McCarroll at 06:00

Email ThisBlogThis!Share to TwitterShare to FacebookShare to Pinterest
Labels: memory, perspective, self