Report on the 2015 University of Sydney Winter School

Caitrin Donovan and Reinier Schuur report from the 2015 University of Sydney Winter School. The programme was entitled "Cross-cultural psychological differences and their philosophical implications" and seminars were led by Stephen Stich (Rutgers) and Dominic Murphy (University of Sydney). 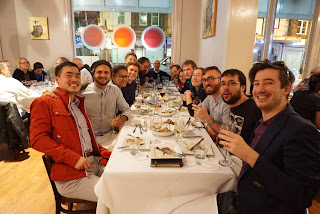 From the 19th till the 23rd of October the unit for History and Philosophy of Science at the University of Sydney held its second winter school programme, this year on the topic of “Cross-cultural psychological differences and their philosophical implications”.

Intuitions have been long been the bread and butter of various philosophical projects, which use them to evaluate semantic, epistemic, ethical and ontological theories and concepts. This can be seen in ‘Gettier cases’ in epistemology where accounts of knowledge are tested against intuitions on what counts as knowledge, and in ‘trolley cases’ in ethics where what is morally justified action is tested by our intuitions of such actions. Appeal to intuitions might indicate an older tradition in philosophy where intuition is a kind of perception that ‘intuits’ certain philosophical truths. Appeal to intuitions may also reflect the project of ‘conceptual analysis’ where the goal is to capture, via our intuitions, a common-sense notion of some philosophical concept like ‘knowledge’.

The assumption behind both these projects is that our intuitions are generally shared and stable enough to count as solid evidence. But what if this assumption is incorrect? This is what Stich argues in his experimental philosophy work, where he shows that there are differences in epistemic and moral intuitions across various cultures and demographics. If such findings are verified, they could have serious implications for our appeal to intuitions as evidence in traditional philosophical projects and conceptual analysis as a methodology. It is worth asking what effect Stich’s intuition-scepticism has on the debate over the nature of mental disorder, where intuitions are often invoked as a priori constraints in determining what should count as a mental disorder.

In addition to intuition-scepticism, we also considered the extent to which empirical research challenges widely held assumptions concerning the universality of psychological processes. Though subjects taken from ‘WEIRD’ (Western Educated Industrial Rich Democratic) nations are frequently used (tacitly or otherwise) as a model for human nature, their representativeness is challengeable. Heinrich et al’s critical metastudy is a notable example of this. Interestingly, the authors present evidence suggesting that the Müller-Lyer illusion is not, as previously assumed, a universal phenomenon. If basic perceptual processes are not encapsulated, but sensitive to cultural influence, culture may have a more powerful and diversifying influence on our psychological make-up than is commonly assumed.

This was crystallised in the final two days of the workshop, when we considered the consequences of psychological diversity for psychiatry. For the purposes of the DSM, the medico-anthropological concept of a ‘culture-bound syndrome’ is used to capture psychiatric disorders that that do not neatly conform to the pre-established diagnostic schemas of Western psychiatry. It may be that some culture-bound disorders have been wrongly pathologised, and merely reflect various culturally idiosyncratic ways of dealing with distress. Perhaps, however, under the ‘noise’ of symptom variation, at least some culture-bound syndromes can be understood as diverse expressions of some underlying, culturally invariable mental disorder. It has been argued, for example, that the DSM’s characterisation of panic disorders should be widened to include Ataques de Nervios.

One way this latter, unificationist approach might proceed is by identifying culturally invariable neuropsychological processes that are common to both panic disorders and Ataque de Nervios. Of course, for this strategy to work, it must be the case that the relevant lower-level processes are not themselves subject to cultural construction and variation. As we have seen, however, there may be good reason not to simply assume this must the case. Murphy suggests that while unification is an epistemically respectable strategy, if culture runs deep we should be prepared for the possibility that there are genuinely culture-bound psychiatric disorders. Further, some disorders in Western countries may be just as culturally-bound as those non-Western diagnoses the DSM-V currently lists in their appendices.

The winter school offered us the opportunity to consider interesting empirical challenges to long-held assumptions of universality in philosophy and psychiatry. First, evidence of cross-cultural and demographic variation in ‘philosophical intuitions’ suggests they are far less widely shared than has been traditionally assumed in philosophical discourse. Second, evidence that culture has a more profound effect on human cognition problematises both the representativeness of WEIRD subjects and the cross-cultural applicability of diagnostic categories. The kinds of findings that were under discussion have the potential to reorient our attitudes towards conceptual analysis as a philosophical method, as well as the way in which we conceptualise and investigate the mind and its breakdowns. While these empirical issues are in many respects unsettled, an important take-home message of the Winter School was that their implications are substantial.