The Natural and the Human

This post is by Stephen Gaukroger, Emeritus Professor of History of Philosophy and History of Science at the University of Sydney. 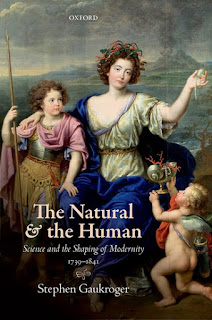 In the course of the eighteenth century, philosophers, physicians, political economists and others began to think about how the study of human behaviour might be taken out of the hands of metaphysicians and theologians, and transformed into an evidence-based scientific enterprise. These projects fall under the general rubric of ‘naturalization’.

The Natural and the Human looks at late eighteenth and early nineteenth century attempts to naturalize the study of human behaviour, and at the way in which this general programmes lead to the naturalization of religion.

Four forms of naturalization of the human are explored. The first is anthropological medicine, in which traditional philosophical understanding of the human condition is replaced with a medical understanding, not least on the grounds that whereas philosophy confines itself to healthy minds and bodies, what is needed is an understanding of the mind and the body in healthy and unhealthy states. In particular, healing the mind becomes, like healing the body, an empirical matter.


Whereas anthropological medicine was primarily a French phenomenon, the second project, philosophical anthropology, was German. From Christian Wolff onwards, there had been a subject called empirical psychology taught in the universities, but only as a prelude to a more philosophical form of psychology. Herder takes empirical psychology as valuable in its own right by concentrating on the development of language its source of empirical evidence about the nature of the mind. Here language was treated not as a mere expression of thought but constitutive of it, providing a window onto mental operations. The aesthetics of language was crucial in this exploration for Herder.

The third project was the natural history of man, in which human behaviour was understood, not in traditional absolute terms, but in comparative terms: comparative anatomy, comparative geography, comparative history. Just what light such studies threw on the nature of the human being was highly contested. The fourth project, social arithmetic, was an especially radical exercise. The development of consequentialism in Bentham involved the naturalization of morality, making the morality of behaviour subject to empirically discernible criteria. In a related development, everyday life began to be quantified, so that behaviour in general was now assessed not with regard to established virtues, but with regard to norms and averages.

The naturalization of religion was perhaps the most radical part of the naturalization programme, in that it required standing back from Christianity and treating it like any historical phenomenon. Not only was Christianity itself historicized (in Gibbon), but so too was Christian dogma (in Strauss), and various forms of religion were located within an evolutionary development that culminated in humanism (Feuerbach).

The Natural and the Human is the third in a series of what will be four volumes, in which the emergence of a scientific culture in the West is critically examined.