This post is by Rosa Ritunnano, consultant psychiatrist and doctoral candidate at the University of Birmingham, reporting from the 21st Annual Conference of the International Network for Philosophy and Psychiatry (INPP).

The event took place from 22nd-24th October 2019 at the University of Warsaw; it was organised by the Open Seminars in Philosophy and Psychiatry Foundation, with support of the Polish Phenomenological Association and the Phenomenology and Mental Health Network (Collaborating Centre for Values Based Practice, St. Catherine’s College, Oxford). A special thank you note goes to Marcin Moskalewicz (member of the organising committee) for sharing some of photos included in the post. 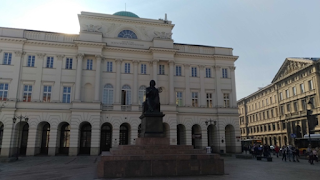 The INPP conference brought together researchers and professionals working at the interface between Philosophy and Mental Health from 32 countries and provided a lively forum to discuss developments and challenges for the next generation – particularly in relation to psychiatric expertise, methodological pluralism, and issues of values and ethics in mental health. This overarching theme provided a broad framework for other assorted topics cutting across cultures of healing, psychiatric models and “psy” disciplines (psychiatry, psychology, psychopathology, psychoanalysis, cognitive psychology, the philosophy of mind and the like). Keynote lectures, parallel sessions and workshops ran enthusiastically over three full on days and across beautiful historical locations in Warsaw such as the Staszic Palace (seat of the Polish Academy of Sciences), pictured above.

Due to the abundance of notable contributions which I cannot address comprehensively in this brief report, I have decided to focus on a few talks in the areas of phenomenology and psychopathology (very much overlapping with my current research interests). Here is a full list of speakers and abstracts.

In his keynote lecture “Everywhere and nowhere: reflections on phenomenology as impossible and indispensable (in psychology and psychiatry)”, Louis Sass offered some crucial reflections concerning the question of what phenomenology is intended to reveal. Louis addressed the concept of subjectivity as a focus of attention which is both indispensable and–from a certain perspective–impossible. It seems obvious, he argued, that the investigation of consciousness would lie at the heart of the “psy” disciplines as the most important of subjects. However, there is much about the study subjectivity that remains both enigmatic and obscure due to the complex ontological and epistemological nature of this domain. Granted, phenomenology needs to maintain a complex and self-critical attitude towards its own project, so how can we approach the investigation of subjective life?

To clarify this point, Sass discussed how subjectivity should not be approached and guarded against three specific forms of error: 1) prejudice and the failure to “bracket”, 2) problems associated with reflection, and 3) Heidegger’s “forgetting of the ontological difference”–which is arguably the most fundamental error. Following this via negativa, Sass took us through a powerful intellectual journey through the well-know tradition of phenomenology (Husserl, Heidegger, Merleau-Ponty) and offered a critique of logical positivism, reductionist physicalism and other strands of analytic philosophy that might conceive of phenomenology as some kind of ill-defined mysticism, superficial introspectionism or naïve foundationalism.

Among others, Giovanni Stanghellini offered precious insights into the nature of the phenomenological endeavour and described it akin to a “dance around the heart of being”, an “infinite approximation to phenomena” (where what really counts is the very art of approximation). It could be also assimilated to architecture, he said (quoting the Italian architect Filippo Brunelleschi), which is concerned with the art of “building columns in the void and turn emptiness into a quasi-liveable space”.

Brencio kicked the panel session off with a talk entitled “How do you feel? Disruption of moods and feelings in affective states”, during which she provided the philosophical framework for a truly interdisciplinary discussion of affective psychopathology. Brencio turned to Martin Heidegger’s analysis of Dasein and his pivotal conception of “disposition” (Befindlichkeit) to develop an understanding of the constitutive role of moods in the context of human existence. Moods, she argued, are the means of access to the world as we understand it and signify it; they cannot be confused with emotions or feelings.

Feelings (which are always connected to our lived body) are the key structures of one’s affective life and the basis for intersubjective attunement and intercorporeality. Psychopathological features of affective disorders can thus be understood as originating from a disruption in moods or feelings, through a transformation of the pathic dimension of human existence. This has significant implications for practitioners, who should be aware of the impact of affectivity on meaning-making processes within the clinical encounter.

Moving on to interaffectivity, Iubei’s talk “Expanded bodies. Atmospheres as collective spaces of affective intentionality”, focused on the phenomenological role of atmospheres as “spatialised feelings”. Atmospheres, she argued, are the “in-between” phenomenon for excellence; they create an emotional space where bodily feelings and environmental features merge into an open and constantly evolving intersubjective landscape. Atmospheric disruptions, occurring for example in the context of schizophrenia, reveal that something has happened in this space in-between, where an “abyss” seems to open up and segregate the subject from the familiar world of everyday life. Iubei's doctoral research aims to enrich the phenomenological-existential approach to psychiatric disorders by drawing attention to atmospheres of living as potential therapeutic targets for patients with psychiatric disorders.

Bizzari closed the panel session with a talk entitled “Atmospheric Corporeal Interactions in Schizophrenia”. She argued that most important core disturbance of schizophrenia lies in the inter-corporeal self, and arises already during the atmospheric phase, when the self is not only embodied, but also already involved in the constitution of the social realm. Bizzari briefly addressed the role of disembodiment in the development of schizophrenia and then went on to argue that embodiment is present both in personal and interpersonal atmospheres.

To support her claim, she offered an analysis of first-person reports from the book Autobiography of a Schizophrenic Girl by M. Sechehaye (1962), which powerfully describe Renee’s struggle against unreality during the onset of illness. She concluded by arguing that a deficit in the intercorporal self–which is already present in the atmospheric stage–also hinders the development of higher social levels, such as collective emotions.

The conference ended with a closing session: “What are experts for?” involving all keynote speakers, followed by a unique performance of Polish singer, composer and multi-instrumentalist Kasia Tercz.