Knowledge from a Human Point of View

This post is by Michela Massimi who tells us about a collection she co-edited with Ana-Maria Cretu, Knowledge from a Human Point of View (Springer Synthese Library), available fully open access, courtesy of the European Research Council OA policy. 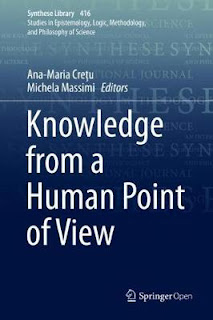 Knowledge from a Human Point of View is the second edited volume planned for the ERC Consolidator Grant "Perspectival Realism. Science, Knowledge and Truth from a Human Vantage Point" and in my original intentions it was meant to explore the historical roots and epistemological ramifications of the view known as ‘perspectivism’.

Better known these days among philosophers of science working on scientific modelling and pluralism (albeit not exclusively), perspectivism is a view with a long history. What is at stake in the prima facie platitude that our knowledge is always from a human point of view? Whose else’s point of view if not ours, one might immediately retort? Historically, the shift from knowledge sub specie aeternitatis (think of Plato’s theory of knowledge qua knowledge of eternal and immutable forms, just as an example) to knowledge from a human point of view marks a watershed. When is it that we started caring about the conditions that make us—finite human beings—capable of knowledge?

The first half of this edited collection surveys some of the salient historical moments (with no expectation or presumption of offering a complete treatment, of course) that marked this watershed: Zuckert’s chapter on Kant, Hales’s discussion of Nietzsche, Brown’s analysis of the American Pragmatist tradition and De Caro’s of Putnam. In their diversity of philosophical concerns and goals, these chapters remind us of how perspectivism does not lend itself easily to a single unifying definition. Historically very different figures appealed to views that can be called ‘perspectival’ for a variety of reasons—e.g., as a way of marking the boundaries of metaphysics, or of stressing the situated nature of our human knowledge.

The second half of the edited collection looks at the legacy of perspectivism for contemporary debates in epistemology. And here too perspectivism is a fruitful umbrella for a number of cognate philosophical positions. Khalifa and Millson explore how perspectivism relates to inquisitive truth monism as a more promising view than traditional true-belief monism. Ashton discusses the relation between Giere’s scientific perspectivism and feminist standpoint theory. Carter analyses Sosa’s virtue perspectivism and some of the challenges raised against it by Fumerton, Reed and Stroud. Treanor discusses what he calls the perspectival challenge to a family of views in epistemic normativity that see truth as the aim of knowledge.

The book concludes with an essay by Barry Stroud that raises the following invitation to aspiring perspectivalists: “can we really understand what we most want to understand about the enterprise of human knowledge by thinking of those who investigate the world as exercising only the concepts needed for the less-committal epistemic attitudes and responses that perspectivism concentrates on, not a concept of knowledge that implies truth and so apparently resists perspectival treatment? This is a question I recommend to aspiring perspectivists. As I think I have found with philosophical scepticism, I think it promises, at the very least, a deeper understanding of the puzzles that confront us.” Barry sadly passed away before this book got published. We dedicate the book to his memory as a little token of gratitude for sharing with us some of the long journey ahead to better understand perspectivism, its promises and challenges.