Today’s post is by Ema Sullivan-Bissett, who is a Senior Lecturer in Philosophy at the University of Birmingham. Here she overviews her paper ‘Unimpaired Abduction to Alien Abduction: Lessons on Delusion Formation’, recently published in Philosophical Psychology. Last year, when millions of people had marked themselves as attending a storming of Area 51, Ema also wrote about her research for the Birmingham Perspective. 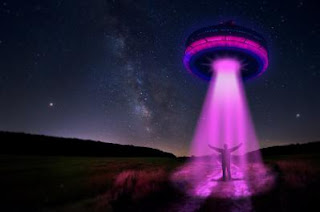 In the academic year 2013–14, I was a Postdoctoral Research Fellow on Lisa Bortolotti’s AHRC project on the Epistemic Innocence of Imperfect Cognitions. Towards the end of the Project, I was extremely fortunate to have the opportunity to be a Visiting Researcher at Macquarie University’s ARC Centre of Excellence in Cognition and Its Disorders.

Professor John Sutton hosted me for that month, but I was also lucky to spend some time with Professor Max Coltheart, and interviewed him for this blog. In the first part of the interview we talked about delusion formation, and in the second, we talked about alien abduction belief. I had thought a bit about this phenomenon prompted by some comments in Max’s paper ‘Delusional Belief’ (2011), and talking to Max about this really helped me get clear on what I wanted to say about it.

What resulted was my paper ‘Unimpaired Abduction to Alien Abduction: Lessons on Delusion Formation’, in which I argue that there is much to learn about this particular case of bizarre belief for what we should say about how monothematic delusions are formed, specifically, that the one-factor account ought to be the way we approach explaining monothematic delusion formation.


So what is alien abduction belief? Well, many people believe that they have been abducted by aliens. Often, they believe that particular events occurred as a part of this overall experience. For example, some abductees believe that they were taken aboard spaceships, subject to medical experimentation, formed sexual relationships and produced hybrid offspring with aliens, or received important information about the fate of the Earth. Clearly, this is a bizarre belief, but what does it have to do with monothematic delusions more generally?

To answer that question we need to summarise the state of play regarding the debate between one- and two-factor theorists of delusion formation. Psychologists and cognitive neuroscientists have argued that subjects with monothematic delusions have anomalous experiences in which these beliefs are rooted, but few (with the exception of Brendan Maher) take these strange experiences to be the only clinical factor. This is the one-factor approach.

The more popular view has it that there is a second clinical factor such as a cognitive deficit, bias, or performance error. This view is motivated—at least in part—by the fact that there are some subjects who have the anomalous experience associated with a delusion of a particular kind (e.g. the lack of affective response to faces typical of Capgras delusion), but do not themselves have the delusional belief (i.e. that their loved one has been replaced by an imposter). Two-factor theorists claim that a second factor is needed to explain why the anomalous experience prompts a delusional explanation in only some cases.

Alien abduction belief is interesting because theorists seeking to explain why people believe that they have been abducted by aliens have not sought to identify a cognitive abnormality, even whilst recognising that there are subjects who have experiences associated with alien abduction beliefs and who nevertheless do not believe that they were abducted by aliens. Rather, these researchers seek to identify a variety of normal-range cognitive processes that may contribute to the explanation of the generation of abduction beliefs. I argue that we have no reason to doubt the explanatory value of this research methodology, were we to equip ourselves with it, and turn to monothematic delusions more generally.

I conclude that the one-factor position ought to be the default approach for understanding delusion formation, and that those theorists interested in understanding the formation of delusional beliefs have much to learn from the case of alien abduction belief. To put it in the crudest terms, in the presence of anomalous experiences, it is normal for humans to have bizarre beliefs.
Posted by Lisa Bortolotti at 08:30