What Are Political Beliefs?

Today's post is by Jeroen de Ridder (Vrije Universiteit Amsterdam) and Michael Hannon (University of Nottingham). Their post is based on their chapter ‘The Point of Political Belief’ to appear in the Routledge Handbook of Political Epistemology (forthcoming in 2021), which they edited together. 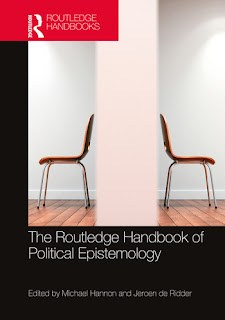 About a week after CNN and most other major news outlets had called the 2020 US election for Joe Biden, secretary of state Mike Pompeo stated in a press conference: “There will be a smooth transition to a second Trump administration.” This is just one example of a political belief that seems, shall we say, slightly out of touch with reality. There are others: one out of seven survey respondents agree with the statement “Barack Obama is the antichrist” and one out of seven Trump supporters maintain that the half-empty photo of Trump’s 2017 inauguration has more people than a photo of Obama’s packed 2009 inauguration.

Do people really believe these things, in the same way they believe, say, that their father was born in Amsterdam or that Earth has one moon? Do they really take these things to be accurate representations of what the world is like? Perhaps something else is going on.
Psychologists have established that people’s political beliefs are highly susceptible to motivated reasoning, identity-protective cognition, and confabulation (see Brennan 2016 for an overview). We process political information in ways that confirm our pre-existing beliefs, nurture and maintain our political identity, and bolster group loyalties—often at the expense of truth. Instead of accurately representing the world, our political beliefs often serve socially adaptive functions: they allow us to fit in, get us invited to barbecues, and bond with people ‘like us’.

If this is right, it can also account for why some political beliefs are so easily given up or even traded for contrary ones. Geoffrey Cohen’s (2003) work provides a striking example. He ran a study in which participants were told about two welfare programs: stingy and lavish. Both Democrats and Republicans supported whatever they were told their party supported. It made little difference what the actual content of the policy was.
Perhaps we can go even further. Maybe these crazy-sounding utterances and elusive convictions aren’t really beliefs at all. Maybe they’re more like the chanting of football fans or the Italian tailor-made suit of a city banker: they express a set of attitudes or a social identity, but don’t report what someone believes about the world. Saying that Obama is the antichrist or that more people attended Trump’s inauguration is simply partisan cheerleading, not an honest assertion in a political conversation.

Recent research in political behavior offers some empirical support for this idea. Bullock and colleagues (2015) found that partisans tend to give more accurate (less partisan) responses to politically charged questions when offered modest monetary incentives to answer correctly. If these survey responses reflected actual beliefs, then paying partisans to answer correctly should not affect their responses. Yet it does. This suggests that partisans will deliberately misreport their beliefs as a way to signal their allegiance to a particular ideological community. We should therefore be wary of taking factual claims about politically charged issues at face value, since they are often contaminated by the motivation to root for one’s team.
What’s the upshot? When thinking about political beliefs, we naturally assume that their function is to represent the world. But maybe that’s just wrong – for at least many political ‘beliefs’. They often appear to serve different functions: bolster group loyalty, protect identities, or receive psychological gratification. While it is easy to criticize people for making false claims or believing against the evidence, such criticisms may miss the point that for many voters, politics is not really about truth.