Mental illness is a choice, but who is the agent?

Today's post is by Dan Reardon who is currently an MSc student at the Institute for Mental Health, University of Birmingham. Dan is a medical doctor and an entrepreneur who has founded multiple fitness and nutrition companies, including venture capital funded FitnessGenes. He has been featured in InStyle, The New York Times, Men’s Fitness, Inc, Well+Good, Livestrong and on Fox News, ABC News, Inside Edition, Today, BBC News, and “The Doctors.” Dan has a keen interest in the demedicalization of young people, digital wellbeing and resilience.

I have a long-held belief that mental illness is far from something that is “real” in the disease sense, and yet the rate of growth of mental disorders, both the number of potential diagnoses (described by Foucault as being an invention of 19th century reformers), and the number of people suffering, is exponential. I’ve read countless accounts of mental illness being a choice of those that “suffer”, but I’ve realised the statement is wrong. The choice to have a mental illness does not solely reside, if at all, with the person seeking counsel, but with the professional that chooses to either reinforce their career decisions, or simply decide that there is an easy way to palm off the challenges of life of that person.
These choices are heavily reinforced if not lavishly coerced by drug companies, and within this “therapeutic domain” (Hazemeijer and Rasker, 2003), the normal individual having a challenging life becomes the patient with the diseases “anxiety and depression” (that have no biological basis), requiring medications (that don’t fix any identifiable disease) to feel a bit better about all of their life problems that remain exactly the same.
This is not to say, nor to undermine the suffering of the person seeking help, but the second these life challenges become medicalised rather than understood (Laing 1965), is the second that the sense of responsibility to deal with the problems is lost – and it becomes the responsibility of the state. But the state doesn’t fix these underlying challenges, it merely attempts to use poisons (pharmacology from the classic Greek pharmakon meaning 'poison') to make you feel a bit better about the problem or make someone else’s life a bit better/easier. 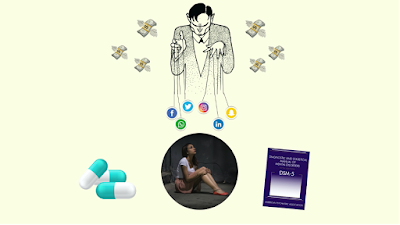 Let’s look at a stomach-churning example. In 2002 Miami Dolphins player Ricky Williams (adored by many people of all ages) made an appearance on the Oprah Winfrey Show declaring that he suffered with shyness. That sounds quite innocent given 40% of the Western world (in terms of natural temperament) is shy. But this was no ordinary declaration of shyness because Ricky was being paid by Glaxo-Smith-Klein (GSK) to go on the Oprah Winfrey show and declare his shyness.
In the months following he would become the poster boy of the new “Social Anxiety Disorder” drug called Paxil®/Seroxat® (Paroxetine). Shyness and introversion were now a bona fide pathology (according to the DSM), with a huge opportunity to get 40-50% of the population medicated using a technique called condition branding, and in 2003 alone, sales of Paroxetine globally reached just under $5B.
Alas as if the waters here are not already murky, let’s introduce the 2004 lawsuit by the New York State Attorney suing GSK for failing to disclose important safety and efficacy data about said drug. This all came to light because a memo from 1998 from inside GSK was leaked, telling employees to withhold clinical trial findings that showed the drugs had no beneficial effects in treating adolescents.
Introverted people know all too well the challenges that they face, not least because of how they are socialized with comments like, “he needs to come out of his shell” or “he needs to participate more”, so this insecurity creates a natural “que” to be receptive to a solution to the fabricated social challenges. If you can find a que, and you can build a drug, you will find your title of stigmatization in the DSM.

In her book Lean In, Sheryl Sandberg talks about how young boys on the playground that show leadership are described as “good leaders”, whereas young girls are described as “being bossy”. This is perhaps one of the many reasons why we often lack females in leadership roles, but it’s an example of the effects of stigma and how it can make outcomes in life inevitable. It’s bad enough that we had previously stigmatised shy children, but we now give them a medical diagnosis of social anxiety disorder, autism, or attention deficit disorder, with the perfect medications to fix this.

In conclusion it is my opinion that the fate of people’s mental wellbeing seems to be in the hands of mental health/healthcare practitioners, incentivized to declare a mental illness, and not to make the now contrarian statement that “your health is fine, but you need some support managing your life”, which would not be best managed by the medical profession.
Posted by Lisa Bortolotti at 08:00