A Variety of Causes

In today's post Paul Noordhof presents his book, A Variety of Causes (OUP 2020). 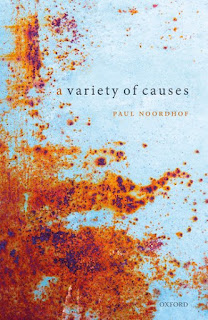 A Variety of Causes began life as an attempt to defend a counterfactual theory of causation that covered cases of indeterminism. Its basic tools were counterfactuals like ‘if e1 were not to occur, e2 would not occur’ (where e1 and e2 are token events) and appeals to probability in the consequent of the counterfactual (so p(e2) rather than e2) to characterise a notion of chance-raising. A successful defence requires a treatment of counterfactuals, identifying the conditions under which they are true and, for the enthusiast, that means I developed further Lewis’s similarity weighting for counterfactuals placing restrictions on the requirement for perfect match and clarifying the approximate match condition.
More complex counterfactuals were needed to deal with cases of ‘redundant’ causation, like the situation in which one cause pre-empts another candidate cause. The book defends a particular way of doing this involving non-actual situations in which the competing cause is not present together with an analysis of when a causal process is complete and a developed notion of chance-raising. One consequence that falls out of the treatment is that causation is not transitive. But all of this somewhat technical stuff became at the service of something more.
At its most basic, the analysis characterises causes to be something that, independent of their competitors raises the chance of their effect, over its mean background chance, by a complete causal chain. That is not to deny that causes come in many varieties. Some involve transmission of energy; some enable an effect to be produced while others trigger the effect; and some prevent other events from preventing the effect. Nevertheless, in contrast to other approaches, this variety of causes requires no recognition of fundamentally different kinds of causation, given different analyses. The only distinct kinds of causation the book recognises are cases of particular causation which, I argue, is fundamentally between events, and property causation which is distinguished from causation holding between properties in virtue of laws.
The varieties of causation that the book recognises did not stop there. The proposed analysis is neutral between various metaphysical frameworks: those which deny necessary connections between distinct existences such as the Humean approach and those which often assert them like the powers ontology. The orthodoxy (most famously propounded by David Lewis) is to take a successful counterfactual analysis of causation to support Humean approaches because the analysis demonstrates that appeal to necessary connections between distinct existences is not required for causation.
By contrast, I argue that necessary connections between distinct existences are coherent and our experience may supply evidence of their existence, which is sometimes dismissed because our experience misrepresents them. On the other hand, anti-Humeans make the mistake of presuming that their appetite for a full-blooded metaphysics appealing to necessities represents a necessary condition for causation. There are legitimate grounds for recognising causation in Humean worlds (in which there are no necessary connections between distinct existences of the required kind). Indeed, I argue that it is more plausible to allow causation in Humean worlds than phenomenal consciousness in physical worlds. Good physicalists should not reject the possibility of causation in such worlds.
My neutrality is not a misguided attempt to win friends by alienating both camps. There was another aim. The analysis shows that causation is not fundamental in one sense. The truth of causal statements depends upon facts about chance, the pattern these facts display, and what is required for a causal process to be complete. Call this the vertical sense of fundamentality. However, causation is a common structure of dependences realised in different metaphysical frameworks in different possible worlds. It is plausible that it is a required feature of any world. Call this the horizontal sense of fundamentality. The diverse ways in which causation may be realised allows for possibilities that a Humean metaphysics cannot accommodate without implying that causation cannot be present in Humean worlds.
The different ways in which causation may be realised also imply different bases for causal non-symmetry (rather than asymmetry). Some of these different bases provide an objective foundation for causal non-symmetry but another draws on a non-symmetry of agency. Causation may have a human ‘interventionist’ face but this is not essential to it and does not support rejection of causation from science, by those suspicious of such an everyday metaphysical notion cropping up there. The extent to which causation is connected to agency does nothing to impugn the fact that it is a horizontally fundamental feature of reality.
Posted by Lisa Bortolotti at 08:00