Philosophy of Psychology: An Introduction

Our (Kengo Miyazono and Lisa Bortolotti's) new Philosophy of Psychology textbook is out! Today it is the worldwide publication date for the book but in the UK it has been available since 14th May.
If you want to participate in the book launch, please visit this page and enjoy two conversations on the themes of the book, one with Nevia Dolcini and Jules Holroyd on rationality, self-knowledge, and implicit bias; and one with Katrina Sifferd and Pablo López-Silva on autism, psychopathy, delusion, and confabulation.
In the book, we defend a particular view of human cognition and agency as imperfect. In this post, we say a little more about the sense in which human agents fail to meet ideal standards of cognition and agency, such as criteria for rationality and self-knowledge. 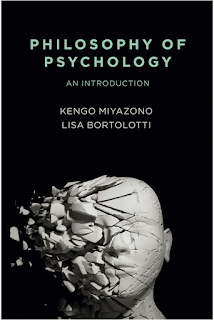 Rosa wants to pass her ballet exam tomorrow and she knows that she needs to rehearse the opening routine to make sure she remembers all the steps. Passing the exam is important to her, and she would be very disappointed if she failed. Yet she sits on the sofa to watch a movie instead of practising her routine. Given Rosa's goal (passing the ballet exam tomorrow), her behaviour (watching a movie instead of practising) may be considered irrational since she does not take the appropriate steps to fulfil her goal (see chapter 1 on rationality).
Giorgio describes himself as an exceptionally generous child, always willing to support his friends. However, that is not how his friends describe him. On a number of occasions, they have observed that Giorgio has put his own needs before theirs and has refrained from sharing snacks or helping them with their homework. They think of him as mean and selfish. If Giorgio’s friends are right, then we can say that Giorgio does not have an accurate representation of himself. In particular, he attributes to himself qualities (such as generosity) that he does not have (see chapter 2 on self-knowledge).
Elsa, a white US citizen, thinks of herself as a very egalitarian person who respects everybody and considers them all equal, independently of ethnic origin or skin colour. However, when she goes to work, she avoids sitting next to Asian passengers on the bus and, when she talks to her colleagues at work, she tends to ignore her Nigerian secretary. Elsa does not have explicit beliefs that are prejudiced against people who look different from her but behaves in ways that are inconsistent with her explicit beliefs and values. She is vulnerable to implicit biases for which she may or may not be responsible (see both chapter 3 on duality and chapter 6 on free will and responsibility).
You may have experienced similar failures of rationality and self-knowledge and have encountered biases in yourselves and others, especially when considering beliefs and choices that have morally relevant implications (see chapters 4 and 5 on moral judgement and motivation). Indeed, the view that human cognition and agency are imperfect is not new. However, our book does not just claim that human cognition and agency are limited; on the basis of relevant psychological studies, it also makes some potentially surprising and controversial claims about the extent to which human cognition and agency are limited.
Human cognition and agency can be ‘imperfect’ in another sense; i.e. they are vulnerable to impairments and behavioural anomalies. Our book discusses delusion and confabulation (in chapter 7) and autism and psychopathy (in chapter 8). Thinking about unusual behaviours helps us understand how cognition works and how vulnerability to disorders of the mind relates to the failure to meet ideal standards.Overall, we are not committed to a pessimistic conception of human cognition and agency. Rather, we advocate a realistic conception that is informed by psychological findings and is defended by philosophical arguments. We resist two extreme views of human cognition and agency. On the one hand, we resist an overly optimistic view according to which human cognition and agency are perfect (or near-perfect) with respect to ideal standards such as rationality, self-knowledge, and free and responsible agency.
On the other hand, we resist an overly pessimistic view according to which human cognition and agency are hopeless with respect to these ideal standards. By learning about the nature and the extent of their limitations, human agents can improve their performance. That is one of the reasons why philosophy of psychology matters. It does not simply provide information about what we can or cannot do. It offers us the resources to enhance our performance (in reasoning, decision-making, problem-solving, etc.) so that we can get closer to our ideal standards.
Posted by Lisa Bortolotti at 08:00