I'm Anneli Jefferson, Visiting Research Fellow at King's College London, and I'm interested in philosophy of psychology and ethics, particularly in issues at the intersection of these two fields.

People tend to systematically overestimate their own abilities and their likelihood of positive future outcomes and to underestimate the likelihood of negative outcomes. Most commonly, this optimism bias is measured at a group level. While it is clear that some people must be making overly optimistic judgments if, for example, 70% of people asked think that they are less likely than their peers to experience a car accident, it can be difficult to tell which individual person’s outlook is actually unrealistically optimistic.

In a recent study, Sharot et al. used an update paradigm to measure the optimism bias at the individual level. Participants were asked to rate their likelihood of experiencing various negative events and were subsequently confronted with the average likelihood of experiencing the respective events. All estimations were then repeated, so that participants had the opportunity to update their initial estimate. It turned out that on average, participants were more likely to update their estimate in response to information that was desirable than when they received information that was undesirable. 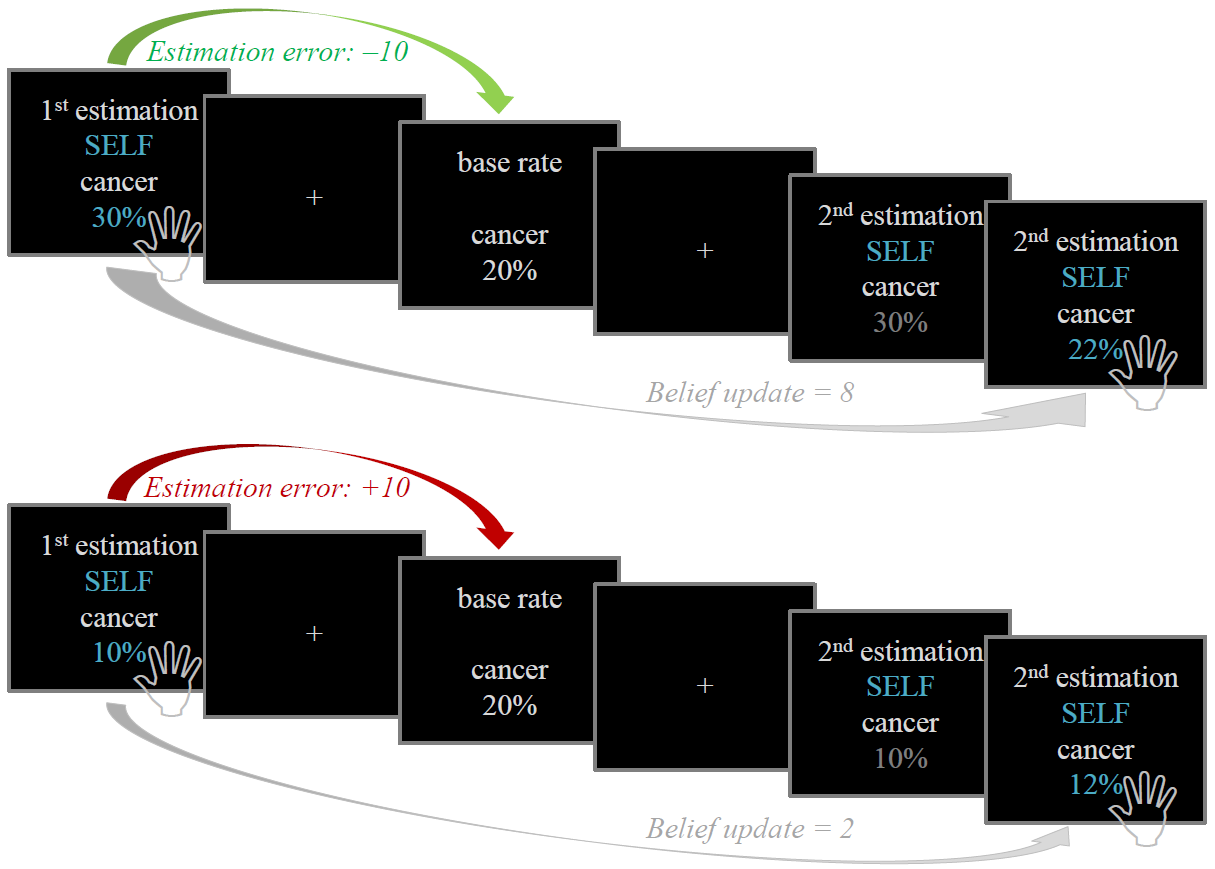 We modified this elegant paradigm in order to find out whether we could reproduce the bias towards neglecting undesirable information. In addition, we tested whether this tendency to exhibit optimistically biased belief updating was stronger for self-related judgments than for other-related judgments. To this end, we let participants estimate the likelihood of experiencing negative events in the future, then presented them with the average likelihoods of the respective events, and subsequently gave them the opportunity to revise their initial estimate. In half the trials, estimations referred to oneself, in the other half to a similar other (i.e. someone of a similar age and with a similar socio-economic background).

It turned out that by and large, belief updates were again greater in response to desirable than undesirable information and this effect was more pronounced when making judgments regarding one’s own future than when making predictions for a similar other. What is more, we found that the tendency to disregard undesirable information to a greater extent in self-related than in other-related judgments correlated with optimism as a personality trait, which we tested for separately with the Life Orientation Test (LOT-R).

So, overall, the findings demonstrate the optimism bias in belief updating, because new information calling for unfavorable updates was selectively dismissed. This tendency to neglect undesirable information was significantly stronger in judgments referring to oneself than to others, but only in persons with high trait optimism. Thus, the generally positive future expectations in persons with high trait optimism may reflect the perception that one’s own outlook is better than that of others, rather than reflecting positive expectations about the future more generally.

Kuzmanovic, B., Jefferson, A. & Vogeley, K. Self-specific optimism bias in belief updating is associated with high trait optimism. Forthcoming in Journal of Behavioral Decision Making.
Posted by Anneli at 08:00