Cognitive Futures in the Humanities 2015

In today's post Rachel Gunn reports from The Cognitive Futures conference which took place on 13-15 April at Worcester College, University of Oxford (in the picture).

Cognitive Futures in the Humanities is a multidisciplinary conference which aims to bring together literary disciplines, linguistics, theater and the arts, philosophy, psychology and neuroscience for our mutual benefit. The three day conference was held at Worcester College, Oxford and is in its third year, the first being held at Bangor and last year's being at Durham. There were a variety of panels on such diverse topics as narrative, imagination, mirroring and reflexiveness, kinesthetics, memory, embodied cognition, perception and hallucination. 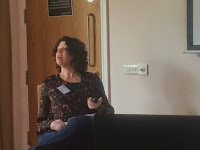 In the ‘clinical’ panel I (pictured above) presented a paper on thought insertion ('On thought insertion', forthcoming in a special issue of Review of Philosophy and Psychology on Voices and Thoughts in Psychosis) where I used first person narratives from mental health web forums to show the heterogeneity of the experience, highlight some of the characteristics and demonstrate the huge difficulty people have explaining this bizarre experience (see my previous blog on thought insertion).

Magdalena Antrobus presented a paper on depressive realism (DR) (part of the work involved in project PERFECT) which highlights the research on the ability of people who have mild depression to make more accurate judgements about their own control over particular tasks compared with those who do not have any depressive symptoms (see her previous blog on depressive realism).

Another panel on imagination included speakers talking about creative imagination, autism and eating disorders. Nicola Shaughnessy gave a talk in how ‘disorderliness’ or a suspension of prior knowing may be required for creativity and how this might manifest itself in certain psychopathologies. She looks to expand our understanding of how the neurotypical and the non-neurotypical might engage with drama, poetry and prose. 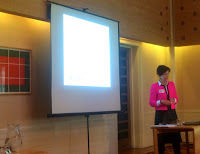 Ilona Roth (pictured above) talked about the notion of autism and of genius, highlighting that certain traits (e.g.: intense engagement with a chosen domain, perseverance and attention to detail) might be associated with academic and artistic achievement whereas other traits (eg: concrete and inflexible thinking) might be antithetical to creativity. She concludes that whilst it is possible to say that some people on the autistic spectrum have a measure of creative genius this is certainly not the norm and the vast majority of people on this spectrum find life extremely difficult without the ‘compensation’ of any special abilities.

Emily Troscianko gave a talk on the way literature is read and used by people with eating disorders. She argues that a scientific, cognitive approach to literature might help us understand how it relates to human subjectivity and how it might be used or understood by people with mental illnesses.

The panel on hallucination was made up of three talks from people involved in the ‘Hearing the Voice’ project at Durham University. Patricia Waugh (pictured below) talked about the novelist as voice hearer. When writing a novel the author David Mitchell talks of concentrating on the voices in his head and getting them to talk to each other – a kind of controlled, creative dissociation. Waugh suggests that gaining a better understanding of this process might have therapeutic benefit for those with distressing ‘voice hearing’ experiences.

Marco Bernini talked about how AVHs might mediate the world. The literature tells us that people experience ‘voices’ about themselves (in the third person), talking directly to them and talking about the world. Bernini argues that understanding this phenomenon in terms of perspective taking and narrative theory might have benefits in cognitive models of AVHs. He aims to understand how AVHs might mediate the world and provide epistemic authority to the person experiencing the ‘voice’.

A full program listing all the speakers and the abstracts can be found here.