Here I am reporting from "Optimism – Its Nature, Causes, and Effects" (#optimismbias2016), an interdisciplinary workshop organised by Anneli Jefferson and myself as part of the Costs and Benefits of Optimism project. It took place in Senate House, London, on 25-26th February 2016, and featured both philosophers and psychologists as speakers and participants.

We wanted to investigate whether the notion of unrealistic optimism is coherent and how its different manifestations relate to one another. For instance, does the disposition to discount evidence against the success of one’s performance lead to the acquisition of positive illusions about the self? In addition, we wanted experts to comment on the empirical evidence suggesting that unrealistic optimism has both costs and benefits. 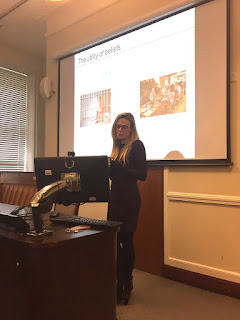 On day 1, Tali Sharot (UCL) kicked off the workshop. Tali (pictured above) asked how the human brain forms optimistic beliefs and reported recent findings from her lab. She focused on the biases in the updating of beliefs: when the news is good, we tend to change our beliefs accordingly,  but when news is bad, we do not incorporate that information into our estimates to the same extent. In general, undesirable information is given less weight, but those who are low on optimism are better at tracking information that is worse than expected.

The second speaker was Ben Tappin (Royal Holloway) who presented a study about asymmetrical learning in moral situations concerning in-groups and out-groups. Just like Tali, he also argued that we tend to update beliefs asymmetrically, but focused on the case in which we are more sensitive to morally undesirable information concerning our out-group than that concerning our in-group. We are more prone to revise an estimate of how likely out-group members are to perform a morally undesirable action than we are to revise our estimate for the in-group. Interestingly, this applies also when the in-group vs. out-group contrast is not ideologically laden, and there is no strong investment in belonging to a particular group (e.g. psychology students versus sociology students).

Anneli Jefferson (Birmingham) spoke next. She asked how we should understand the claim that unrealistic optimism is an adaptation. She started from considering the error-management theory, according to which biases have evolved to help the organism make the least costly error when deciding under uncertainty. Can error management theory show that unrealistic optimism is an adaptation ? According to Haselton and Nettle (2006) in high benefit/low cost decision making scenarios, a positive illusion conveys a selective advantage not only compared to a negative illusion, but also compared to an accurate belief. Anneli argued that unrealistic optimism seems to have a much broader scope and can lead to a number or undesirable outcomes in ways that contradict the predictions of error management theory. 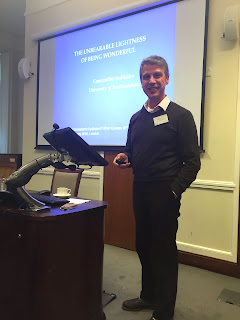 Constantine Sedikides (Southampton) closed day 1 of the workshop considering the various theories that can make sense of our attempts at self-evaluation: (1) self-assessment, (2) self-verification, and (3) self-enhancement. In his research he found that we are motivated by self-enhancement rather than by self-assessment or self-verification: we do not want to know what we are really like, and especially we do not want to know if we have negative traits. But when it comes to other people, we do want to know what they are really like. It is interesting that these tendencies are widespread across cultures: both the Americans and the Japanese self-enhance, but Americans do so for traits that suggest leadership and originality, whereas the Japanese do so for traits that suggest loyalty and the capacity to compromise. Constantine (pictured above) argued that we can use introspective reflection to control self-enhancement (but the effects are very short-term) and that we self-assess more accurately when we are held accountable for doing so. 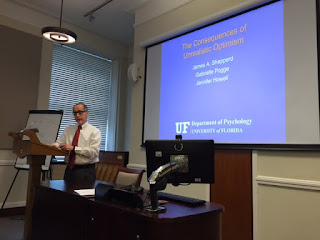 James Shepperd (Florida) opened day 2 of the workshop with a detailed review paper about the positive and negative consequences of unrealistic optimism. Although the literature seems to suggest that optimism is associated both with benefits (goal-directed action, goal persistence, positive affect, being liked by others) and costs (avoidance of prevention measures, risky behaviours, perception of invulnerability), James did not find any conclusive results regarding costs and benefits in the 700 papers on the topic he reviewed, due to methodological problems in the relevant studies. The conclusions were that at the moment there is little that can be said about the consequences of optimism because results are mixed, but that previous risk factors have to be controlled for more systematically, more individual studies need to be done, and actual experiments need to be designed.

Miriam McCormick (Richmond) spoke next, and her topic was rational hope. What is hope and can it be rationally assessed? Miriam argued that hoping that p requires (1) desiring that p; (2) believing that p is possible but not certain; and (3) being disposed to feel, act, expend energy, relate to others in ways that suggest the possibility of obtaining p. According to Miriam, hope is open to rational assessment and the dimensions of such assessment are: (a) epistemic (likelihood of the hoped outcome obtaining); (b) practical (benefits of hoping); and (c) practical and epistemic (likelihood of hope having on effect on the outcome). 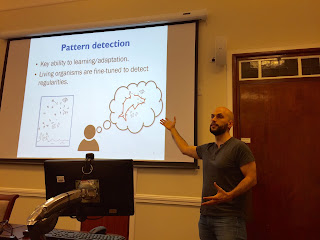 Fernando Blanco (Deusto) (pictured above) presented his findings on causal illusions. These illusions obtain when people believe that there is causal link between two events where there is none (the illusion of control is one example of this). We are prone to causal illusions when there is a high frequency of action-outcome coincidences. People with depression, according to Fernando, experience passivity: the more depressed they are, the lower the probability of action. Engaging in fewer actions means that there are fewer action-outcome coincidences, and thus less illusion of control. It is frequently detrimental to be subject to causal illusions, because they may generate superstitious beliefs, and beliefs in the efficacy of alternative medicine. There are interventions that can be efficacious in reducing such illusions: for instance, providing an additional cause for the same outcome makes the illusion disappear.

I (Birmingham) was the last speaker of the workshop, and talked about optimism and agency. How can we make sense of the literature on costs and benefits of optimism? I focused on three areas: (1) health, (2) relationships, and (3) performance. Does optimism improve health outcomes, make our relationships more stable and satisfying, and correlate with better performance (or just more persistence)? One frequent suggestion to explain mixed results in these areas is to distinguish different forms of optimism, one that is not-so-adaptive (naive optimism, situational optimism, or a defensive attitude to negative feedback) and one that is beneficial in a variety of respects (behavioural coping, dispositional optimism, or a self-affirming attitude to negative feedback). I argued that optimism is good when it supports motivation and perceived agency: when we believe that we are largely coherent, competent and self-efficacious agents. This, in turn, helps us persevere in the pursuit of our goals, but in a way that is not blind to set-backs and obstacles.

The workshop was an example of a successful interaction between philosophers and psychologists working on optimism, and also generated a lot of helpful discussion thanks to a very well-informed and engaged audience.