Talking to Our Selves: Reflection, Ignorance, and Agency

Today's post is by John M. Doris, Professor in the Philosophy–Neuroscience–Psychology Program and Philosophy Department, Washington University in St. Louis. Doris has been awarded fellowships from Michigan’s Institute for the Humanities, Princeton’s University Center for Human Values, the National Humanities Center, the American Council of Learned Societies, the Center for Advanced Study in the Behavioral Sciences, the National Endowment for the Humanities (three times), and is a winner of the Society for Philosophy and Psychology’s Stanton Prize.

He authored Lack of Character: Personality and Moral Behavior (Cambridge, 2002) and Talking to Our Selves: Reflection, Ignorance, and Agency (Oxford 2015). With his colleagues in the Moral Psychology Research Group, he edited The Moral Psychology Handbook (Oxford, 2010). At Washington University, Doris’ pedagogy has been recognized with an Outstanding Mentor Award from the Graduate Student Senate and the David Hadas Teaching Award for excellence in the instruction of first year undergraduates.

In the current post John discusses Talking to Our Selves: Reflection, Ignorance, and Agency.

If you’ve worked in an office, you’re probably familiar with “honor box” coffee service. Everyone helps themselves to stewed coffee, adds to the lounge’s growing filth, and deposits a nominal sum in the honor box, with the accumulated proceeds being used to replenish supplies. Notoriously, this system often devolves into a tragedy of the commons, where too many people drink without paying. Unless some philanthropic soul goes out of pocket to cover freeriders, the enterprise goes in the red, and everyone’s back to extortionate prices at the cafe.

Fortunately, the tragedy of the honor box may be readily ameliorated; if images of eyes are placed prominently near the coffee service, deposits increase. Or so Bateson and her colleagues (2006) found: the take in a Psychology Department’s honor box (computed by amount contributed per liter of milk consumed) was nearly three times as large when the posted payment instructions were augmented with an image of eyes as when they were augmented with an image of flowers.


An extensive experimental literature, together with the large family of “dual process” theories attempting to make sense of it, suggests the widespread presence of “incongruent parallel processing” where two (or more) cognitive systems (with “cognitive” capaciously construed) issue in divergent outputs with regards the some same object. (The size of the literature and the existence of supporting theory, I argue in the book [e.g., 44-50] is critical, given the recent “RepliGate” controversy in psychology.) This incongruence raises the prospect of “defeaters” for morally responsible agency, where the causes of a behavior (namely, those causal factors that appropriately figure in a well formed psychological explanation of a behavior) would not be counted by the actor as reasons for that behavior. Where defeaters obtain, I argue, agency is imperiled, so in those cases where we cannot confidently rule out the presence of defeaters, the attribution of agency is not warranted. Thus, I claim, skepticism about agency threatens.

On the standard interpretation, the eyes remind people that they may be seen – not so easy to stiff the honor box in front of a disapproving colleague – and pay a reputational cost for freeriding. Since human beings are social organisms sensitive to reputational considerations, they may thereby be moved to donate.

Participants in such studies are not typically debriefed, so we don’t know for sure what they were thinking. But the most likely reading is that people are, in a sense, not thinking much of anything. That is, the Watching Eyes Effect is supposed to involve an unconscious, effortless, processing, rather than conscious, concerted calculation; the eyes are hypothesized to influence behavior without those influenced being aware.

If people aren’t typically aware of the Watching Eyes Effect when they’re being affected by it, what might they think, if they found out afterwards? A cheapskate with a policy of freeriding might feel a little resentful; he’s been made to do something he doesn’t judge to be sensible. A more upright sort might think she’s done the right thing, but not for the right reasons; doing it because you’re watched is not the same thing as doing it because it’s decent, honest, or fair. Those who favor fair play only when it burnishes their reputation might also have qualms, since Watching Eyes may influence people in conditions conducive to anonymity (e.g., Haley and Fessler 2005: 250). In none of these cases does “I did it because of the eye spots,” sound like a compelling rationale. 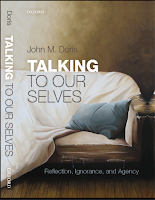 The Watching Eyes Effect is part of a large family of studies identifying influences on behavior that are both unconscious and unexpected.  In sum: you may not know what you’re doing, or why you’re doing it, and if you did know, you might not like it.  Evidently, the subversive unconscious is everywhere at work (though these workings may be more absurd than Oedipal).  Should you take this prospect seriously, you ought begin to worry about who -- or what -- is running your show. This anxiety, I argue in Talking to Our Selves (Oxford 2015), instigates skeptical uncertainty about morally responsible agency.

I also claim the skeptical threat may be ameliorated, by a suitably crafted theory of agency.  But that’s the work of the book.