British Society for the Philosophy of Science Annual Conference 2016

The Annual Conference of the British Society for the Philosophy of Science was held at the University of Cardiff Business School (pictured below), on 7th and 8th July 2016. The conference featured four keynote lectures and several papers in parallel sessions. Here I am briefly reporting from the two keynote lectures delivered on the second day of the conference. 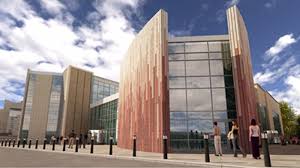 Samir Okasha (University of Bristol), pictured below, discussed in his keynote lecture the use of intentional language in describing the work of evolution. For instance, sometimes we say that the gene “knows” that it was inherited, or that an organism has a preference for a certain outcome to be selected. How should we understand the use of intentional language in this context? Is the intentionality of the language of biology something we can dispense with if we choose to, is it just a shorthand? Samir argues that it is more than a shorthand and delivers insights into evolution.

Darwinian evolution is described in terms of goals and strategies, and rationality-inspired concepts are used in decision-theory and game-theory. Does this use reflect a bias? Maybe something like hyperactive agency detection? Or is it a natural and justifiable way to describe biological phenomena? Samir argued that the truth is somewhere in between these two positions. 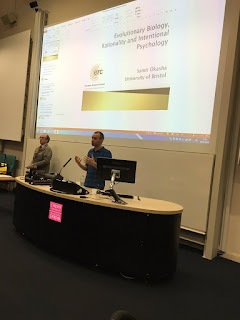 Agential thinking is important because it suggests unity of purpose, a single goal. If the traits of the same organism pull in different direction then the use of agential thinking or intentional talk is not legitimate. Agential attributions presuppose rationality and unity of purpose, coherence, and similarly to treat an organism as an agent requires consistency of purpose: traits need to have complementary not antagonistic functions.

Lisa Bortolotti (University of Birmingham), pictured below, presented a paper summarising some of the findings from project PERFECT and the Costs and Benefits of Optimism project, and argued that so-called positive illusions have several benefits for agency despite their epistemic irrationality. As previously discussed on the blog, she showed that increased wellbeing and socialisation (which are correlated with positive illusions) contribute to supporting an agent's motivation to pursue her goals. Moreover, the illusion of control (that we can control external events) and the illusion of superiority (that we are better than average in a number of different domains) contribute to enhancing the sense of oneself as a competent and efficacious agent. 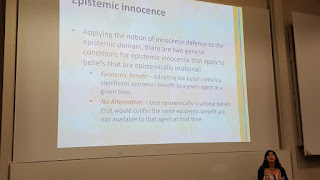