This post is by Fleur Jongepier (picture below). Starting Autumn 2017 she will be based in Cambridge (UK), working on the role and value of self-knowledge in contemporary liberalism. 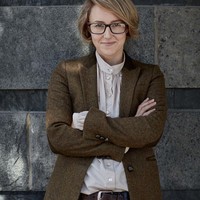 Normally, our sincere self-ascriptions, like “I want some coffee” or “I hope the meeting will be cancelled”, are not open to correction or challenge, for instance by asking me “Are you sure?”. Indeed, we would normally consider it inappropriate to do so (as expressivists like Dorit Bar-On have argued, see e.g. Bar-On and Long 2001; Bar-On 2004). Now most traditional theories of self-knowledge think of the special sort of authority that subjects have when speaking about their own mental states is to be explained epistemically. In other words, what is referred to as ‘first-person authority’ is typically explained in terms of self-knowledge: it’s because you know your own mental states particularly well that you are particularly well-placed to say something about them.

First-personal authority gets more complex, and I think perhaps philosophically and otherwise more interesting, when we consider more problematic first-personal statements. Consider for instance an utterance like “I am going to commit suicide” or “I should kill my daughter.” Sadly, some people self-ascribe these sorts of mental states, too – not just beliefs about the rain or a desire for getting a beer from the fridge (despite most of the examples in the self-knowledge literature).

But suppose that you are a close friend or family member of the person making one of these utterances, and suppose further that you actually know the utterance is false. Perhaps you found out that the person who - sincerely and perhaps repeatedly - thinks and says she wants to kill herself does not really mean it. Or you come to know, for instance, that the person who says she wants to kill her daughter suffers from OCD and does not genuinely have the desire to kill her daughter. Damiaan Denys for instance describes the following prototypical case of a young mother suffering from OCD:

When I’m alone at home and I see my daughter sleeping in her crib then I can see myself strangling her. I’m terribly shocked by the thought and I am very frightened by it. If nobody holds me back, I could murder my daughter. I don’t want to harm her, but there is no guar- antee that I never will. I can’t control myself any longer. I thought I was a good mother, but the fact that I think about it says something about who I really am. It shows that perhaps I don’t love my daughter enough. I don’t want to think about it but I’m not able to keep the thought out of my mind. The harder I resist, the stronger the thought is. (Denys 2011)


This raises many questions, among which an important question about first-person authority. What are we to think about the status of these subject’s avowals? Do they still have the same sort of authority that normally attaches to first-person statements about one’s mind?


The second and third views are versions of the traditional view according to which self-knowledge and first-person always come (and go) together. The first view is different in that it allows for a potential decoupling of the two. I think it’s actually the view that’s adopted outside of philosophy. I don’t think we normally are not inclined to chalenge or correct people’s self-ascriptions because people have self-knowledge, or we assume that they have self-knowledge. Another way of arguing for the first view is to look at what’s wrong with the other two ‘traditional’ views. This is what I aim to do in the next blogpost.