Morality Constrains What we (implicitly) Think is Possible 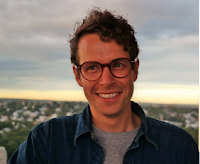 My name is Jonathan Phillips and I earned my Ph.D. in Philosophy and Psychology at Yale in 2015. I am now a postdoc in the Moral Psychology Research Lab at Harvard. My research falls in the intersection of psychology, philosophy, and linguistics, and has focused on the psychological representation of modality, or the way our minds represent possibilities.

One incredibly important aspect of human cognition is that we are able to think not only about what is, but also what could be. This ability to represent and reason about non-actual possibilities plays a critical role in many of the judgments that have long interested philosophers and psychologists: it is essential, for example, in how we determine the causes of past events, decide whether a person acted freely, or figure out whether someone is morally responsible.

One interesting, though often overlooked, feature of these kinds of judgments is that humans seems to able to make them quickly and effortlessly. So, to the extent that they require us to represent or reason about alternative possibilities, we must not be doing it consciously or deliberatively. Instead, it seems that we must have some access to a default or implicit representation of possibility.

We recently set out to test this idea in a series of studies that were just published in the Proceedings of the National Academy of Sciences. To get a sense for how the studies worked, start by considering the following scenario:

Josh is on the way to the airport to catch a flight for a hunting safari in Africa. He leaves with plenty of time to make it there, but his car breaks down on the highway. Now Josh is sitting in his car near a busy intersection, and knows he needs to get to airport soon if he is going to catch his flight.

Now, take a minute to decide whether it would be possible or impossible for Josh to do the following things:

(1) hail a taxi at the intersection

(3) teleport himself to the airport

(5) sell his car for a ride to the airport

Using these kinds of events, we then asked whether there was a difference in how people reflectively judged possibility and the way that they implicitly represented possibility. Accordingly, half of participants were asked to make judgments about the possibility of these events very quickly (<1500ms), while the other half were allowed to deliberate before deciding. (If you’re interested, you can try out the study for yourself, here.)

We then compared these two kinds of judgments of possibility for each category of event: 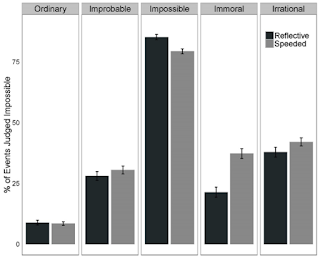 As you can see, one of the most striking findings was that, when participants had to answer quickly, they more frequently judged that immoral were impossible. The same was also true irrational events, though to a lesser extent.

While it may initially seem puzzling that we implicitly treat immoral and irrational events as impossible, one way of thinking about why this would be is to note that this kind of error could often be useful on the whole. Out of the infinite number of non-actual possibilities that we could represent, we seem to default to only considering those that would be both descriptively viable but also prescriptively valuable.

If you're interested more in thinking about modal cognition from a theoretical perspective, you might also try taking a look at this paper on the psychological representation of modality, which is forthcoming at Mind & Language.