Ignorance and Irrationality in Politics

To what extent should citizens be informed about the issues on which they vote for democracy to function? When ideology, biases and motivational processes drive political belief formation, should voters be considered irrational? These questions and more were the focus of the Ignorance and Irrationality in Politics Workshop organised by Michael Hannon, Assistant Professor of Philosophy at the University of Nottingham, and held on 10th – 11th June at the University of Nottingham. In what follows, I summarise a few of the workshop talks. 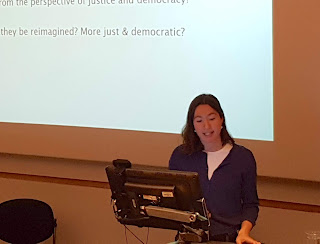 Zeynep Pamuk, Supernumerary Fellow in Politics at St. John’s, Oxford, discussed how decisions about which science projects to fund can both ameliorate and exacerbate ignorance. Zeynep explained how choices at the level of how to distribute funding and conduct research determine what we know and don’t know, through:

(i) the selection of research questions: what’s seen as worthy of pursuit is somewhat determined by a researcher’s context, background, biases, etc.

(ii) disciplinary norms. Consider the study of GMOs for instance, where the majority of early researchers were genetic engineers, and the study of impacts was confined to the cellular level – only later did environmental scientists study the broader effects and discover that some GMOs could be detrimental to seeds in other areas.

(iii) composition of study populations. Consider the underrepresentation of women and people of colour in cancer research trials.

(iv) modelling choices. A model is a representation, in which researchers have to make simplifying assumptions, resulting in approximations.

Zeynep then considered measures which might be ameliorative, including exposing choices with the hope that people will change their behaviour; democratic input into setting priorities as well as distribution among different approaches; ensuring that diversity and dissent is supported; preventing scientific monopolies over funding, ensuring more competition, as well as funding different kinds of approaches.

She also discussed a series of other suggestions, including the distribution of funds through a lottery system after an initial screening for quality; earmarking funds for unconventional approaches and less established scientists; and encouraging a diversity of viewpoints on committees. 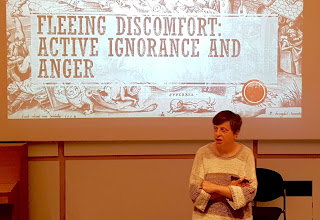 Alessandra Tanesini, Professor of Philosophy at the University of Cardiff, discussed the relationship between active ignorance and anger. She maintained that anger is a negative emotion that arises in response to a perceived wrong, and includes a desire to redress that wrong.

She introduced the notion of “status anger”, a characteristic emotion of some vices of superiority, and a reaction to a perceived threat to privileges. Furthermore, anger can be used by those in positions of privilege to both intimidate and to humiliate, and can restore one’s possession of the positional good.

She also discussed “virtuous anger”, (similar to Nussbaum’s “translational anger”, and drawing on feminists of colour and those writing about the black civil rights movement, such as Lorse, Lugones and Baldwin). Calls for civility in the face of virtuous anger are often used as a way to silence people. Responding and dampening down one’s anger can damage the capacity to fully understand one’s situation, a form of hermeneutic injustice.

Alessandra explored how anger can be efficacious in the fight against oppression. It supplies energy and motivation and facilitates activism. It enables us to hold people responsible for their actions. At the same time, it is a ‘burdened virtue’ because it damages the wellbeing of those bearing it: often costing one’s health and relationships.

Virtuous anger can be silenced, constituting an injustice. Alessandra drew on the testimony of scholars who teach critical race theory, and discussed how white people often respond to learning about deep rooted racism with fragility (crying, for instance). She argued that this can be a way of not listening, of directing attention toward your own discomfort, and ultimately keeping yourself in ignorance – as a result, the anger of a person of colour providing testimony can be cut off and silenced.

Alessandra encouraged us to stay with our discomfort in the face of virtuous anger, to listen sincerely and to not divert attention away from important testimony by making our own discomfort the focus of the conversation. 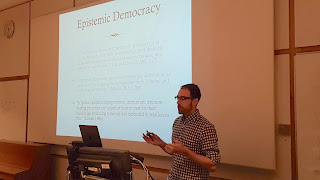 Michael Hannon, explored the notion of empathetic understanding and its place in deliberative democracy. He suggested that political epistemology standardly assumes a kind of veritism in which the legitimacy of democracy is based on its epistemic status, where value depends on practices which result in the production of true beliefs.

This is problematic for real life democracy, where there is often a poor evidential basis for policy making, as well as the influence of ideology and bias to contend with. In addition, deliberation and the exchange of reasons often result in further belief polarisation, rather than less.

Michael explored whether democratic deliberation may have a kind of epistemic value that goes above and beyond the value of generating true beliefs. He provided an account of the notion of “Verstehenism” (a term borrowed from 18th and 19th century German philosophy). For Michael, Verstehenism amounts to an empathetic understanding of other people, requiring perspective taking and the ability to see things from the actor’s point of view.

Michael then articulated some benefits of Verstehenism. It could decrease polarisation. For instance, many Democrats and Republicans hold negative views of each other, stemming from feelings of fear and anger. Taking a Verstehenist perspective might not vindicate the ideas of one’s political opponents, but could explain why they are persuasive to the other person, bring us closer to the possibility of shared understanding.

Verstehenism could also allow us to reap the benefits of cognitive diversity, and give us a means to exit our echo chambers.