The Phenomenology and Mental Health Network organized a workshop last June 20th at the Collaborating Centre for Values-based Practice in Health and Social Care at St. Catherine’s College, University of Oxford. The theme was Phenomenology and Qualitative Health Research. 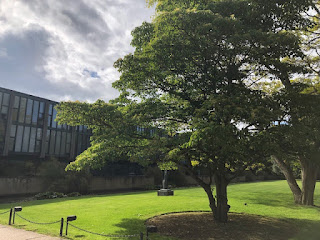 The aim of the workshop was to explore different ways in which philosophical phenomenology is applied in qualitative research and address issues that arise from the increasingly collaborative nature of these fields. The organizers were Anthony Fernandez, Marcin Moskalewicz and Dan Zahavi. I was very glad to be included among the speakers and have the chance to present some of my work. This report includes a detailed summary of everyone’s talks. I thank everyone for sharing their notes to make this report. 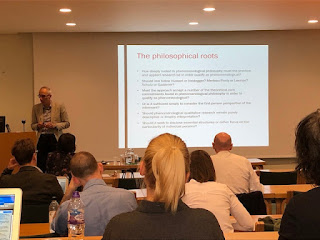 The first talk was Applied Phenomenology by Dan Zahavi, professor of philosophy and director of the Center for Subjectivity Research (University of Copenhaghen and University of Oxford) Zahavi addressed some fundamental questions that arise from the influence that phenomenological philosophy has had on empirical science:

Zahavi mainly addressed Max van Manen’s work but he also reviewed some common assumptions and made some recommendations.

The common assumption in van Manen’s work (and in applied phenomenology in general) is that because we have beliefs, biases and other presuppositions that structure our view and impede our access to the things themselves, if we want access to the things themselves, it is necessary to bracket such theoretical presuppositions and prejudices (and perform the epoché).

But Zahavi argued that this view is mistaken. In early works of phenomenology (such as in Husserl’s descriptive phenomenology in Logical Investigations or in Reinach’s 1914 lecture What is Phenomenology?) we find discussions of the return to the things themselves and detailed descriptions of experience without there being any reference to the reduction or the epoché.


Zahavi recommended that there are several other features of philosophical phenomenology that are more relevant to the qualitative researcher than the epoché and the reduction. Phenomenological tools can be employed in a way that can allow new insights and create better therapeutic interventions and this is does not necessarily need to be achieved by following a rigorous method. One of the possible ways to achieve this could be, for instance, by developing a toolbox.

Lastly, Zahavi suggested that van Manen’s book Phenomenology of Practice offers a presentation of the phenomenological method that is problematic. One of the reasons for this is that when it comes to characterizing phenomenological research, van Manen presents conflicting views.

For instance, in some occasions van Manen proposes that phenomenology is a philosophy with an interest in the particular, and in others that phenomenology should aim to capture essential aspects of the lived experience. Conflicting statements of the sort together with an insufficient guidance for the clear use of terms such as pre-reflective self-awareness, lifeworld or intentionality, are likely to make it a complex endeavour for researchers who are not professional philosophers to apply the method in their practice. 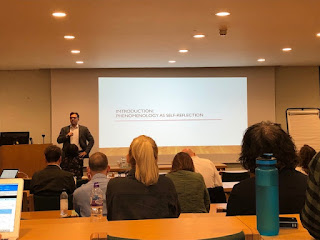 Fernandez argued that when phenomenological methods have been adapted to empirical research, this has typically led qualitative researchers to focus primarily on philosophical methods (such as the reductions and the epoché) and to overlook some of the most important contributions in phenomenology.

One of these main contributions are the conceptual distinctions among the structures of subjectivity or what Heidegger calls ‘existentials’. These include temporality, selfhood, spatiality, intentionality and affectivity. When the existential is ‘attunement’, examples of modes of attunement include: fear, anxiety, joy or boredom. In their own study Fernandez and Køster take existentials as lenses for investigating modal alterations in the experience of profound bereavement.

Fernandez and Køster propose that qualitative researchers resort to front-loaded phenomenology to model their approach. How is this done? Researchers can rely on phenomenological concepts to develop research questions and interview protocols and maintain their own traditional methods for doing the interviews and data analysis. This allows for phenomenological concepts to be imported into the initial study design whilst keeping the study’s methods from the relevant science rather than from philosophical phenomenology. 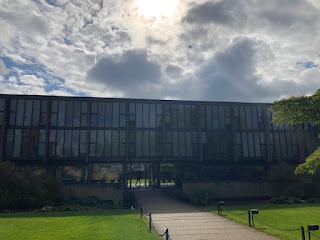 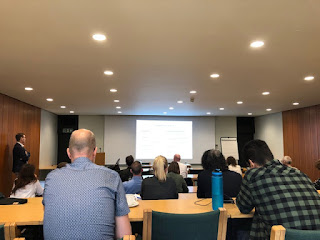 The study considered two modes of time: clock time (which includes characteristics such as: being unidirectional towards the future, having uniform movement or pace, presenting sequences with fixed orders), and human or lived experience (e.g. inward time that can be multidirectional, go backwards and forwards, into the past or into the future; inward tempo that can be accelerated or decelerated; sequences that can be reversed in the mind, etc.)

Moskalewicz and Popova in particular explored the paradoxes of the temporal experience. They found that patients’ orientation in world time became ‘chemo-clock’ and that patients’ desynchronization (acceleration and deceleration) during treatment increased. They also observed a shortened horizon of expectations and unspecified dreams of recovery as well as different attitudes towards the past. They argued that these experiences present profound changes in the deep structures of temporality.

One of the interesting features of the interview technique that they developed was the use of indirect questions. For instance, in order to enquire about changes in temporal perspectives, the focus on the past, present and future after the diagnosis, researchers asked participants questions such as: how often do you think about the past? or how do you imagine your day will be like in one year’s time? 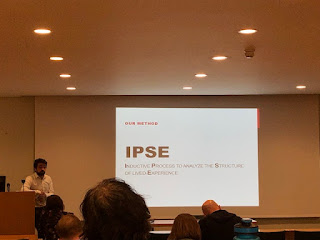 Jordan Sibeoni (Argenteuil Hospital Centre; ECSTRRA Team, Université de Paris) started his talk mentioning the important shift from doctor-centered to patient-centered approach to treatment outcomes that has happened during the last decade in the field of medicine.

This new context has led to the emergence of new concepts such as patient-reported outcomes (PROs), and to ways of measuring them called patient-reported outcome measures (PROMs). These are essential outcome measures that are demanded by health authorities and regulatory agencies and that are also useful for physicians, patients and health policy makers.

Sibeoni presented the work he has done in collaboration with Anne Révah-Levy (Paris Diderot University; ECSTRRA Team, Université de Paris) and their team of researchers. In response to the demands to develop expertise in the use of qualitative methods to explore complex issues in medicine and psychiatry, they have progressively developed their own method called IPSE (Inductive Process to analyze the Structure of lived Experience).

The method is specifically tailored for medical research and relies on an inductive, descriptive phenomenological process that aims to get as close as possible to the patient’s lived-experience and to create concrete applications such as ways of measuring patient reported outcomes (PROMs)

Sibeoni explained that IPSE is anchored in an inductive process. The initial research question is never conceptual or theoretical but directly related to the life and experience of the patients, their families, or the healthcare professionals treating them. The starting point of a study is always an unanswered question concerning the experience of individuals involved in medical care.

The structure of the experience is the primary focus of the method though it is not considered as an end of their investigation but rather as a means. The main aim of the method is to translate the findings into concrete proposals for treatment and the organization of care; and to improve the health care pathway.

Sibeoni concluded the talk by mentioning that since the objective is to help improve patients' care and the quality of their lives, the choices of themes are always linked to and guided by this objective. That is, they are determined by the relevance and not the recurrence of the axes of experience developed in the analysis.

I gave the last talk of the day. I explored different methodologies inspired in phenomenology that have been proposed to study the subjective experience. The talk was specifically focused on Interpretative Phenomenological Analysis (IPA) and Micro-phenomenology. I analysed and compared the sort of data that they produce, addressed some limitations and discussed the possibility of using both methodologies for studying the experience of loneliness.

First, I distinguished two different types of investigation that can be done using Interpretative Phenomenological Analysis. IPA can be applied to (1) investigate the nature of specific disruptive subjective experiences or to (2) investigate the outcomes of therapy processes. We find an example of the first type in a study where it is argued that chronic benign low back pain may have a serious debilitating impact on the sense of self (Smith & Osborn, 2007).

An example of the second type is in a study that explored the process of therapeutic change in body-oriented psychotherapy for schizophrenia (Galbusera, Fellin & Fuchs, 2019) This study relied on an already well-accepted concept in phenomenological psychopathology of schizophrenia as a disorder of the self.

IPA follows an unstructured, conversational pattern, and the focus is mainly on the participants and on what is relevant for them (be that descriptions of significant moments or specific examples) This is why the second type of investigation can be easily translated into direct applications for improving the practice of specific therapies and it is the least controversial. But when it comes to attempting to explain the nature of subjective experience, one of the worries is that this methodology investigates only the reflective dimension thus leaving the essential structures of experience unexplored (Zahavi, 2018, 2019).

Some qualitative researchers are aware of such limitations and propose the use of multimodal approaches (e.g. Boden & Eatough, 2014) with the aim to move beyond the reflective. Combining methodologies does not come without challenges. However, it is worth exploring the possibility. If we accept a Husserlian framework where the constitution of experience is multi-layered, a phenomenological approach may be better done when we consider the different levels of constitution of meaning (Rodemeyer, 2019).

These levels go from the level of intersubjective community, (that includes meanings that develop within and are passed through different cultures), include the intersubjective interpersonal level (our bodies gaining their objective sense through the perception of others) and go all the way through the most elementary sensory experiences like bodily pain and pleasure.

The study that I conducted on the experience of loneliness offers many examples where different levels of constitution of meaning are involved. For instance, some participants have developed some tastes, habits and actions that prevent the possibility for intimacy to occur. In some of these cases, participants express that the lack of physical contact results into bodily sensations of pain. But, interestingly, in other cases not being surrounded by others translates into a bodily sensation of relief. These sensations of relief are embodied habits that are sedimented (not at a reflective level) and that participants do not often regard as part of the experience of loneliness.

Different methodologies have developed expertise to explore different levels of constitution of meaning. In the last part of the talk, I explored the compatibility of IPA and micro-phenomenology and gave examples of how both methods can be used in studies of the experience of loneliness and solitude. 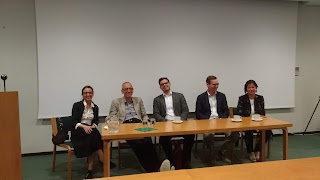