Self, Others and the State: Relations of Criminal Responsibility

Today's post is by Arlie Loughnan who is Professor of Criminal Law and Criminal Law Theory and Co-Director of the Institute of Criminology at the University of Sydney. She is the author of Manifest Madness: Mental Incapacity in Criminal Law (OUP 2012). 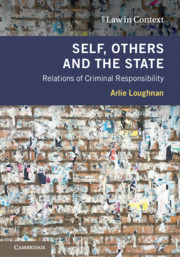 These two sets of atypical responsibility forms governing women’s responsibility for crime correspond to different relations of responsibility between self, others and the state. In the first half of the twentieth century, legal accommodation of violence by women meant that relations of responsibility centred on the relations of the accused woman with herself, where this relation was oriented around a personalised and psychologised notion of individual integrity. In recent decades, legal accommodation of violence against women oriented the self in relation to others, encompassing an extended sense of women’s autonomy, and implicating other actors, including state actors such as the police, in fulfilling that autonomy. This has meant that women’s responsibility for crime now has an ameliorative tenor, with the atypical responsibility forms that now populate the criminal law constituting an admission of state failure to protect women from violence.