Today's post is by Joseph Houlders, doctoral candidate at the University of Birmingham. In this post, he reports on the book launch for the new Oxford Handbook of Phenomenological Psychopathology. The event took place on 22 July 2019, and was chaired by one of the editors of the handbook, Professor Matthew Broome, Director of the Institute for Mental Health at the University of Birmingham. 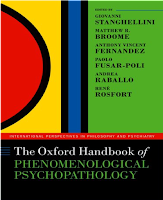 Five contributors to the handbook spoke at the launch:

The launch began with an apt question: to what extent can we understand and explain psychic illness? The central theme of the afternoon was how phenomenology may, or may not, shed light on issues in psychopathology – a field of research which studies ‘abnormal’ mental events. This involves asking what phenomenology is, to think about how best to put into dialogue with psychopathology. The answer to this is complicated, owing partially to a diversity of approaches and emphases amongst phenomenologists (and phenomenologically-inclined psychiatrists). Husserl’s phenomenology is different to Merleau-Ponty’s, and Merleau-Ponty’s is different to Heidegger’s, though there are of course many similarities too. To make matters more complicated, these figures differ not only with each other, but also with themselves: there are marked differences between their early and later writings.

There is a rich history of work in phenomenological psychopathology to help think about what the interaction between phenomenology and psychopathology can consist of, and when this interaction seems to work best. Many interesting examples were discussed during the presentations, for example: insights from the original phenomenological psychiatrist, Karl Jaspers; and ongoing interdisciplinary work carried out by Dan Zahavi and colleagues at the Centre for Subjectivity Research.

The talks and conversations that followed were often, at root, about the limits of communication and empathy. Mental disorder can include global alterations in experience of self and environment, and radical departures from ‘normal’ modes of experience, which can be very difficult to understand and to put into words. So, whilst we might agree that psychiatry should be about more than biological processes, there is still a worry about whether it is possible to conceive of and describe many of the subjective aspects of mental illness. Many argue that it is possible, and suggest that whilst there are, of course, limits to what we can describe (there is always a gap between the description of the phenomenon and the actual experienceof the phenomenon), this does not preclude improving our understanding of subjective experience of mental disorder to at least some degree.

The question of precisely what the phenomenological tradition offers to psychiatry was raised during the launch. For example, what does familiarity with the thought of Heidegger give a psychiatrist that they do not already have / would not eventually learn from their practice? Would they not already be aware of / would they eventually become aware of the importance of e.g. time, mood, and death in a patient’s experience? Do some of the concepts from phenomenology only serve to make conversations about a patient more abstract? Or are they, on the contrary, vital for the conceptualisation of certain symptoms reported by patients, which could otherwise seem mystifying?


One of the things that phenomenology appears to offer to psychiatry, or at least certain iterations of psychiatry, e.g. ‘operational’ psychiatry, known for its checklists of symptoms and tendency towards reductionism, is a reminder of the fundamental importance of the wider context of an individual’s experience. Whilst this reminder may seem like common-sense, the subjective, existential aspects of patients’ experience can be undervalued, forgotten, or ignored in psychiatric practice. By the lights of phenomenology at least, this appears to be a profound mistake.

The Oxford Handbook of Phenomenological Psychopathology is the result of a large and interdisciplinary collaboration: it took around 5 years to complete, and it has 98 chapters in total. It covers historical and contemporary work in the field and, of course, devotes a lot of analysis to first-person experience of a host of mental disorders, including schizophrenia and Obsessive-Compulsive Disorder. Congratulations to all who have been involved in putting it together!