Robert N. McCauley
Our book, Hearing Voices and Other Matters of the Mind, promotes a naturalistic approach, which we call Ecumenical Naturalism, to accounting for the long recognized and striking cognitive continuities that underlie familiar features of religiosity, of mental disorders, and of everyday thinking and action.

The case for those continuities rests on two considerations. The first is empirical findings that mental phenomena (e.g., hearing voices) associated with mental disorders are more widespread than typically assumed. The second consideration concerns those continuities’ grounding in one sort of intuitive, unconscious, automatic, instantaneous (System 1) cognition, viz., maturationally natural cognition (MATNAT). MATNAT systems address a host of cognitive tasks that are critical to individuals’ survival and that have nothing to do either with one another or with religion. MATNAT systems manage fundamental problems of human survival -- handling such matters as hazard precautions, agency detection, language processing, and theory of mind (to name but a few). The associated knowledge and skills, which recur in human minds across cultures, are not taught and appear independent of general intelligence. 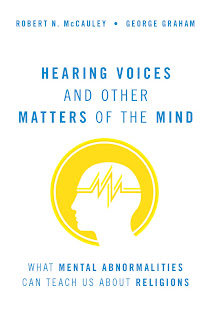 The by-product theory in the cognitive science of religions contends that much religious thought and behavior can be explained in terms of the cultural activation of MATNAT systems. Religions’ representations cue these systems’ operations and, in doing so, they sometimes elicit responses that mimic features of cognition and conduct associated with mental disorders. The book looks at three disorder-specific illustrations.

One occurs both in schizophrenia and in religions when people purport to hear voices of agents other than themselves, even though the experiences consist of their own inner speech and no other speaker is present. Appealing to a collection of MATNAT systems, including source monitoring, agency detection, linguistic processing, and theory of mind, the book provides an account of the perceived alien (non-self) source of a voice – distinguishing between what is experienced (one’s own silent speech) and how and when it is experienced as a voice of another agent (such as God).

A second disorder is a type of depression sometimes called a dark night of the soul, in which the inability of depressed participants to communicate with or sense their religions’ powerful, caring gods can exacerbate their depression. It is associated with prayers of petition that are perceived to be unanswered. Understanding the depression requires an exploration of cognitive systems (such as agency detection and theory of mind) at work in linguistic communication, but in which God is conceived as a displeased or indifferent listener.

George Graham
Third, by way of their rituals and pronouncements about moral thought-action fusion (TAF), i.e., the position that untoward thoughts are fully comparable morally to untoward actions, religions often can domesticate the concerns and compulsions of people with OCD. This peculiarly religio-moral exemplification of OCD is known as “scrupulosity.” Even more to the point, though, religious rituals and claims for moral TAF evoke, at least temporarily, similar obsessions and compulsions in the general population.

We contend that an exception (Autistic Spectrum Disorder (ASD)) helps prove the rule (the by-product theory). Exceptions only prove rules or support theoretical principles when those principles explain why the exception is exceptional. The earlier examples show how religions utilize cultural materials to elicit and frame experiences that excite the same cognitive apparatus that is implicated spontaneously in the corresponding mental disorders. By contrast, the cognitive impairments associated with ASD concerning theory of mind should, correspondingly, suggest constraints on religious understanding and inferential abilities among this population. We expect people with ASD as a population to prove exceptional on some fronts regarding some salient dimensions of religious cognition. Such negative findings here, then, do support the by-product theory.

Ecumenical Naturalism’s approach to mental abnormalities and religiosity promises both explanatory and therapeutic understanding. The book closes with a discussion of the therapeutic positive applicability of its theses about cognitive systems to disorders of religious significance.
Posted by Lisa Bortolotti at 08:00