Today's post is by Christopher Badura (Ruhr-Universität Bochum) and Amy Kind (Claremont McKenna College) on the new collection on the epistemic role of imagination Epistemic Uses of Imagination (Routledge, 2021). 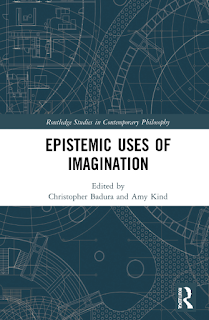 In recent years, philosophical interest in the epistemic role of imagination has blossomed.  Although there are a number of philosophers who remain skeptical, there is now considerable agreement that imagination has an important role to play in the epistemic domain.  But when it comes to the question of how best to articulate that role, or to the related question of what explains the ability of imagination to play that role, there is considerably less agreement.  These are the kinds of issues explored in the 15 contributions to our recently released volume, Epistemic Uses of Imagination (Routledge).

The idea for the volume was born in Bochum during summer 2019 when we co-organized a conference on Fiction, Imagination, and Epistemology at Ruhr University.  When we thought about what united the bulk of the talks, we realized that, in one way or another, they were concerned with explicating how imagination can contribute to justification, knowledge, and/or understanding. The talks took up this task in various epistemic contexts – some of them focused on the way that imagination functions in the modal domain, some on the relationship between imagination and reasoning, some on the role (or roles) that imagination plays in thought experimentation, and some on how imagination can help us to understand ourselves and others.

In this way, we were guided towards an organizing principle for the volume: we would aim to achieve a greater understanding of imagination’s epistemic import by concentrating in particular on these four different epistemic uses of imagination.  We brought a few additional contributors on board to round out the volume, secured a contract from Routledge, and we were on our way.

And then – COVID-19 happened.  Could we still meet our original deadline for volume submission in the midst of a global pandemic?  Was it even reasonable of us to ask our contributors to try?  We decided to push on and, somehow, we were all able to do what it took.  We’re so incredibly grateful to our 14 authors for their Herculean efforts throughout this all.  Somehow, they managed to submit their drafts in a timely fashion, to give one another excellent feedback on those drafts, to revise (and, in many cases, to re-revise), to respond to copy-editor queries, to check page proofs – and to do it all with remarkable grace. 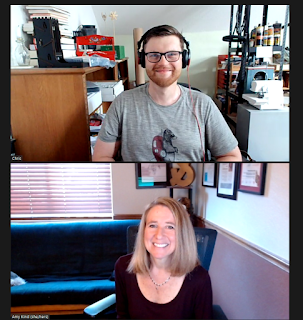 As we note in our introduction to the volume, there are several key themes running throughout the book.  We’ll here briefly mention three themes that we discuss.

One notion that has featured prominently in recent discussions of imagination’s epistemic usefulness is that of constraint.  Given that imagination, unlike perception, is not world-sensitive, it is generally agreed that imagination must be in some way constrained in order to be epistemically useful.  Imaginative projects typically start from some initial content that then unfolds to some further content.  Constraints play a role in both of these aspects of the project.  Not only must the initial content be appropriately constrained, but so too must the unfolding process.  Throughout the volume, authors attend to these issues – some attending to constraints of the first sort, some to constraints of the second sort, and some on both.

The better that an imaginer is at setting appropriate constraints on their imagination, the more likely they are to succeed in putting imagination to epistemic use. This fact brings us to a second theme that runs throughout the volume, namely that imagination is best thought of within a framework that treats it as a skill.  Setting and obeying constraints are activities that one can be better or worse at, and imagining is correspondingly an activity that one can be better or worse at. This feature – that is, the fact that people differ with respect to how good they are at it – is one of the paradigmatic features of activities that are skills.  Though the contributions in the volume are not always explicit about their treatment of imagination as a skill, we think it is implicit in many of the contributions across all four parts of the book.

Most (though not all) of our contributors are optimists about imagination’s epistemic usefulness and, more specifically, optimistic that imagination can provide an imaginer with justification.  But an important question remains. How does such justification work? This brings us to the third theme that runs throughout the volume, namely, an attempt to provide an explanation of what we might call imaginative justification. Although many of the contributions to this volume take up this theme, they do not all provide the same sort of answer.

As reflected by the orientation of the chapters in our volume, the philosophical discussion of the epistemic usefulness of imagination has at this point largely moved beyond the question of whether imagination can play an epistemic role to the question of how it can play that epistemic role.  In our view, any answer to this question will likely have to reckon with the issues arising out of these three themes that we’ve just discussed. By doing so, the chapters in this volume help address the role of imagination in epistemic contexts and thereby contribute to the development of an epistemology of imagination.  Of course, there is still considerable work to be done.

The epistemology of imagination has not progressed to a stage at which it can be compared to the epistemology of perception or the epistemology of testimony. But it is our hope that this volume contributes to that progress and, in particular, that these chapters will advance our understanding of many of the critical issues surrounding the epistemic work that imagination can accomplish.  For our part, we’re very pleased with how the volume came out, and we hope that it will prove useful not only to folks already interested in imagination but also to others who work in epistemology, aesthetics, cognitive science, and on other related questions.

Further information about the book, including a complete table of contents, is available here.  We look forward to hearing what readers think of it.