This post is by Veli Mitova (University of Johannesburg), who guest-edited a special issue of Philosophical Papers on Epistemic Decolonisation and here introduces the topic to us and presents the seven essays contributing to the special issue.

We live in an epistemically colonial world; that’s no secret. Although the Global North physically left as colonial ‘master’ long ago, it still gets to tell the Global South what counts as genuine knowledge and real science. The call to epistemic decolonisation – which is gaining increasing traction in both academia and everyday life – is the dual call to dismantle the North’s self-arrogated epistemic superiority, and to re-centre the South’s knowledge enterprise onto our geo-historical here and now. 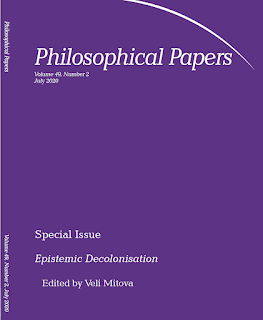 Veli Mitova, the guest editor of the special issue and the author of this post, models epistemic decolonisation on Kwasi Wiredu’s conceptual decolonisation: it involves the dual imperative to get rid of undue colonial conceptual influences and to draw on indigenous epistemic resources in our knowledge-production. She argues that this conception gets fresh light from the literature on epistemic injustice. Key concepts here are those of hermeneutical injustice, epistemic oppression, as well as the South American concept of ‘epistemic disobedience’ and its African equivalent of ‘epistemic freedom’.

Veli is Professor in Philosophy and Director of the African Centre for Epistemology and Philosophy of Science, at the University of Johannesburg.Whither Epistemic Decolonization?

Bernard Matolino issues a serious challenge to those working on epistemic decolonisation in Africa. Show why we should continue this work, the challenge goes, given that it has never benefited the victims of coloniality. On the contrary, it has instead distracted us from the political and material disempowerment of these victims, and has made them overly preoccupied with defining themselves in opposition to the coloniser. The paper, thus, sets important constraints on epistemic decolonisation: it should not be pursued at the cost either of political and economic flourishing, or of neglecting one’s rich African identity.

Bernard is Associate Professor of Philosophy, at the University of KwaZulu-Natal.Epistemic Agency Under Oppression

Gaile Pohlhaus offers a related moral for epistemic decolonisation, through considerations of epistemic oppression. Drawing on Maria Lugones’s notion of a ‘horizontal practice of resistance’, Pohlhaus argues that epistemic decolonisation should be likewise horizontal. That is, marginalised knowers should resist spending all their epistemic energy on the oppressor, as Matolino similarly urges. Instead, they should spend more energy reflecting on each other’s experiences and marginalised knowledge systems.

Gaile is Associate Professor of Philosophy at Miami University.Towards A Plausible Account of Epistemic Decolonisation

Abraham Tobi echoes the need for horizontal exchange, and diagnoses one of the epistemic ills of colonialism as the epistemic distrust of dominant knowers. Such distrust, he argues, is an epistemic vice that makes coloniality a form of epistemic injustice. This suggestion arguably sets another constraint on epistemic decolonisation: however it proceeds, it should not undermine trust amongst differently situated knowers.

Abraham is a PhD candidate in the Department of Philosophy at the University of Johannesburg.

Epistemic decolonization as overcoming the hermeneutical injustice of Eurocentrism

Lerato is a SNSF Fellow at the Centre for European Studies, University of Basel.

Nora Berenstain adds yet another dimension to epistemic decolonisation by unmasking the hidden axiology of colonial epistemologies, which place the value of civility above that of justice. Such justice would require the restoration of Indigenous lands to their rightful owners, something obscured by the rhetoric of civility and the epistemic machinery that goes with it. This not only enriches the imperative to epistemic decolonisation, but neatly links it to other forms of resistance to systematic violence against the marginalised.

Nora is Associate Professor of Philosophy and co-director of the Intersectionality Community of Scholars at the University of Tennessee.

Cognitive confinement, embodied sense-making, and the (de)colonization of knowledge

Konrad Werner construes quite literally the need for grounding knowledge production in our geo-historical here and now, by taking seriously the idea that knowers are embodied creatures in an environment that can be congenial or not to cognition. Drawing on cognitive science tools, he uses the notion of ‘cognitive confinement’ to model the central epistemic ills of colonisation as a situation in which one’s epistemic environment transforms in ways that are inimical to one’s sense-making and practical projects.

Konrad is a lecturer at the Institute of Philosophy, University of Warsaw.

This is no more than a taste for rich and subtle essays on a complex and important topic. But it at least gives an idea of the ways in which the special issue makes an important contribution to scholarship on epistemic decolonisation.
Posted by Lisa Bortolotti at 08:00