Models and Idealizations in Science

This post is by Alejandro Cassini (University of Buenos Aires) and Juan Redmond (University of Valparaiso) who recently edited Models and Idealizations in Science: Artifactual and Fictional Approaches (Springer, 2021). Here they present the book. 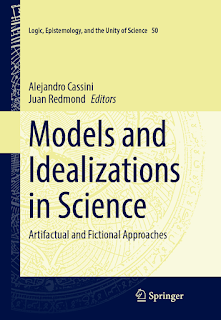 This book is intended both as an introduction to the philosophy of scientific modeling and as a contribution to the discussion and clarification of two recent philosophical conceptions of models: the artifactual and the fictional views.
The first chapter provides a rather elementary but fairly complete and extensive introduction to the present state of the philosophy of scientific models. It also offers a brief historical narrative of the rise and the early development of the philosophy of scientific models since the middle of the 20th century.
The commented bibliography at end of the book complements this narrative by offering a classified list of the main relevant books on models and idealizations in science preceded by short commentaries intended to guide the search for further readings on the different topics.
The rest of the book is a collection of ten previously unpublished articles by different philosophers of science, who deal with a wealth of topics concerning models and idealizations in science. Among the many issues they address, it can be mentioned the artifactual view of idealization, the use of information theory to elucidate the concepts of abstraction and idealization, the deidealization of models, the nature of scientific fictions, the fiction view of models defended from its critics, the structural account of representation and the ontological status of structures, the role of surrogative reasoning with models, and the use of models for predicting and explaining physical phenomena.
The pervasive use of models and idealizations in all sciences was slowly, and lately, acknowledged by philosophers of science since the last two decades of the twentieth century. By contrast, during the first two decades of the twenty-first century, there was an explosion of different kinds of philosophical studies regarding scientific modeling.
However, philosophers of science have not yet reached an agreement concerning the precise terminology to be used in dealing with scientific models and, for that reason, the vagueness and ambiguity of some key terms, such as “model system”, “target”, “abstraction”, and “idealization”, among many others, are still a hindrance for the communication between philosophers of different persuasions.
In turn, the ubiquitous concept of representation, one of the most elusive in Modern philosophy, has defied the many attempts at elucidation in the many philosophical disciplines in which it was employed, such as the philosophies of language, mind, and art.
This book also aims at contributing to the clarification of these and other concepts that belong to the toolkit with which philosophers of science address such questions as what models are, what they are used for, and how they represent -if they do it- the phenomena we encounter in the real world.
Posted by Lisa Bortolotti at 08:00