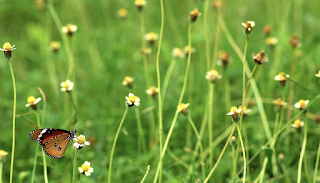 Today's post is by Dan Laidler, who introduces the notion of hagioptasia and explains why it points to something interesting about how humans interact with their environment.
Hagioptasia (meaning 'holy vision') is our natural tendency to imagine an otherworldly quality of 'specialness' in certain places, people or things. It is an evolved, adaptive psychological mechanism, which evokes in us a deep sense of longing.

“That unnameable something, desire for which pierces us like a rapier at the smell of bonfire, the sound of wild ducks flying overhead, the title of The Well at the World’s End, the opening lines of Kubla Khan, the morning cobwebs in late summer, or the noise of falling waves.”
C.S. Lewis, The Pilgrim's Regress

Like Lewis, I had also wondered a great deal on these deep, enigmatic feelings, which everyone appeared to share in a very similar manner from early childhood onwards. Although, rather than strengthen my notions of spirituality, this inquiry led me to a naturalistic explanation, culminating in my theory of hagioptasia as an evolved instinct, inspiring emotional feelings of attraction, admiration and competition.

In 2015 I made a video explaining my ideas, and with great good fortune it was seen by psychologist John A. Johnson. John was keen to test the theory, and his consequent findings were published in the journal Personality and Individual Differences.

While hagioptasia is a new concept, and this research is the first attempt at assessing it, John's work in showing that such an instinct exists is significant for enabling us to see how hagioptasic experiences have previously been misinterpreted, both on a personal and a cultural level. As is commonly the case, C.S. Lewis believed that these profound feelings of specialness were glimpses of the divine, and they gave his notions of spirituality and religion a reassuring sense of authenticity.

The ambiguous, illusory qualities of hagioptasia have clearly played major role in the development of religion, and other areas of human culture which employ the powers of mystique, glory and ‘glamour’. Likewise, our appreciation of the 'sublime' in celebrated works of art may owe far more to our evolved animal nature than any contributory intellectual prowess.

But while most of us may not be expecting the wonderment of heavenly glory to materialize any time soon, other more everyday expectations to satisfy the promises of hagioptasia inevitably lead to disappointment and frustration. The dream car, house or holiday, career success, status and celebrity may all eventually be achieved, yet the 'specialness' we yearn for exists only as a fleeting, intangible notion.

Undoubtedly the desire to attain the illusory aspirations of hagioptasia continues to be a major source of trouble for our species. However, it seems evident to me that an understanding of this instinctive drive – being aware of how and when it is influencing our thoughts and behaviours – can help us to alleviate these problems, and will enable people to use their hagioptasic experiences more constructively.