On 4th June I attended some talks at the Valuing Health Conference at University College London (see picture above), where the themes of Dan Hausman’s book, Valuing Health (Oxford University Press, 2015) were discussed. The event was organised by Jo Wolff and James Wilson. The intended audience was philosophers, economists, and also healthcare policy makers. 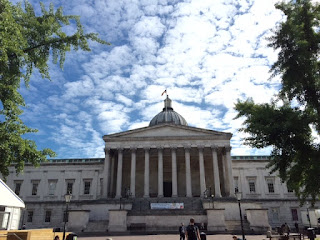 The conference started with a brief overview of the arguments in the book, presented by Dan Hausman (University of Wisconsin). There are two basic problems the book was meant to address: (1) we need to be able to compare health improvements brought by different policies; (2) we need to know what to do with the information (e.g., maximise health). Thus, the book provides answers to the following questions: How do we assign values to health states? How do we assess policies on the basis of those values? What role should people play in assigning values to policies? The discussion raises further questions about the relationship between health and wellbeing (the notion of wellbeing is clarified in chapter 6 of the book, and the distinction between wellbeing and the value of health is examined in chapter 10). 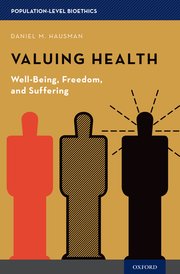 Then, Elselijn Kingma (University of Southampton) talked about the notion of health as functional efficiency proposed by Hausman. Kingma criticised Hausman’s account by challenging his naturalistic approach to the value of health. Hausman thinks that health matters because lack of health limits our opportunities and because it causes suffering, and suffering is bad. But only when the suffering is part of one’s health condition it matters for the public value of health (and the compassionate state should care). When the suffering ensues from the condition but is not part of it, it does not matter (and the compassionate state does not need to care). That implies that the distinction between pathology and non-pathology is important.

Naturalistic accounts of health start with Boorse: health is normal functioning where normal function is a causal contribution to goals, and goals are survival and reproduction. But, in some cases, we want to relativise the statistically normal causal contribution to the environment and the situation, and in some cases we do not. Hausman is not concerned about this issue, because he thinks he can solve it by concentrating on bench mark environments and functional efficiency. Kingma finds the notions of bench mark environment and functional efficiency problematic for several reasons. One issue is that what we need to be able to do is to rank functional efficiency, which cannot be done satisfactorily independent of considerations about what we value.

Adam Oliver (London School of Economics) addressed the distinction between experienced utility and remembered utility in his talk. The notion of experienced utility comes from a paper by Dolan and Kahneman, and has also been discussed by Layard in his work on happiness. The idea is that we should not simply try to satisfy people’s preferences, but focus on people’s experiences.

The argument by Dolan and Kahneman runs like this:

Hausman is not happy with this argument as the same events with the same utility for the individual can make up either a very happy or a very miserable life, depending on the overall narrative that constitutes a thread among those events. For Oliver, one notion that can help us move away from experienced utility and its simplifications is remembered utility.

When people are asked to assess past events, they focus on the peaks and the lows and do not concentrate on the utility of every single moment of the experience. This leads to some effects: duration neglect and violations of temporal dominance (e.g., people focus on the end moment rather than the whole experience).

Erik Nord (Norwegian Institute of Public Health) focused in his presentation on the public value of health, and in particular on fair deliberation and health improvements. He started by describing Hausman’s proposal about how to rank health states and criticising it for several reasons. Both Hausman and Nord agree that distress and activity limitations are the main criteria for the evaluation of health states.

But in Hausman’s account values are mainly based on the severity of the distress caused by health states, and this is motivated by the focus on compassion as opposed to fairness. Instead, Nord endorses a focus on fairness as opposed to compassion, where lower starting points in terms of utility should have priority over higher starting points, and no discrimination is made against people with disability or chronic illness. In general, Nord is sympathetic to Hausman’s project but he would have preferred if Hausman had created a new model by modifying the existing ones (that have empirical backing) rather than starting from scratch.

How can we be asked how to decide between health outcomes, given that our memory and imagination fail miserably in this context? Maybe if we could have access to first-person accounts by people with the relevant health conditions we would have a better idea about what it is like to have those conditions, and we could revise our earlier rankings.

Another thing to consider is the notion of post-traumatic growth: illness makes us and our (good) relationships stronger, does not always compromise happiness in an enduring way, and can increase our appreciation of the present by reducing the focus on the future. We tend to view illness negatively, in a monolithic way, but there is more to illness than distress and activity limitations. In recent studies, the majority of people report good quality of life despite (or sometimes because of) bad health. First-person accounts can reveal features of living a health state that are otherwise invisible or impossible to imagine. Also, they can help us appreciate that health may not be so important for happiness. 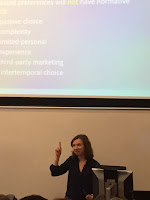 The last talk I listened to was by Anna Alexandrova (University of Cambridge), in the picture above, who also explored the relationship between health and wellbeing. There are two objections to the enterprise of measuring wellbeing: ethical objections (we want to measure wellbeing primarily to control people because wellbeing is a powerful tool to predict productivity); epistemic objections (we want to measure wellbeing but we cannot do so effectively, because preferences interfere and examined mental states are not relativised to an individual's situation).

Alexandrova asked whether the latter objection (raised by Hausman in his book) can be met by focusing on the psychometric approach, which consists in defining the thing to be measured, doing some field testing by consulting expert panels, and ensuring construct validity. The approach guarantees that the thing to be measured behaves in a way that accords with the theory one has about the thing. If what is measured is not something that philosophers identify with wellbeing, who cares? Ultimately, Alexandrova found faults with the practice of construct validation which seems to be a black box where only correlations matter, and a way to avoid developing a theory about the thing that one wants to measure.

Two more talks followed and unfortunately I was not there to enjoy them, but I thought the part of the conference I attended was very successful in keeping a truly interdisciplinary audience engaged with themes of practical relevance and theoretical interest.