The Causal Role Argument Against Doxasticism About Delusions

This is the second in a series of posts on the papers published in an issue of Avant on Delusions. Here Kengo Miyazono summarises his paper (co-written with Lisa Bortolotti) 'The Causal Role Argument Against Doxasticism About Delusions'. 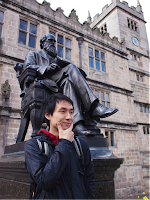 Doxasticism about delusion is the claim that delusions are beliefs. Delusions are usually regarded as beliefs in psychiatry. For instance, in the DSM-5 delusion is defined as a 'false belief based on incorrect inference about external reality that is firmly held despite what almost everyone else believes and despite what constitutes incontrovertible and obvious proof or evidence to the contrary' (American Psychiatric Association 2013: 819). Moreover, cognitive scientists working on theories of delusion formation assume that the mechanisms responsible for the formation of delusions are also the mechanisms responsible for the formation of beliefs (Coltheart 2007; Corlett et al. 2010).

However, doxasticism is not very popular among philosophers. Greg Currie and colleagues (Currie 2000; Currie and Jureidini 2001) argue that delusions are not beliefs but imaginings. Andy Egan (2009) thinks that they are 'bimaginations' (i.e., they are the states with some belief-like features and some imagination-like features). Eric Schwitzgebel (2012) suggests that they are 'in-between beliefs' (i.e., they are not beliefs, but not non-beliefs). Jakob Hohwy and colleagues (Hohwy and Rosenberg 2005; Hohwy and Rajan 2012) propose that they are perceptual inferences.

Here, 'belief-roles' refers to the distinctively belief-like causal roles. Premise (2) is entailed by functionalistic theories of belief, including representational functionalism and dispositional functionalism. Eric Schwitzgebel (2012) calls them 'token-functionalisms'. Premise (1) is supported by clinical observations. It is commonly assumed that playing belief-roles includes being more or less sensitive to evidence, being more or less coherent with other beliefs and guiding action in relevant circumstances. What clinical observations often reveal is that delusions lack these features.

In our new paper 'The Causal Role Argument against Doxasticism about Delusions' Lisa and I (pictured above) critically examine the argument from causal role and show that its premises might be resisted.

Firstly, they tend to idealise belief-roles in such a way that 'playing belief-roles' is almost synonymous with 'being a rational belief'. If we are committed to this idealisation of beliefs, it is not difficult to give good evidence for premise (1), because it can be easily shown that delusions are not rational beliefs. But the problem with idealising beliefs in this way is that many non-delusional beliefs would also fail to play belief-roles and, hence, we would need to accept anti-doxasticism about them too. And, if we are not committed to the idealisation of beliefs, then it is not obvious that clinical observations give good evidence for premise (1).

Secondly, anti-doxasticists tend to argue that premise (1) is strongly supported by the fact that delusions sometimes fail to guide action. This argument ignores the possibility that failure of action guidance can be explained by hypotheses that are perfectly compatible with doxasticism, such as the hypothesis that the capacity to acquire or preserve motivation is compromised in people with delusions, especially in the context of schizophrenia.

Premise (2) can also be resisted.

Secondly, premise (2) is usually accepted by anti-doxastic philosophers simply because it is entailed by the functionalist theories of belief they accept. However, there might be some alternative theories that do not entail premise (2). Lewis's theory is an example. In addition, teleo-functionalism (Lycan 1987; Sober 1985), according to which beliefs are the mental states with some belief-like functions, is another example. As long as there are some theories of belief, with some independent motivations and virtues, that do not entail premise (2), anti-doxasticists cannot assume the truth of premise (2) simply because it is entailed by their favourite theories.