On 15th-16th October 2015 the University of Leeds Minorities and Philosophy chapter hosted the MAP@Leeds Implicit Bias Conference. The conference included a large number of high quality talks covering a wide-range of issues relating to implicit bias. This report focuses on three of these talks. 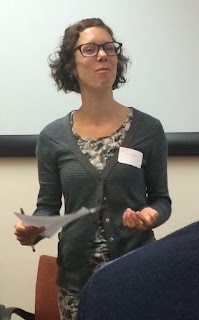 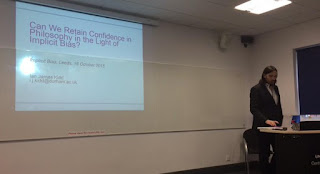 In his talk, Ian James Kidd (pictured above) asked “Can We Retain Confidence in Philosophy in the Light of Implicit Bias?” He emphasised a number of different forms of confidence that might be threatened by knowledge of implicit bias: confidence in oneself as a philosopher; confidence in other philosophers, or philosophers as a collective; and confidence in philosophy’s agenda, heritage and future. He argued that the aggressive adversality in philosophy, which is slave to psychosocial biases, has the potential to be particularly damaging to each of these forms of confidence. Moreover, discoveries about implicit bias present a threat to the authority of reason and the idea that philosophers identify solid foundations for knowledge through the philosophical enterprise. However, Kidd argued that discoveries about implicit bias also have a positive impact: they highlight the advantages of an ancient vision of philosophy’s nature and purpose, according to which it involves identifying objects that prevent flourishing, and then identifying and implementing ameliorative strategies that facilitate flourishing. Philosophy, on this view, can be seen as improving understanding in order to facilitate the transformation of how people live. With regards to implicit bias, philosophy allows understanding of implicit bias and facilitates transformation of the ways in which people live that are related to implicit bias. 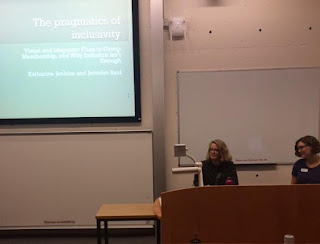 In their talk on “The Pragmatics of Inclusivity” Katharine Jenkins and Jennifer Saul (pictured above) focused on ways to improve philosophy teaching.  They argued that it is important to diversify syllabi, so that more of the ideas of members of minority groups are represented. However, they argued that additional action is required to successfully combat the negative effects of phenomena such as implicit bias and stereotype threat. They argued that it is necessary to emphasise the social group membership of members of minority groups where their work is taught, e.g. when teaching about the work of a Black female one might highlight her gender and racial group membership. They recognised, however, that statements such as “here is Joan Smith, she is Black” could produce unintended conservational implicature, suggesting to students that there is something negative about being female or Black. They argued that it is necessary to cancel this implicature by explicitly stating why it is that the social group membership of the individual is being emphasised, i.e. to combat the negative effects of biases.

Congratulations to the organisers of this conference for bringing together so many excellent philosophers working at the cutting edge of this extremely interesting topic.