This post is by Alex Miller Tate (pictured below), PhD student at the University of Birmingham. His work investigates the nature of mental illness and emotion, using insights from research into Situated Cognition. His thesis examines the role that situated theories of cognition and emotion can play in explaining and describing various symptoms common in major depression. 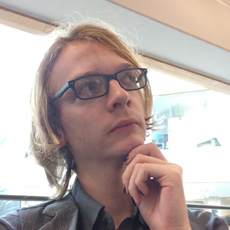 Anhedonia is a core symptom of many Psychiatric conditions, most commonly presenting in patients diagnosed with a depressive disorder or schizophrenia (Oyebode, 2014). It is most commonly defined as an absent or diminished ability to experience pleasure from participating in previously enjoyable activities (Treadway & Zald, 2011: 538). As an example, somebody who used to enjoy playing football and listening to David Bowie, but no longer enjoys either of these things, may be said to be exhibiting Anhedonia.

One popular theory of Anhedonia, call it sustainability theory, argues that it is characterised by a diminished ability to sustain pleasurable responses to rewarding stimuli (Tomarken & Keener, 1998; Heller et al., 2009). The immediate response to a stimulus is relatively undiminished, but enjoyment cannot be sustained. My work aims, roughly, to bring the sustainability theory together with the Situated Cognition paradigm, to see what insights into Anhedonia a situated sustainability theory might offer.

My attempts to do this have centred around the notion of affective scaffolds; aspects of our environments that significantly shape our emotional experiences and dispositions (Griffiths & Scarantino, 2009). For instance, music at a funeral may be chosen so as to support the elicitation of sadness in the moment (a synchronic scaffold) and my emotional response of sadness at funerals is (in part) structured by what I have learned is socially expected of me at funerals (a diachronic scaffold).

I draw a comparison with studies that suggest that work classically attributed to internal cognitive processes is better thought of as being offloaded into the agent’s environment via bodily interaction. For instance, skilled bag packers in grocery stores in the USA arrange items spatially by category (heavy, fragile) as they come off the conveyor belt. This later allows for an optimal distribution of items across bags without placing an extreme load on working memory. We might think of the spatial arrangement of items as functioning as a cognitive scaffold for the bag packer; it is an external structure that greatly reduces the task-burden on internal cognitive resources.

If we take it that pleasurable responses to stimuli often come in the form of positive emotions or moods, then a situated sustainability theory might characterise Anhedonia as the inability to sustain interactions with positive affective scaffolds. This reframes Anhedonia as a disorder of emotional regulation; specifically a shrinking of a person’s ‘affective support network’, and an increasing burden on internal, rather than external, mechanisms of affective regulation.

This theory has a couple of interesting consequences. To my mind, the most important is to be found in the fact that it explicitly characterises Anhedonia relationally. Anhedonia is characterised by a lack of interaction between a person and crucial affective supports in their environment. Consequently, unlike the predominantly neurobiological perspective presently taken to the sustainability theory, it explicitly leaves open the possibility that changes in either the agent or the environment may cause the requisite disruption.

On this picture, there need not be any consistent, detectable neurobiological substrate of Anhedonia. Thus the account may, with further refinement, provide part of the theoretical support for projects (for instance, the Midlands Psychology Group, or Psychologists Against Austerity) that wish to offer an environmental alternative to neurologically-focused explanations of Psychiatric symptoms.