Today's post is by Liz Atkin (pictured below) who is an artist and advocate for Compulsive Skin Picking. To learn more about Liz and what she does, you can access her YouTube channel, listen to her being interviewed by Ted Meyer in 2015, or read this detailed feature in Like-Minded. The post is illustrated with some of Liz's beautiful artworks. 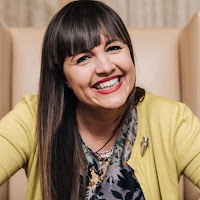 Anxiety is now sited as one of the most common of mental illnesses but some anxiety disorders, Body-Focused Repetitive Behaviours such as Compulsive Skin Picking (CSP or Dermatillomania) and Hair-pulling (Trichotillomania) are seldom recognised and treatment is very hard to access. They are much more common than initially thought and among the most poorly understood, misdiagnosed, and undertreated groups of disorders. BFRBs may affect as many as 1 out of 20 people.


Compulsive Skin Picking is a complex physical and mental disorder that often develops in young childhood. It provides comfort, pleasure or emotional release from endlessly picking at often healthy skin but this can often lead to bleeding, infection, scarring and physical deformities, as well as significant emotional and mental distress.

I have lived with Compulsive Skin Picking since I was 7 or 8 years old. For me, from a young age, it was an unconsious action, as well as concious. For more than 25 years it totally dominated my life behind closed doors. My body was littered with wounds and marks beneath my clothes. At it's height, I would regularly lose 5 or 6 hours picking my skin. Some nights I would pick until the early hours of the morning, I would even pick in my sleep. Many times I would be poised at the bathroom mirror, a private space. No one knew about it. I masked and covered the illness from those closest to me, wearing clothes that concealed the parts of my body covered in scabs and scars, making excuses and even using make-up on my body to mask it. 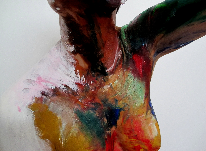 I experienced intense anxiety, followed by guilt and shame about something I was doing that caused harm to my own body yet felt no control or ability to stop. I suffered in silence for a very long time. The illness was actually undiagnosed until my early 30s, and it was only through internet searches that I realised it had a name. I had even hidden it from various Drs over the years. I got to a point where I didn’t want this illness controlling me anymore. There were perpetual cycles of shame, embarrassment and anxiety and I had no choice really to try and help myself because it was destroying me.

But the body has always been my fascination for me. I had studied dance and drama throughout my education and in my early 30s I signed up for a Masters in Dance, and it was then that I found I had to confront the illness head-on. Studying movement meant I could no longer avoid the picking. As part of the course, were encouraged to study our everyday movement patterns. For the first time I looked at how this illness dominated my physicality. Very slowly I began to document what the illness had done to my body. I began to recognise the illness was a unique dance, and that I could turn it into something else, something creative to move away from the harm it was doing to me. Though dance I was able to express things I didn’t have language for and channelled the specific movements of the illness across my body into something positive.

I began making artwork through film and photography, using the skin as a soft canvas and terrain for imaginative transformation and healing. I explored the way my body moved; I used body-focused repetitive behaviour as an art practice and miraculously began to get better. I now create artworks with textural materials like latex, clay, acrylic paint to transform the skin. I have exhibited my artwork in therapeutic settings and galleries all over the world, including Japan, Los Angeles, Melbourne and London. 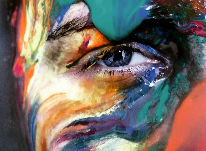 Skin picking dominated my life but there are ways to recover. CBT and medication can be prescribed through your GP. I use my experience of CSP not only to inspire and contribute to my own artistic work and development, but allow me to normalise, manage and improve the condition. I developed an understanding of the body and use my artistic practice to keep well, and I now have some degree of control over my condition. The marks and scars will always be with me, but many are fading and I now see them as being an important part of the tapestry of my lived experience, as well as inspiration for my artwork.

I am now freelance artist, teaching in all kinds of settings. I am an advocate for this disorder and raise awareness for Compulsive Skin Picking and mental illness through public talks, specialist commissions, residencies and exhibitions around the world. My story and art has been profiled in features and interviews for BBC Breakfast, BBC World Service Outlook, BBC Radio 4 Woman's Hour, Al Jazeera TV and BBC Arabic TV’s art programme Afaq.

In the UK I have also spoken for Critical Voices Conference, Depression Alliance, Dragon Café / Mental Fight Club, Royal Society of Public Health. I was part of discussion panel for Changing Minds, a festival for mental health at Southbank Centre. 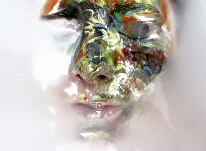 International advocacy includes a week in California in October 2015 to coincide with my first USA solo exhibition at the UCLA David Geffen School of Medicine. I spoke to medical students and health professionals at Keck School of Medicine at Univerity of Southern California, dance students at University of California: Santa Barbara and patients at The OCD Center of Los Angeles.

My work has also featured in an article on Body Dysmorphic Disorder and art for VICE UK (Dec 2015), Diva Magazine (Feb 2016) and Marie Claire UK (2016). In 2016 gave the keynote address at the Global Conference for Skin Picking and Hair Pulling Disorders in Dallas Texas for the TLC Foundation for Body Focussed Repetitive Behaviours.