In this post, Valeria Motta reports from the workshop Cognitive Decline: Presentations and Representations.

The event took place at Thinktank, Birmingham Science Museum, and was jointly organized by students from Biomedical and Natural Sciences and students from Liberal Arts of the University of Birmingham. The event was offered under the initiative called Café Culturel.

This initiative proposes multidisciplinary discussions on topics of current interest from the arts and the sciences which emerge from the cultural offerings in and around the area of Birmingham. Expert panellists are invited to give 10 minute presentations after which there is room for questions and discussion with the audience. The events are open not only for students but also for the general public; and the talks are meant to reach such wide audience. 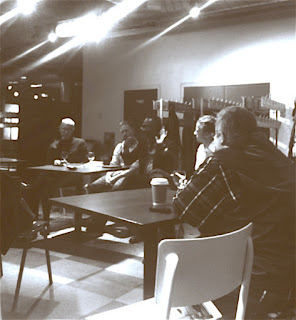 In October, the Royal Shakespeare Company presented King Lear on Stratford-upon-Avon. On the occasion of this visit, the event Cognitive Decline: Presentations and Representations proposed a discussion on the topic of how neurodegenerative diseases are represented in the arts and in the clinical sciences.

Neuroscientist Emil Toescu explained that King Lear has been regarded by the critics as a tragedy of a powerful figure whose material and mental world fall apart piece by piece, and that Lear’s journey could be interpreted an acute depiction of the behavioural changes associated with the cognitive decline produced by degenerative mental diseases.

One of the members of the panel was Dr. Femi Oyebode, Professor of Psychiatry at the University of Birmingham and Consultant Psychiatrist for Birmingham and Solihull Mental Health Foundation Trust. Oyebode provided conceptual precision on mental disorders, and talked about what he thinks psychiatrists, Shakespeare and theatre audiences share.


Oyebode explained that dementia is set of symptoms caused by a degenerative brain disease which is progressive and impairs the cognitive domain of the brain. He then distinguished dementia from delirium in that dementia features certain awareness. When asked, Oyebode described the state of awareness as some sort of ‘insight’ which is different from what could be described as a conscious state.

Oyebode's last book Madness at the Theatre investigates the representations of psychiatric disorder(s) in the western theatrical arts from ancient till present times. Oyebode talked about how both psychiatrists and dramatists are concerned with describing and portraying extreme mental states. He explained that Shakespeare’s description of Lear’s awareness of his own cognitive decline is a good example of descriptive psychopathology of the disintegrative disorder in theatre.

Oyebode drew attention to the interesting fact that there was something that made the play be understood and attractive to audiences in the early 600s even when his audience lacked the expertise in disintegrative disorders that have nowadays. Oyebode called this a ‘prior understanding’ which could possibly be explained by Shakespeare using the same system of meaning (perhaps linguistic frame) that his contemporaries were using.

The second member of the panel was artist Tom de Freston. After completing his Creative Fellowship at the University of Birmingham, de Freston became the Artistic Director at the Wellcome Trust Medicine Unboxed. The artist’s recent work is inspired by Shakespearean themes having painted different interpretations of King Lear’s character Poor Tom. Emil Toescu describes Poor Tom as “a figure of poverty and madness who could personify the disintegration into which the world of the play descends”.

de Freston also talked about one of his latest experiences when being commissioned for producing a triptych of paintings representing the Dover Cliff scene in King Lear. The scene, as is described by de Freston  shows character Edgar, in the guise of Poor Tom, taking his suicidal father to the edge of an imaginary cliff, from which the old man jumps. The artist explained that the scene represents the verge between existence and non-existence, of being and not being. For this commissioned work, de Freston explained that he used clay to help him to physically experience the various exits and entries in a body and create the transformation from one character to the other. The artist saw this as a scene which describes the experience of what it is to lose oneself completely and become another. And equated this to what it can be like for people to undergo an experience of cognitive decline when they lose themselves to become something different.

After reflecting on in-world experiences of transformation, de Freston also mentioned other elements that can function as trauma triggers for characters and actors and which are beyond the mind and body limits. In the story of King Lear, examples of outside world trauma triggers are the betrayal of two of his daughters and the loss of both his kingdom and of his beloved daughter Cordelia. The world as Lear knows it, starts vanishing, its architecture and its meaning getting lost.

As Toescu put it in his closing remarks, themes emerging from changing political scenes and state and family breakdown, such as the ones Lear experiences, are worth reflecting upon in our own contemporary times.