New Directions in the Philosophy of Memory Workshop

In this post Kourken Michaelian and Chloe Wall report from the workshop New Directions in the Philosophy of Memory.

Funded by a generous grant from the University of Otago's Division of Humanities, researchers from Australasia and Europe gathered in Dunedin, New Zealand on 25-26 October 2016 for a workshop on New Directions in the Philosophy of Memory. The workshop, organized by Kourken Michaelian, was the second of two events linked to a planned book—edited by Michaelian, Dorothea Debus, and Denis Perrin—featuring papers describing new lines of research in this burgeoning field; the first was held at the University of Grenoble earlier in 2016 as part of a broader interdisciplinary event. 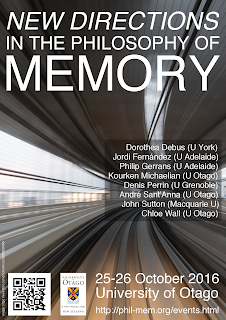 Finally, Jordi Fernández, in “Functionalism and the nature of episodic memory”, pointed to a number of problems for existing causal and narrative theories of remembering. The talk then developed an alternative functionalist theory designed to avoid these problems.
The first day of the workshop was followed by a public talk, delivered by John Sutton, on “Situating cognitive futures (and pasts): Small groups and shared histories”. 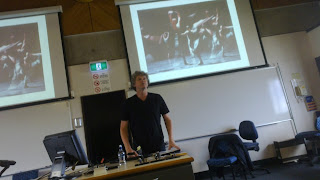 Philip Gerrans' “Subjective presence in mental time travel” discussed empirical work challenging the view that the default mode network is necessary for self-awareness in remembering. By considering the computational nature of the production of self-awareness, he claimed, we learn that it is not affective processing in the anterior insular cortex but rather predicted affective processing that generates self-awareness.
Chloe Wall, in “Are memory and testimony analogous?”, sketched an analogy between memory and testimony. After considering a variety of objections based on intentionality and mindreading, she argued that these objections do not succeed in undermining the analogy. 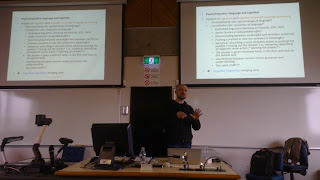 The second day of the workshop was followed by another public talk, delivered by Denis Perrin, on “Memory and anaphora”. Both attendance at the public talks and the lively atmosphere of the workshop itself indicated growing interest in and awareness of the philosophy of memory as an increasingly dynamic research area.