Simple Rules to Cope with a Changing Climate 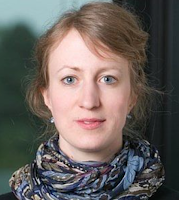 The following post is by Astrid Kause (pictured above), who recently completed her PhD at the University of Konstanz, in South of Germany. She continues her research at the University of Leeds (UK), investigating how individuals grasp and behave in face of uncertain phenomena like climate change. In this post, she discusses from a psychological perspective why this uncertain and complex problem does not require a complex solution – but how simple prescriptive decision strategies might help us to behave better in face of climate change.

Climate change is considered one of the most challenging problems humanity has to solve in the 21st century (van der Linden, 2015). What makes it so particularly difficult to grasp climate change? After all, we experience changes in extreme weather like rainfall, learn about climate change consequences like rising sea levels, hear scientists and politicians call for action against climate change or rather sceptic voices downplaying need for action. One reason is that when individuals try to understand climate change, they face various kinds of uncertainty. A second reason might be that they lack concrete strategies of how to behave in face of these uncertainties.

What are the sources of uncertainty we face when trying to understand climate change? We don’t know what we don’t know. Domains of climate sciences largely differ in how well established their findings are. For example, the general mechanisms of human influence on global warming are virtually certain and backed up by an overwhelming scientific consensus (Cook et al., 2013). In contrast, how exactly humans will influence the climate in the future, how the climate system reacts and how this then affects subsequent behaviors is difficult to predict (Schellnhuber, 2015).

As individuals, we are not aware of all factors that have been revealed as influential on the climate system. This is because individuals access different information sources: For example, in different countries, scientific predictions on a changing climate might be communicated differently in the media. Also, our own experiences might only reflect some change of climate – experiences naturally differ between for example citizens in the UK and Northern Africa.

We don’t know exactly how simplistic or biased our individual mental models of the climate system are. Such simple models might not reflect that the climate system is complex and dynamic and action does not immediately result in consequences. For example, conceptualizing the rather complex circulation of carbon emissions in the atmosphere with the water flow in a bathtub, helps individuals to substantially better understand the issue. However, such a model implies a linear and immediate relationship between in- and outflow of emissions (Sterman, 2008; Galesic, Kause & Gaissmaier, 2016) and does neglect for example time lags.

Consequently, if climate change is burdened by such different kinds of uncertainties, and if knowledge about consequences of our action is imperfect – does collective individual behavior have an influence on climate change, and if so how?

From the perspective of climate sciences, changes in behaviors of collectives provide substantial carbon savings potential (Dietz et al., 2009): Significant shares of global emissions are associated with the livestock sector (Stehfest et al., 2009; Hedenus, Wirsenius & Johannson, 2014), or energy usage in households (Gardner & Stern, 2008). Many people already acknowledge that environmental issues pose a serious threat to the planet but only few have already adopted their behaviors (European Commission, 2011). Which strategies might help coping with uncertain and complex climate change?

One way to motivate behaviour change might be to teach individuals simple and robust decision strategies – instead of bombarding them with various abstract dimensions of climate impacts of behaviors (Artinger, Bortoleto & Katsikopoulos, 2016; Galesic, Kause & Gaissmaier, 2016). According to decision sciences, in uncertain environments, simple decision strategies often perform better than more complex ones: They are robust to a wide range of scenarios, easily integrate the most relevant pieces of information and reflect that only very few pieces generalize to the future (Gigerenzer & Gaissmaier, 2011).

Such rules are potentially useful in various domains of daily life, like “for saving energy, reduce warm water use”, “eat seasonal” or “eat rather white than red meat”. Within those domains, they generalize across different situations where in each, individuals might pursue various goals. They allow them to flexibly evaluate these goals and e.g., decide to eat meat in a restaurant, but not when cooking daily meals at home. When individual goals are heterogeneous, such simple prescriptive rules are preferable to a 'one-size-fits-all-nudge' (Grüne-Yanoff & Hertwig, 2016). In sum in face of limited knowledge due to various uncertainties, this simple, intuitive and flexible design of decision environments might thus provide a fruitful way for encouraging more climate-friendly choices.