Catherine Z. Elgin is Professor of the Philosophy of Education at Harvard Graduate School of Education. She is the author of Considered Judgment, Between the Absolute and the Arbitrary, With Reference to Reference, and (with Nelson Goodman) Reconceptions in Philosophy and Other Arts and Sciences. In this post, she talks about her book True Enough. 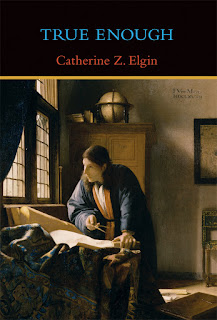 Epistemology valorizes truth.  There may be practical or prudential reasons to accept a contention that is known to be false, but it is widely assumed that there can never be epistemically good reasons to do so.  Nor can there be epistemically good reasons to accept modes of justification that are not truth-conducive.  Although this seems plausible, it has a fatal defect.  It cannot accommodate the cognitive contributions of science.  For science unabashedly uses models, idealizations, and thought experiments that are known not to be true.  Nor do practicing scientists think that such devices will ultimately be eliminated.  They expect current models to be supplanted by better models, but not by the unvarnished truth.  Modeling, idealizing, and thought experimenting are considered valuable tools, not unfortunate concessions to human frailty.

Such devices are, I contend, epistemically felicitous falsehoods. They are not mere heuristics. They are central components of the understanding that science supplies. If it is to accommodate science then, epistemology must relax its allegiance to truth.  True Enough develops a holistic epistemology that does so. It acknowledges that tenable theories must be tethered to the phenomena they concern, but denies that truth is the sole acceptable tether.  Felicitous falsehoods figure in understanding by exemplifying features they share with their targets.  They highlight those features and display their significance.  A model like the ideal gas, although strictly true of nothing, highlights important features of actual gases, while sidelining confounding features that for the purposes of a given inquiry make no difference.

On this picture, the center of epistemological gravity shifts from knowledge to understanding.  In science and other systematic inquiries, relatively comprehensive bodies of epistemic commitments -- some true, some felicitously false, some not even truth-apt -- stand or fall together.  Rather than accepting the kinetic theory of gases because she already accepts each of its component commitments, an agent accepts those commitments because they are part of a theory that is, on the whole, acceptable.

What makes for acceptability?  Once truth is dethroned, truth-conduciveness falls as well.  But not every mutually supportive network of commitments is worthy of acceptance.  A well crafted but unfounded conspiracy theory might consist of mutually supportive elements.  That would not make it acceptable.  Drawing on Kant, I develop a deontological account of epistemic norms.  I urge that a commitment is epistemically acceptable just in case it would be reflectively endorsed by the legislating members of a realm of epistemic ends.  This replaces reliabilism with a form of epistemic responsibilism.

I identify the normative conditions responsible epistemic agency.  Members of a realm of epistemic ends have obligations to one another that are simultaneously moral and epistemic.  Objectivity is decoupled from truth.  Roughly, a procedural is objective just in case any qualified agent who performed it would get the same result to within the margin of error.  A result then is objective if it is a product of such a procedure.

Works of art deploy the same devices as felicitous falsehoods in science.  Thought experiments are tightly controlled fictions.  Like models, non-representational works exemplify and afford epistemic access to features that we might otherwise miss. Idealizations can appear in works of art as easily as they do in works of science.  Thus, I urge, the arts embody and advance understanding if the sciences do.  My position thus vindicates the often expressed but seldom justified claim, we learn something important from our encounters with art.