I am Neil Levy, Professor of Philosophy at Macquarie University and a Senior Research Fellow at the Oxford Uehiro Centre for Practical Ethics. These days I work mainly in philosophy of psychology and mind and applied ethics. Find out more about my work here. This is a precis of "Am I Racist? Implicit Bias and the Ascription of Racism," recently published in Philosophical Quarterly. 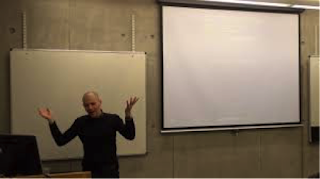 Implicit bias has recently received a great deal of high quality attention from philosophers. Papers have probed their nature, how their effects can be countered and their implications for ethics and for epistemology. In moral philosophy, the question that has dominated has been whether agents are responsible for actions partially caused by them.

But little space has been given to the question of how we are to characterize agents who harbor them. The agent who is explicitly sexist is a misogynist. But what about the agent who is only implicitly sexist? I explore this kind of question, focusing on implicit racism (and supposing that my IAT results are accurate, and I harbor mild implicit biases against Black people). In virtue of that fact, and given my explicitly egalitarian attitudes, am I racist?

Obviously, answering that question requires an account of what racism consists in. There are a variety of accounts in the literature. Simplifying greatly, according to cognitive accounts of racism, to be a racist is to have racist beliefs. According to affective accounts, a racist is someone with racist emotional responses (say contempt for members of other races), while behavioural accounts emphases, naturally, behavior (obviously, disjunctive or conjunctive accounts are also possible options). Rather than attempt to adjudicate between these competing accounts, in my paper I explore how those who harbor implicit biases stack up on each of them.

I can appeal to my own earlier work in trying to ask whether those with implicit biases count as racists on a cognitive account. There are various accounts of what beliefs consist in, but the only one that is a viable contender for showing that implicit biases are beliefs is one that identifies beliefs with structured representations. If our implicit biases have the right kinds of structural properties – which entail dispositions to inferential promiscuity and evidence sensitivity – then they are beliefs, on this account.

Most psychologists have argued, or assumed, that implicit biases are structured associatively but Eric Mandelbaum has shown that they are wrong. Implicit biases interact with other attitudes in ways that entail that they have some propositional structure. But we should not follow Mandelbaum and conclude from the fact that they are not mere associations that they are beliefs. Despite having some propositional structure, they seem to fall short of being beliefs: they fail to respond to evidence when they should, if they were beliefs, and also respond to stimuli when they should not. We can therefore conclude that they are not beliefs.

They are, however, beliefy: somewhat belief-like. If the cognitive account of racism is correct, implicit ‘racists’ aren’t racists. But they’re not clearly not racists, either. The right answer to the question “am I racist?” is probably “somewhat”.

Something similar, if weaker, is true on the behavioural account too. Implicit biases matter, at least in the main, because they are implicated in behavior: even well-meaning egalitarians may act in sexist or racists way due to their biases. But explicit attitudes are much better predictors of behavior than implicit. How much better is open to dispute: the lowest estimate holds that implicit attitudes account for only 2.2% of variance in behavior. Some people have concluded from this claim that implicit biases don’t matter. That’s a mistake: at a population level, they predict innumerable racist decisions and actions, and some of these actions may be very significant (ranging from wrongly thinking that the male, or the white, candidate is clearly better qualified than the female or the minority candidate to opening fire on the suspect).  Implicit biases are not trivial, but they do seem to entail that those who are harbor them are not, on behavioural accounts, racists. We are not, however, entirely off the hook either.

It’s hard to know what to say concerning the affective account of racism. Affects are, notoriously, resistant to top-down control, which seems to suggest that they will tend to align with implicit processes. But they are also often downstream of controlled processes: I feel outraged, say, because I judge that someone has been treated unfairly. I know of no evidence that allows us to estimate the relative contributions of these different kinds of processes, and therefore of the significance of the role of implicit processes in affect. In the absence of such evidence, I turn to the content of our affective responses.

One well-known test for implicit bias (the Affect Misattribution Procedure) relies on them triggering affective responses. But it also relies on these responses being subtle enough to misattribute to a neutral stimulus. The affects in question are certainly normatively criticisable, but their relative mildness seems to fall short of the kinds of affect that have been suggested to constitute racism (such as hatred or ill-will). Again, the answer to the question “Am I racist?” seems to be “a little bit”.

The accusation of racism rightly carries with a great deal of moral freight. It is not one that we should level at one another lightly. Nor, however, can we be complacent about racism, in ourselves or in others. Even among egalitarians, implicit biases are common. Avoiding negative effects on vulnerable others is obviously the most urgent task they set us, but to the extent that we are racists we are also set the task of remaking ourselves.