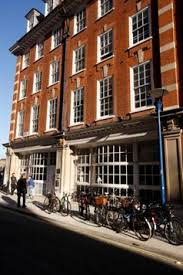 Christian List organised a two-day workshop on Reasons, Rationality, and Intentional Agency in the Lakatos Building (picture above) at the LSE on 29th and 30th September 2017. I was lucky enough to attend three talks on the 29th, and here is a brief report. The event was funded by the Leverhulme via a Leverhulme Major Research Fellowship awarded to List. 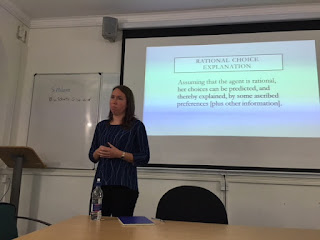 Kate Vredenburgh from Harvard (picture above) opened the workshop with a paper entitled “Rational Choice Explanation”. She started with the observation that choice-frameworks have been criticised a lot recently. Especially, the revealed preferences approach, according to which statements about preferences are summaries of choice behaviour, has been criticised on the basis that it cannot provide causal explanations and action explanations. Vredenburgh's main thesis was that, if revealed preferences theorists adopt a unificationist theory of explanation, then they can avoid some of the problems.

We can resist this assumption by adopting a unificationist account of explanation where all the explanation does is systematise the information about the phenomenon. The revealed preference relation explains by efficiently fitting individual choices into a pattern of choices. According to Vredenburgh, unificationism matches well the spirit of the revealed preferences approach because preferences fail to tell us something about choices that is not already implicit in the choices themselves. 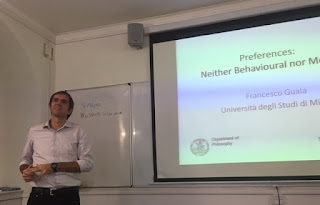 Francesco Guala from Milan (picture above) presented a paper entitled “Preferences: Neither Behavioural nor Mental”. In the old behaviourist approach (1900-1950) the attempt was to do without any psychological concept, and preferences were reduced to observed choice behaviour. There is an ambiguity in the view: are preferences revealed by behaviour or are they just behaviour? The latter position is not held by many.

For Guala behaviourism is untenable but mentalism is not a good option either. So we need a third way. The untenability of behaviourism is due to the fact that two people can make the same choice but have very different preferences. And this has already been shown. But the inadequacy of mentalism needs to be argued for, and this is the purpose of the talk. Guala talks about preferences as dispositions, where for S to have a disposition to B is for S to be disposed to do B in C. Dispositions do not give us the details of the causal process, but they are informative. Dispositions don’t tell us about causal bases, but looking at causal bases is useful to establish how to model dispositions.

There is no reasons we exclude from choice theory decisions made by robots, organisations, animals, etc. Choice theory can be applied to the behaviour of all the systems that have the following characteristics: S has conflicting goals and there are trade-offs to make; and S resolves the conflict by weighing pros and cons. But the weighing of the pros and cons does not need to be in the human brain. So the preferences economists are interested in are not mental, they are dispositional properties with different causal bases (in humans these are psychological states, which means that you need to study them using the resources of psychology; but in other creature they may be something else). 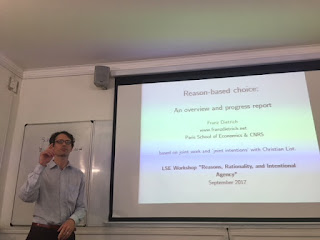 Franz Dietrich (CNRS & PSE) talked about “Reason-based choice: An overview and progress report”. He argued that there are two paradigms about choice: ranking-based vs. reason-based.
According to the ranking-based approach, we do something because we rank it highest. According to the reasons-based approach, we do something following our best reasons. Dietrich prefers the reason-based model he developed with Christian List.

There are three problems with ranking-based explanations of choice:

· Empirical problem. This kind of explanation for actual choice has been falsified because we are not as rational as the model suggests.

· Predictive problem. An ordering of the options does not help us make predictions that are non-trivial. We cannot make predictions in novel contexts on the basis of preferences. (This is the problem that would most interest economists).

The reasons-based explanation Dietrich favours says that each option has several properties: option properties (e.g. the sweet is healthy); context properties (e.g. there are 12 sweets in the basket); and relational properties (e.g. the sweet is the smallest sweet left in the basket). An agent’s choice is explained by a reason structure: a motivational salience function (which for each context specifies the motivationally salient properties of an option) and a preference relation between property bundles (e.g. politeness trumps the preference for healthy sweets). For each choice there are several reason structures that could explain that choice (underdetermination). Which explanation is chosen is determined by (1) psychological accuracy; (2) prediction in novel contexts; (3) welfare judgements.

It was a very informative morning session, with some interesting overlap among the talks!